The One with the Power

The winds and the waves obey Him! 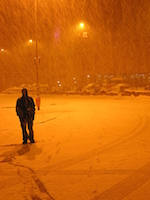 by Tim Archer (03/18/2015) | Hope for Life
It's easy today to feel like humans are pretty powerful. Given enough money and enough time, and it seems like we can do just about anything. We can build that bridge. We can cure that disease. We can invent that machine.

Then some snow falls, and we realize that there are forces much stronger than we are. Or a hurricane blows through. Or a volcano erupts. Suddenly we don't seem as powerful as we did before.

When Jesus lived on this earth, he did a lot of signs and miracles. One of the most amazing was witnessed by only a small group of Jesus' followers. Jesus was in the region of Galilee, near the large freshwater lake called Kinneret, the one sometimes called "the Sea of Galilee."

He and his disciples decided to cross the lake. As they were doing so, a terrible storm developed. The gospel of Mark tells the story:

A furious squall came up, and the waves broke over the boat, so that it was nearly swamped. Jesus was in the stern, sleeping on a cushion. The disciples woke him and said to him, "Teacher, don't you care if we drown?" He got up, rebuked the wind and said to the waves, "Quiet! Be still!" Then the wind died down and it was completely calm. He said to his disciples, "Why are you so afraid? Do you still have no faith?" They were terrified and asked each other, "Who is this? Even the wind and the waves obey him!" (Mark 4:37-41).

Who is this that even the wind and the waves obey him? It would become obvious to them later on: this was Jesus, the Messiah. This was God made flesh.

Here's a suggestion: the next time you see a wonder of nature, don't just wonder at nature. Wonder at the One who created it all. The One with the power to stop wind and waves with just a word.

The next time you see a wonder of nature, don't just wonder at nature. Wonder at the One who created it all.
Want to know more about Jesus? Download the Bible study "Discovering Jesus". By learning about Jesus, you'll learn about his Father as well.

"Discovering Jesus" can be found on the HopeForLife.org website. Look for the link at the bottom of the first page.

"The One with the Power " by Tim Archer is licensed under a Creative Commons License. Heartlight encourages you to share this material with others in church bulletins, personal emails, and other non-commercial uses. Please see our Usage Guidelines for more information.