So are you superstitious, or only a little stitious? 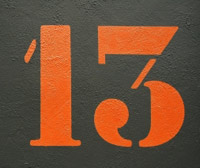 When I was assigned a seat on Row 13 on a plane a while back, somebody asked if I didn't want to ask to be reassigned. I told him I was pretty sure that a plane crash was no more likely for Row 13 than for, say, Row 27! I honestly don't think he got it. Mmmmm.

There will be lots of terrible things to happen in A.D. 2013. Wars will rage, Washington politicians will continue to mess up the country and infuriate you, and a struggling economy will have some dead spots still. One of those dead spots may affect your company, and you might lose your job. Speaking of "dead" spots, some famous people will die this year — along with young husbands, beloved siblings, best friends, and perhaps me. You will have days and events this year you will wish hadn't happened. You may be tempted to blame it on '13.

But there will be lots of wonderful things to happen in A.D. 2013, too. A war somewhere will end, Washington politicians will do something you like (note: no assurances on this one, just a guess!), and some sectors of the economy will flourish. One of those bright spots may involve your company, and you could get a raise or promotion. Speaking of "bright" spots, some shiny new faces will come on the scene in entertainment, athletics, or politics — perhaps someone you know, a family member, or even you. You will have some days and events this year you will wish you could repeat infinitely. Before 2013 ends, you may have such good fortune that you will tell someone that '13 was anything but unlucky.

In other words, this year is going to be remarkably similar to 2012 or 2014. It will be a mixed bag of highs and lows, positive things and terrible things, good and evil. All of us can certainly pray for more of the former than the latter. Please, no more Newtowns or mall shootings or Amber Alerts. But all of us know better than to think we won't have such things to chronicle on December 31, 2013.

I'm trying to be both realistic and reasonably positive.
One of the earliest shared prayers of Christians was Maranatha! It is an Aramaic word that means "Come, O Lord!" They knew the world would never work as it was meant to until Jesus returned. Unlike modern Americans, they never believed they could solve all their problems and create universal bliss.

For 2013, I'm trying to be both realistic and reasonably positive. I will be neither naïve nor pessimistic. Until Jesus comes, I will pray for patience and faith, courage and persistence. I will pray to love God and others more.

"Will this be 'Lucky 13'?" by Rubel Shelly is licensed under a Creative Commons License. Heartlight encourages you to share this material with others in church bulletins, personal emails, and other non-commercial uses. Please see our Usage Guidelines for more information.