How much time are you willing to invest in the life of a child? 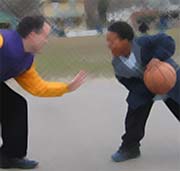 by John Cragg (12/10/2006) | Leading in Hope
If you have listened to Christian radio over the last several months, you have heard a great deal about children who have been orphaned. There are more than 143 million children without parents in this world. As a matter of fact, more children were orphaned in 2003 than the total number of people living in New York City. The numbers are staggering, but we cannot miss the point simply because we find the numbers overwhelming and hard to personally comprehend.

Religion that is pure and undefiled before God, the Father, is this: to care for orphans and widows in their distress, and to keep oneself unstained by the world (James 1:27 NRS).

God clearly calls us to action in caring for those without families. There are many ways we can respond obediently. Some are adopting orphaned children. Many others of us in the Body have circumstances in our lives that rule this vital ministry out at the current time. While there are often waiting lists to adopt babies, many older children can wait for years and still may never find an adoptive family. I'd like to share how more of us can answer our Lord's very clear call. It is called mentoring.

The orphans in the United States are often called "children in foster care." Kids in foster care have usually also experienced things that we would never want anyone, let alone children to endure. Whether by death, abandonment, or addiction, they have lost the adults that God placed into their lives to protect them and raise them up in the way that they should go.

While there are many dedicated and loving foster parents, many of these foster children have been moved from home to home. They often miss out on the consistencies that come with the love of a healthy and stable family. If a child "acts out," he or she may be threatened or actually moved from the home, quite possibly moved even into more difficult circumstances. Because these kids have been moved so much, they have likely experienced discipline outside the context of a loving relationship. As Dr. Dobson has frequently taught, discipline outside of relationship leads to rebellion. How can we redefine discipline for a child who has only experienced it in ways that it can only be understood as destructive rather than lovingly instructive?

These children long for and need consistency just like every other child. When an adult finally provides consistency in the form of necessary discipline, it can be mistaken for a lack of love. A mentor does not have the role of disciplinarian. The mentor is there to explain the new foster mom or dad's behavior in a way the child can understand. Hopefully the mentor can help clarify what the foster child sees as negative discipline as a powerful expression of love within a family. The mentor is often a friend who is a translator of the language of family love.

Eugene (not his real name) was a foster kid who came to live with my family when he and I were both 12. I was not what I would usually consider a mentor because of our age similarity. For some reason, however, I played that role in his life from the first week her arrived at our home.

The third day he was with us, the weekly chores changed like they always did on Saturday. Eugene randomly drew the job of taking out the garbage. He informed everyone that he was no garbage man. My father sent him to his room, saying he needed to stay there until he was willing to take it out. He was there for hours before I went in and sat down next to him.

I was a friend who did not have to discipline, so, I was in a unique position to translate the family language of love to this orphaned child. Sometimes fatherless, and or motherless kids need translators because their life experiences have given them expectations and models that do not lead them to acceptable behavior. A mentor can be a valuable asset in helping a family transition a child from survival-mode to more normal family life. A mentor can help the child find a different perspective on things that happen. A Christian mentor can also be another adult through whom an orphan experiences the love of his or her heavenly Father.

Betty Lynn (not her real name) was in sixth grade and was a sweet and polite little girl to everyone, except to her adoptive mom. Everyone wondered why this beautiful little girl was so hard on her adoptive mom until it came out with a mentor. "All the other adopted kids I know were adopted as infants. Why did mom leave me in the orphanage until I was six?"

From this precious young girl's limited perspective, she was left six years longer than a loving mom should have allowed her to suffer without parents and was "acting out" toward her adoptive mom. This may not be a logical conclusion to us, but a child's perspective is based on very limited life experience and this experience has often been laced with trauma. She needed a mentor to both identify her hurt and help her deal with it and find her place in her loving adoptive family.

A mentor is not taking the huge responsibility of bringing a child into his or her home. It just takes two hours a week. Yet a mentor can be used by God to introduce a post-adoptive child to some of the truths of his new family's language of love. A mentor can also be used by God to help a foster child adapt to a new foster family while exposing him to the love of his heavenly Father.

Mentoring is a way that Christians can actively care for orphaned children as God would want us to do. This is God's heart. This is Scripture's frequent command. Let's do it together. If you would like to find out more about mentoring children who have faced many of life's awful challenges alone, please check out the following website, http://LIYouthMentoring.com.

"Two Hours a Week" by John Cragg is licensed under a Creative Commons License. Heartlight encourages you to share this material with others in church bulletins, personal emails, and other non-commercial uses. Please see our Usage Guidelines for more information.