Can being respectful really save lives? 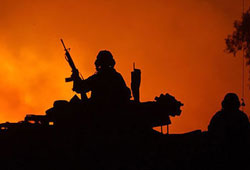 Now, who will want to harm you if you are eager to do good? But even if you suffer for doing what is right, God will reward you for it. So don't be afraid and don't worry. Instead, you must worship Christ as Lord of your life. And if you are asked about your Christian hope, always be ready to explain it. But you must do this in a gentle and respectful way. (1 Peter 3:13-16)

A recent front-page story in the Wall Street Journal (January 6, 2004) reported something that every big corporation, small business, and convenience store should consider. Come to think about it, schools, churches, and families need it too. Just in case you missed the report in question, here's a summary.

U.S. Marines being trained for duty in Iraq are getting drilled in people skills as well as heavy weaponry, receiving instruction about staying respectful as well as about staying alive. The maxim Marine commanders have adopted is the one most of us know from the Hippocratic Oath: "First do no harm."

Yes, Marines are taught to fight. They carry deadly weapons — and know how to use them. And the thought behind the new training protocols is not to put them at undue risk but to take a long view of defusing hostility borne of suspicion. In essence, as the article said, the Marines have undertaken a "deprogramming campaign" that teaches skilled fighters to ask questions first and shoot later.

Yes, there is great risk to such a strategy. An enemy certainly can exploit it for his purposes. Marines still will have to be alert to defend themselves, but they are being asked to believe that people in Iraq "can still be won over if American troops treat them with more dignity, patience and understanding."

So they will sometimes pull back instead of fighting, if they think civilians will be endangered or alienated. They are even being taught to take off their dark sunglasses when interacting with Iraqis, so as not to appear quite so intimidating and inaccessible. They are being taught about Iraqi culture and forbidden to use disparaging names for that country's people.

Maybe people who answer phones, work counters, and handle payments should be trained not only in the details of their products but about the basic need people have to be treated with respect. Perhaps a teacher or parent occasionally needs to let something pass rather than making a test of wills out of everything.

"Always Respectful" by Rubel Shelly is licensed under a Creative Commons License. Heartlight encourages you to share this material with others in church bulletins, personal emails, and other non-commercial uses. Please see our Usage Guidelines for more information.