What? I haven't done anything wrong...! 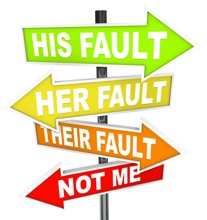 Easing through the right hand turn lane, I merged into traffic with the significant while accelerating quickly because circumstances made it necessary. While we don't have much of a rush hour, this was the busiest street in town at the busiest time of day. Suddenly, all the cars started stacking up in front of me as drivers looked for places to bail out of their lane. More traffic was bearing down on us from behind since that light had just changed. The left lane of traffic going the same direction I was going had totally stopped. The cars in front of me alternated between tapping brakes and hitting the gas to get around a problem.

The problem? In the left lane, a woman had stopped in the middle of traffic. Her right turn signal was blinking. Apparently she was hoping to turn right across the inside lane of traffic. As each car scooted past her, she was screaming, had an angry look on her face, and was giving everyone the unkind finger salute.

She was obviously blaming everyone else for the mess she was in and the danger she was causing. The problem in her mind was everyone else, not her. It apparently didn't matter to her that she had illegally stopped in the middle of the road in busy traffic in an attempt to turn right from the left hand lane. Everyone else was to blame, even though many drivers could not see her blinker and had traffic bearing down upon them at a rapid rate of speed. 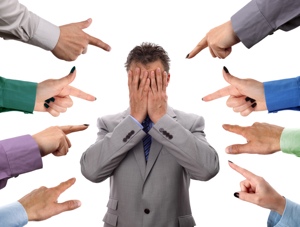 Yes, with a little more warning and a little less traffic, I would have tried to let her in to turn right. That simply was not an option at that time of day on this one road.

Yes, I have been driving in unfamiliar places and had to make sudden lane changes because my GPS was going, "Recalculating!" or the road signs were confusing.

In this instance, however, the person didn't appear to be from out of town and she was screaming at everyone else for the dangerous mess she had caused.

In a world where political correctness doesn't allow us to say anyone is wrong, blame gets passed around quite freely. "It's not my fault..." is the standard line. I can choose any number of reasons to blame someone else rather than taking responsibility for my own messes:

There are as many reasons to blame someone else, or something else, as there are people like me — flawed people — who sometimes fail. There are people who makes mistakes and stumble in ways they never dreamed they would, and people who are sometimes rebellious and sin willfully only to regret it later.

The blame game has been going on as long as there have been people. When God confronted Adam and Eve when they were hiding because of their guilt, Adam blamed Eve and Eve blamed the serpent:

When the cool evening breezes were blowing, the man and his wife heard the LORD God walking about in the garden. So they hid from the LORD God among the trees. Then the LORD God called to the man, "Where are you?"

He replied, "I heard you walking in the garden, so I hid. I was afraid because I was naked."

"Who told you that you were naked?" the LORD God asked. "Have you eaten from the tree whose fruit I commanded you not to eat?"

The man replied, "It was the woman you gave me who gave me the fruit, and I ate it."

Then the LORD God asked the woman, "What have you done?"

While God wants to liberate us from shame, there are times when we must accept our guilt because we are guilty.
"The serpent deceived me," she replied. "That's why I ate it."

The bottom line was that they had doubted the goodness of God. They let the serpent persuade them that God could not be trusted. So they rebelled and disobeyed the One Whom had blessed them with everything good, precious, and life-giving. Then the blame game began. The ultimate implication behind the blame game was that it was God's fault for giving Adam the woman and for allowing the serpent to talk to Eve.

While God wants to liberate us from shame, there are times when we must accept our guilt because we are guilty. Guilt isn't forgiven and restoration does not happen until confession of guilt occurs and forgiveness is demonstrated. We live in a world where everyone is supposed to get a participation ribbon regardless of performance. We live in a time when many teachers can no longer use red ink to mark incorrect answers for fear of damaging young students' psyches. We find ourselves in a culture where the only sin is to say that something someone said or did is morally wrong. 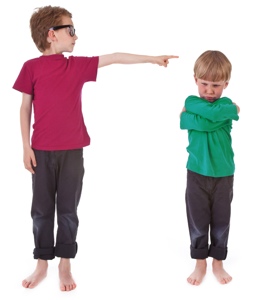 In the process of avoiding our own guilt, we have programmed ourselves to blame someone else... because we are never guilty — even if we are in the wrong lane, illegally stopped, trying to make an illegal turn, endangering traffic, gesturing crudely, and cursing and blaming everyone else for the mess we've caused.

Jesus' time with Peter and his other closest disciples on the beach after the Lord was raised from the dead reminds us of the importance of dealing with our failure and sin. Jesus confronted Peter lovingly, but clearly made him face up to his failures before restoring Peter to leadership and service (John 21:1-19). Nathan the prophet did David a great service by confronting David with his sins of adultery and murder (1 Samuel 12:1-13). David responded with his wonderful psalm of contrition that believers have used through ages to confess their sin to God (Psalm 51:1-17). He faced his guilt, asked for forgiveness, and God used David for years to come.

So rather than the blame game and hiding our sin in shame, let's do what Jesus' half-brother, James, wrote:

Confess your sins to each other and pray for each other so that you may be healed (James 5:16 NLT).

"Blame Game" by Phil Ware is licensed under a Creative Commons License. Heartlight encourages you to share this material with others in church bulletins, personal emails, and other non-commercial uses. Please see our Usage Guidelines for more information.