So what's so bad about being

She opens her mouth with wisdom, and the teaching of kindness is on her tongue (Proverbs 31:26)

I'll never forget this extremely cool guy I was into when I was nineteen and stationed in Germany. What's-His-Name (I can't actually remember his name) was a biker and weightlifter. I met him at the gym where he ruled. After sufficient adoration directed from me to him, he asked me on a date — a ride to a nightclub where bikers gathered.

He didn't have much to say, and he spent more time looking at the mirrors lining the back wall than he did at me, but I was shallow enough to still have a fantastic time.

I was witty and charming — a legend in my own mind.

Surely, he too, was having a fantastic time.

Apparently, he was not. After our date, an awkward dodging period ensued in the gym among barbells — until it became embarrassing and I opted for the running club. A few months later, I spotted him at the commissary in the bakery section. I went in for the "Hello, what happened?" — and, "What did I do wrong????"

Not the best move, but I was only nineteen.

He equivocated for a minute or two, hamburger buns in hand, before he came out with it — I was too nice for him.

Oh, great. Drive spikes into my coffin and call me dead.

Nice was guy code for uninteresting and boring. The far opposite of sexy. Like any girl with a shred of pride (not), I tried to convince him I wasn't really nice, but that turned him into the most uncomfortable-weightlifting-biker you'd ever want to see. I felt bad and tried to beef him up again.

Which made his declaration hurt that much more.

It took a couple of years to come to terms with my "niceness" — not that I embraced it, merely accepted it.

And then two things happened.

The first was that I began to feel a genuine "kindred-ness" with others.

Kindred and kind both come from kin. When we talk about kindred spirits, we are talking about qualities we share that go beyond earthly ties — though technically kin are the people we are connected to by blood.

Kindness is born of love. Connection.

It connotes respect for all human beings — including self, though it is selfless. Another great paradox.

Nice is more about pleasing others — telling them what they want to hear in order to receive validation. It's about making others beholden to us. Nice people seek approval. They give in the hopes that they will get back. And when they don't get back, they become resentful.

That guy (whose name I can't remember) had been right. I was too nice.

Kindness is breathtakingly beautiful.
Life was the second thing that happened.

I learned that even intrinsically kind people can have their buttons pushed and become unkind.

There's nothing more humbling than to hear yourself say horrible things to another human being or to watch yourself behave in a manner that goes against everything you say you believe.

You can also ask me.

I've seen what UN-kindness looks like on me — it's ugly.

And while I can live with boring and uninteresting, I don't want to live with ugly.

So I've prayed and hoped for less niceness and more kindness to make up who I am. 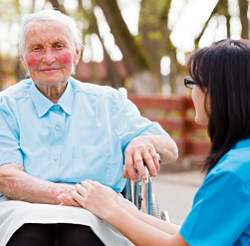 I've also become more appreciative for every kind molecule floating around these innards. I will never take kindness for granted or wish it away for something cooler, socially speaking.

First, because I am not cool.

And second, because kindness is breathtakingly beautiful.

And you don't have to take my word on this; this truth comes from a much higher authoirty!

"No More Miss Nice Girl!" by Lisa Mikitarian is licensed under a Creative Commons License. Heartlight encourages you to share this material with others in church bulletins, personal emails, and other non-commercial uses. Please see our Usage Guidelines for more information.