Are we the older brothers? 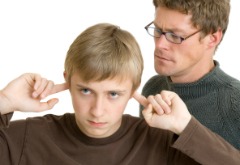 by Phil Ware (06/23/2011) | Two Minute Meditations
I recently learned that the song that received the most radio and TV play time in the twentieth century was the Righteous Brother's song, "You've Lost that Lovin' Feelin'" (See Wikipedia). It speaks to lost love and lost relationship between a man and a woman. Nearly all of us have had a friendship, a business partnership, a family relationship, or a love relationship that has lost its spark, and know the sad, depressing, melancholy that accompanies that realization we've "lost that lovin' feelin'"!

We try to put our finger on "What went wrong?" or "Where did the magic go?" or "What happened to us?" Most of the time, even though we have our hunches, we can't quite figure it out and simply chalk it up to another example of lost love and the mystery of relationships.

Many years ago, Jesus told a story about a man who had two sons (Luke 15:11-32). We often call this "The Parable of the Prodigal Son." Jesus story, however, is about two lost sons and one incredibly loving and redemptive father. And while the younger son gets most of the "air time" in our talking about the story, the older son is the tragic figure in the story and the focal point* of why Jesus told the story!

The younger son sets out to return to his father — and notice that he didn't return for the house, the feast, the money, the security, but that he returned to his father (Luke 15:18 and  Luke 15:20). This is the hardest lesson most of us have to learn: that God loves us, and what he requires of us is not to limit us or manipulate us or deprive us, but to protect and bless us.

Unfortunately, the older son never really understood this! If he ever had "that lovin' feelin'" for his dad, he lost it somewhere on the way to adulthood. Instead of a relationship with his father, he settles for a cold and burdensome sense of repressive responsibility. "Look! All these years I've been slaving for you and never disobeyed your orders." he tells his father (Luke 15:29 NIV). You can hear his resentment for living under this repressive sense of responsibility when he talks about his brother as, "this son of yours ..." (Luke 15:30).

In Jesus' story, the older brother represents the rigorously religious of Jesus' day (Luke 15:1-3). Their sense of burdensome obligation to God, and their sense of repressive religious responsibility to God and entitlement of good things from God, was the focus of Jesus' story. So here, Jesus is doing what the father in the parable had done: he had come to them, pleading with the "older brothers" in his audience to come in and enjoy the party of God's salvation and the blessings he longs to give them (Luke 15:28).

Jesus tells this story for them — and for those of us who are long-timers in this religious thing we do — so that all "older brothers," of every age, can know that they are loved as much as the "younger brothers." After all, the father left the party and humiliated himself to invite his older son to come — just like God emptied heaven of its greatest treasure, endured the rejection and humiliation of the cross, to invite us to come to his party of grace in our honor!

So often, we can get caught up in our activities, responsibilities, and obligations in "churchland" that we forget that the Kingdom of heaven is a gift of grace from our Father who loves us and has taken our shame and disgrace upon himself so we can have everything his grace has to offer — remember the father told the older son, "Everything I have is yours!" (Luke 15:31). The Father doesn't owe us because we've done good things, but we've been blessed to be in the presence of the Father who loves us and wants the best for us and longs to share the riches of his grace and his presence with us.

Jesus gently sings to them and to us, "You've lost that lovin' feelin'!"
Seven decades after Jesus told this story about "a man who had two sons," he sends a letter to the church of Ephesus through John. While Jesus says that the Father is pleased with their commitment to be faithful (Revelation 2:2-3), he rebukes them for becoming "older brothers"! They have lost the love they had at first (Revelation 2:4), and they had to change their attitudes and their actions, or he will no longer recognize them as his church (Revelation 2:5). They had lost sight of the hardest lesson to learn: that simply being in the Father's house, in the Father's presence, and sharing in the Father's bountiful grace, is worth far more than anything they demand or expect in return for their service to the Father.

As he told this famous story, Jesus looked at all the skeptical, critical, and condemning, "older-brother" faces around him, and with love and compassion, gently sings to them and to us, "You've lost that lovin' feelin' ... now it's gone, gone, gone ..." Only in Jesus' version of the song, the last verse is an invitation to come back home to the Father, to share in the party, to live in his grace, and to let that love turn our obligation and responsibility into a journey of grace, relationship, and joy — a party of grace!

* Ironically, most of the studies on the prodigal son focus upon the younger son; when in fact, Jesus tells the parable to answer the charge of the "older brothers" in Jesus audience (Luke 15:1-3). This is the third parable in a series of three parables. In the two previous parables, the lost item (sheep and coin) is found because there was a search made to reclaim it. In this last parable, the same search happens and it shows us who is lost and who is most on the heart of Jesus. It is not the younger son the father searches for, but the older one! Jesus tells this story to invite the "older brothers" to come join the party of God's joyous grace and realize that everything the Father has is theirs, and has been all along, if they had only realized the blessing of being in the Father's presence and not simply wanting what the Father could do for them!

"The Hardest Lesson Lost" by Phil Ware is licensed under a Creative Commons License. Heartlight encourages you to share this material with others in church bulletins, personal emails, and other non-commercial uses. Please see our Usage Guidelines for more information.