How can we follow in the same pattern doing the same ol' thing yet it appear on the surface as something very different? 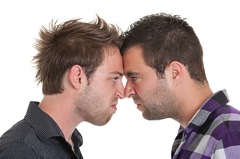 Jesus continued: "There was a man who had two sons. The younger one said to his father, 'Father, GIVE ME my share of the estate.' So he divided his property between them (Luke 15:11-12 NIV).

"The older brother became angry and refused to go in. So his father went out and pleaded with him. But he answered his father, 'Look! All these years I've been slaving for you and never disobeyed your orders. Yet you never GAVE ME even a ...'" (Luke 15:28-29 NIV).

Have you ever caught yourself using religious language to justify something you've done? Listen to your reasons for things underneath your words and you may surprise yourself. I know I have.

We can come up with all sorts of religious words and phrases to justify what is wrong, arrogant, sinful, petty, and self-righteous in ourselves while condemning it in others. In reality, our violation of God's will is the same thing as the unredeemed sinner's rebellion, only different ... because it's actually worse because we claim to know God and we use nice, "religious cloaking" terminology to make us feel more religiously correct about it!

There are many other religious sounding phrases we use to try to manipulate God or make ourselves feel better when we've strayed from God's will. But, maybe the one that most reveals our hearts is this one: "With all I've done to try to honor God, how could he let this happen to me?"

I'm not saying it's wrong to feel some of these and even voice them to God occasionally — Job, Jeremiah, and to a certain extent, Jesus voiced similar things to God. However, when they reveal our basic faith mindset we are in deep trouble. Why? Because we are the older brother in Jesus' story about "a father who had two sons" — often called the parable of the prodigal son (Luke 15:11-32). We use our supposed good behavior to mask our desire to get something out our Father because he owes it to us — go back and read the following words in context:

The older brother became angry and refused to go in. So his father went out and pleaded with him. But he answered his father, "Look! All these years I've been slaving for you and never disobeyed your orders. Yet you never gave me even a young goat so I could celebrate with my friends. But when this son of yours ..." (Luke 15:29-30).

Let's listen to Jesus' story with fresh ears and with our eyes wide open to some realities that we have often missed. When we do, we realize that the two sons wanted the same thing: they both wanted the father's stuff more than they wanted a relationship with the father! One was brazen in his approach to the issue, the other much more socially acceptable. However, notice in the two passages at the beginning of this post the words in all caps: "GIVE ME" and "GAVE ME" — same word, same goal, same idea, out of the mouths of both sons! Their father's stuff was worth more to them than their father.

Now let's ask ourselves an important, and for me, a convicting question. Isn't that often the way we approach God? What can he give me? What am I going to get out of this? What's the pay off for this Christian lifestyle I'm living? Listen to the way we pray — how much adoration and thanksgiving do you hear about who God is and what God has done that is not tied to physical, selfish blessings?

We must long to be close to God because he is good, not because we want to get good stuff from him.
Back in the 1960's Juan Carlos Ortiz warned evangelicals in America about our "carrot stick" Christianity — enticing people to honor God so he will give us good things, and eventually the greatest thing, for our efforts. Ortiz reminded us that we should follow Jesus because we know he is Lord. We worship God because he is God. Yes, he has done great things for us. Yes, he promises great things for us. But, the bottom line is very simple: God is worthy of our praise, adoration, and sacrifice because of WHO he is and not because of anything he is going to do for us. We honor God because he alone is worthy of our praise. If God chooses to bless us, that is grace. We are thankful for that grace, but we honor God first because he is God and then we thank him because he has also chosen to be gracious. Yet even if we don't see his graciousness, we honor God because our Father is God!

So much American religion that is passed off as Christianity is really a modern form of idolatry. We serve God for what we can get out of him. We don't "go to church," live ethically, love our neighbors as well as our enemies, do good deeds, deny ourselves certain sins, and a host of other things because we love God ... we actually do them to get God to do "good stuff" for us. It's our religious barter: we do this and God is supposed to do that.

In this way, we try to make God into an automatic slot machine or investment scheme: we do our part and he is obligated to give us what we expect and want. As harsh as it is to say, this kind of religion is thinly veiled greed — and greed is called idolatry (Colossians 3:5). We do what we do so God will do what we want from him and it pays off for us. And that, dear friend, is the essence of idolatry, just as much as erecting an image and bowing down to it. For at its heart, idolatry is about controlling the gods so the country will be protected, women's wombs are fertile, our harvests are good, and our economy is robust, and we prosper.

Some of that "good stuff" we ask for is genuinely good — wanting to enjoy "heaven" with God and live with him, and those who love him, forever. Some is understandable — wanting him to heal our sick loved ones and protect our family from harm. But let's listen underneath our prayers to what we are really saying in them — "help me," "give me," "fix this problem," "stop that situation," "make that person," ... rather than how the Lord taught and showed us to pray. "not what I will, but what you will" (Mark 14:36) or "your Kingdom come you will be done on earth as it is in heaven" (Matthew 6:10).

Jesus told the story about the "father who had two sons" so that we could see ourselves as the older brother and realize that God longs to bless us with everything — even when we don't understand what is happening (Luke 15:31). Yet for us to realize this blessing, we must first realize the blessing we have in our Father and long to be close to him because HE is good, not because we want to get good stuff from him. Or to put it in the language of the parable, because even the servants and hired hands in the Father's house have it better than the rich sons in rebellion far from home (Luke 15:17-20) and the even richer sons* who live at home and who never know the heart of the Father and all that the Father has done for them.

* Remember that the older son had already received a larger share of the inheritance than the younger son (Luke 15:12). For more information on this powerful parable, please see the previous articles in the series, The Journey Home:

"Same Thing, Only Different" by Phil Ware is licensed under a Creative Commons License. Heartlight encourages you to share this material with others in church bulletins, personal emails, and other non-commercial uses. Please see our Usage Guidelines for more information.