When these Ol' Walls Can't Speak

Can you capture the memories even if you can't hear the words? 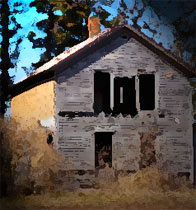 by Phil Ware (06/03/2011) | Two Minute Meditations
I've gone back a few times to look at the house where our kids did a lot of their growing up. However, I haven't gone by much lately, even though we've been back to the city a number of times. The house doesn't really speak to me.

The last time I went by the house was nearly twenty years after we had moved. The same basketball goal was up on the garage. The house had the same color and trim. The same trees grew in the yard, they were just bigger. Going by, I had a flash or two of memories, but the experience felt weird, even empty. The house looked the same, but it wasn't OUR house ... and it for sure wasn't our home!

A long time ago Amy Grant sang the song "If These Walls Could Speak." The song, with both its melody and words, is wistful and powerful and, for me, is deeply moving.

Yet as I looked at that old house, I didn't wonder if those walls could speak. I knew they were silent. Ah, but the memories in my head and my heart that happened in and around that house can speak! The memories of the ones I love who made that house a home still speak ... even when we are apart! That is what home means: not a place, not a building or walls or window panes or doorways, but my precious wife and incredible kids. That's where my home is until we all end up at the table of joy in the presence of our Father, sharing in the great celebration of grace in that home without tears and partings.

There is a deep longing in each of us. There is an ache to find home, to experience that sense of settling down into family, to go to that illusive place some know, many have missed, and a place for which we all have a deep longing. Augustine said it well centuries ago: "Our hearts are restless until they rest in You." Our longing for home is really a longing for God, a longing for the Father.

We are on the long journey home and we all need to know that there is a real, loving, strong — but tender — Father wanting to welcome us there! Despite Hollywood wanting to write good fathers out of every script, despite the failure of many fathers, despite the imperfection of every father no matter how well-intentioned, and even for those of us with great fathers, there is a yearning for God to show up and fill in the Father hole in our hearts and welcome us to our real home.

I know some have horrible images of their fathers. Some are fathers with horrible guilt about wasted time. Some are angry because their fatherhood has been devalued. Yet I have found an incredible truth now that I am older: I can be a blessing by simply loving folks in a fatherly way and pointing them to the True Father — the one Father without the inconsistencies, the selfish moments, the broken places, that all of us who want to be good fathers invariably have.

So let God redefine what it means to be a father. Let Father God fill that space in your heart. That doesn't diminish the importance of your mother, your wife, your daughter, or yourself, because we are all — male and female — made in God's image (Genesis 1:26-27). But, for many who think they long for home, for something more that they can't seem to find, for something better than what they have now, let this old story speak and let this Father redefine what true fatherhood means ... for the walls can't speak and no house can be a lasting home, no matter how badly we want it to be so!

(See free images below the following story of Jesus.)

Jesus continued: "There was a man who had two sons. The younger one said to his father, 'Father, give me my share of the estate.' So he divided his property between them. "Not long after that, the younger son got together all he had, set off for a distant country and there squandered his wealth in wild living. After he had spent everything, there was a severe famine in that whole country, and he began to be in need. So he went and hired himself out to a citizen of that country, who sent him to his fields to feed pigs. He longed to fill his stomach with the pods that the pigs were eating, but no one gave him anything. "When he came to his senses, he said, 'How many of my father's hired servants have food to spare, and here I am starving to death! I will set out and go back to my father and say to him: Father, I have sinned against heaven and against you. I am no longer worthy to be called your son; make me like one of your hired servants.' So he got up and went to his father.

"But while he was still a long way off, his father saw him and was filled with compassion for him; he ran to his son, threw his arms around him and kissed him. "The son said to him, 'Father, I have sinned against heaven and against you. I am no longer worthy to be called your son.'"But the father said to his servants, 'Quick! Bring the best robe and put it on him. Put a ring on his finger and sandals on his feet. Bring the fattened calf and kill it. Let's have a feast and celebrate. For this son of mine was dead and is alive again; he was lost and is found.' So they began to celebrate. "Meanwhile, the older son was in the field. When he came near the house, he heard music and dancing. So he called one of the servants and asked him what was going on. 'Your brother has come,' he replied, 'and your father has killed the fattened calf because he has him back safe and sound.'"The older brother became angry and refused to go in. So his father went out and pleaded with him. But he answered his father, 'Look! All these years I've been slaving for you and never disobeyed your orders. Yet you never gave me even a young goat so I could celebrate with my friends. But when this son of yours who has squandered your property with prostitutes comes home, you kill the fattened calf for him!' "'My son,' the father said, 'you are always with me, and everything I have is yours. But we had to celebrate and be glad, because this brother of yours was dead and is alive again; he was lost and is found'"

Let Father God fill that space in your heart.

Many Rooms in My Father's House — http://hlt.me/j9gO5Z

Light for the Journey — http://hlt.me/ioFpG2

"When these Ol' Walls Can't Speak" by Phil Ware is licensed under a Creative Commons License. Heartlight encourages you to share this material with others in church bulletins, personal emails, and other non-commercial uses. Please see our Usage Guidelines for more information.