Why is it so hard to learn this simple lesson on which so much of life hangs? 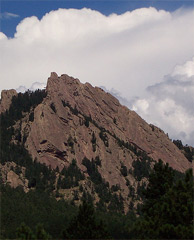 by Phil Ware (06/16/2014) | Two Minute Meditations
Isn't it amazing how quickly we can lose our way when we are on our own and think we are following the right path for ourselves? Years ago, my father was in the Denver Asthma Clinic and my mom and brothers went to see him. After a hard week at the hospital, some friends took them to a get-away for the weekend in the flat iron mountain range. Early the next morning, my brothers went out to climb the backside of the mountains, promising to follow a well-marked trail.

My brothers thought that they were on safe footing. They realized later that taking the hike by themselves, without a map or guide, was foolish. The results were nearly catastrophic during an already incredibly stressful time in our family's life. Now this makes for a good story about boys being boys. Yet without the grace of God, a strong vine, a "convenient ledge," and a mountain rescue squad, the story would have been the heartbreaking death of my brothers during the time my dad was beginning his slow descent into incredible health troubles.

Jesus tells the story of a son who thought he knew best how to seize the gusto out of life (Luke 15:11-24). This son shames his father — telling him he is just as good as dead to him — and demands his inheritance so he can follow the path he thinks is best. Off he goes, blowing his fortune, ruining his life, and finding himself in despicable circumstances, with little hope for the future. Then this headstrong, self-willed son comes to an important realization: it's better to be a hired hand in my father's house than to be on my own and away from my father.

Jesus' point is clear. While Satan will do everything he can to make us believe what God asks of us is unfair, capricious, mean, demanding, limiting, joy killing, and ridiculous, what God asks of us is for our blessing and protection. It is better to be a servant in our Father's family than to be on our own and away from the Father.

This realization is the hardest lesson learned. Many of us have to learn it the hard way — wasting our influence, our lives, and our time on the pursuit of stuff that does not matter, or worse, contribute to our own destruction and the destruction of others.

The glorious truth about this hardest lesson learned is this: we have a Father who will take us back, bring us home, love us back to health, restore us with his grace as his beloved children, and give us important work to do for his kingdom (Ephesians 2:1-10). Our Father longs to show us that it is better to be a servant in his house than to be on our own and living it up without him. The only difference, and the powerful point of our story, is that once we come to our senses and really get this hardest lesson learned, God doesn't make us hired hands, he brings us home as his beloved children.

For a powerful telling of this story, watch this video presentation by the Skit Guys!

Many of us have to learn it the hard way!

You can find the video at Worship House Media: http://hlt.me/kNn1Q9

"The Hardest Lesson Learned" by Phil Ware is licensed under a Creative Commons License. Heartlight encourages you to share this material with others in church bulletins, personal emails, and other non-commercial uses. Please see our Usage Guidelines for more information.