What do we need to get us to stretch out a bit? 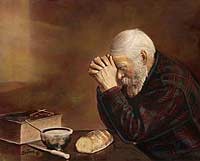 by Rick Brown (02/06/2011) | Special Features
The picture has had a long journey.* It began in 1918 when a bearded, saintly old man selling foot scrapers walked into Eric Enstrom's photography studio in Bovey, Minnesota.

Enstrom was preparing a portfolio of pictures to take to a convention of the Minnesota Photographer's Association. When he saw Charles Wilden he knew there was something special about his face. It was kind and absent of harsh lines.

He asked Wilden to stay for a meal. Enstrom prepared a table, placing on it a family Bible, some spectacles, a bowl of gruel, a loaf of bread and a knife. Then he asked Wilden to pose in prayer.

The picture was made during a difficult time. The war had left many with hardship and yet Enstrom wanted to remind people they had much to be thankful for and remind them of prayer.

This picture, entitled "Grace," hangs in hundreds of homes and churches and restaurants across America. And it hung in Laura's house, too.

It came to her house when her father moved into the guest apartment so that his daughter could help take care of him in his failing health. When he died, the picture remained in the house as a reminder to be thankful and to pray.

The early church didn't need a reminder to pray. They had to. Stephen got stoned. James lost his head. And now Peter was thrown in prison (Acts 12:1-17). King Herod had "stretched out" his hands to do evil to the church (Acts 12:1).

What can the church do? They are up against a King. One of their leaders is guarded by sixteen soldiers. They have no clout. No connections. Save one. So "the church prayed very earnestly for him" (Acts 12:5 NLT).

The word translated "earnestly" can mean to "stretch out" (http://bit.ly/HLh38CI5) The church offers up "stretched out" prayers. They respond differently than the powers that be. They didn't reach with arms outstretched with swords or in brute strength. Wired into their hard drive was this program: Pray first.

The church then was committed. The church today is comfortable. We think it is a big commitment to pray, to read the Scriptures, and to attend church. But the early church? They gathered with gusto. They prayed with passion. And an angel showed up and helped their leader escape.

We think these stories are strange. But maybe we are strange. Maybe what we read about Peter and the early church is normal for most of our history as Jesus' people. As a preacher once said, "Our experience is so subnormal that if normal ever showed up we'd think it was abnormal."

It struck me that we think it's a big deal to get up on a Sunday morning and give God an hour and a half of our time. Imagine reading our story in the Bible and seeing the following in print:

I doubt very seriously that you'd be very impressed with that, would you? Because within the pages of the Bible it is just normal for the faith community to gather and be about the things of God. The very first community of believers was described this way:

To remind us to pray first ... pray last!

They devoted themselves to the apostles' teaching and to fellowship, to the breaking of bread and to prayer (Acts 2:42 TNIV).

They prayed first. And they understood to pray last also. These were not "one-shot" prayers. No, they "stretched" them out — fervently, earnestly the translations say. They were persistent in their cries to God. And because they forsook comfort for commitment, God did great things through them. God was with them.

I believe he was there with Laura** even in the horrible tragedy that took place at her house. The house burned in a great fire. Somehow none of the neighboring houses were harmed. The remains looked like something from a war zone.

And yet in the rubble, one thing was found intact as if untouched by the fire or smoke. It was a picture of an old man sitting at a simple table with his head bowed in prayer.

* For more on this picture's history and how to get a copy, check out the "Grace" website (http://bit.ly/HLhxNNAJ)** This tragic story is true, but Laura is not her real name.

"Committed or Comfortable?" by Rick Brown is licensed under a Creative Commons License. Heartlight encourages you to share this material with others in church bulletins, personal emails, and other non-commercial uses. Please see our Usage Guidelines for more information.