Could Anything Else Be More Bizarre?

How does this happen? 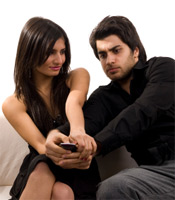 by Rubel Shelly (07/05/2010) | Leading in Hope
Once in a while something happens that is so far beyond the norm that there is nothing to do but drop your jaw. Well, you've been warned. Better put a pillow beneath your jaw to prevent a broken sternum — or worse.

You may be aware that the FIFA World Cup is under way in South Africa. Although soccer is gaining popularity in the United States, it is nothing like as big a sport here as in the rest of the world. It certainly generates more passion on other continents than the NBA Finals or baseball's World Series produces. The media-generated mania over the Super Bowl is our only near parallel.

Police have reported the arrest of three persons in South Africa over a dispute that led to murder over a match played June 14. A 61-year-old man named David Makoeya wanted to watch Germany play Australia. His wife, 36-year-old son, and 23-year-old daughter had their hearts set on another program.

"No," the man said, "I want to watch soccer." An argument started that escalated into a brawl. As best police can tell, family members slammed his head against the wall with enough force that he suffered a fatal injury.

What was so compelling that the man's family wanted to see? What alternate program was so important that it was worth fisticuffs? Murder?

They wanted to watch a "gospel program" says the police report! Folks, you just can't make up reports such as that. Nobody in his right mind could imagine it. For the sake of wanting to watch a television program about the Prince of Peace and the gospel of grace, three people commit murder.

Won't that make a strange defense at trial? "I love the message of Jesus so much that I had to kill someone who interfered with my plan to hear it on TV."

Before dismissing this as a wacky and off-the-wall episode from the other side of the world, what about the deacon who leads a pious Sunday prayer and curses like the proverbial sailor after a bad golf shot Wednesday afternoon? The Sunday School teacher who is having an affair? The pastor who is abusing his wife and children or mishandling church funds?

For that matter, forget clergy and church leaders. What of any Christian who plays fast and loose with truth-telling? Tells off-color and racist jokes? Doesn't keep promises? Is selfish and uncaring? Breaks confidence?

Won't that make a strange defense at trial?

It's still a good question to ask, don't you think?

"Could Anything Else Be More Bizarre?" by Rubel Shelly is licensed under a Creative Commons License. Heartlight encourages you to share this material with others in church bulletins, personal emails, and other non-commercial uses. Please see our Usage Guidelines for more information.