The Awful Shame of Shame

When guilt is right and why shame can be destructive! 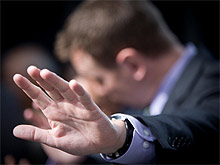 by Rubel Shelly (05/04/2010) | Leading in Hope
Guilt is a good thing. If I tell a lie, take something that isn't mine, or treat someone unfairly, I may feel awful about it. Lie awake that night. Feel sheepish the next time I meet him. As a matter of fact, the terrible thing would be for me to do something awful to another person and not have some pained reaction.

The child who can pour gasoline on an animal or the adult who can participate in a rape and laugh about it has limited chances for salvaging his humanity. If there is no remorse for causing needless pain to another person, something is terribly defective about that person's conscience. And it doesn't take too many repetitions of evil without remorse for a person to numb a conscience. His heart is cold. She cannot be bothered with embarrassment.

Guilt, then, is a good thing. It is like the engine light that flashes to warn you that something needs attention. You damaged a relationship. You broke a law. You did something against an intuitive or learned value. If you don't respond to it, things start to break down. If you do respond, you reclaim your humanity.

Shame, though, is a very different thing. It is a self-judgment that no longer sees a lie, a marital infidelity, or a criminal act as a sinful behavior but wears it now as an identity. It can't be dealt with in terms of what you did; you drag it around with you to let it be who you are. Don't you see the difference?

Guilt is able to say "I made a mistake" and set about to put it right. So you give back what you took. You correct the falsehood. You own the deed and take the consequences. With everything brought into the light, you name it for the bad thing it was, apologize for the pain it caused, and ask to be forgiven.

Shame has no distance between the person (made in God's own image!) and the thing he or she did (that violates God's will and human trust). It can only say "I am a mistake" and deny, blame, and lie. He denies either doing a bad thing or that the thing he did isn't bad at all. She blames what she did on someone else and takes no ownership of the harm generated. He lies to hide his secret shame.

Shame is far worse than guilt, too, in that people embrace it not only for the things they do, but also for things done to them. Many a victim of rape, for example, isn't able to get as angry with the person who violated her as at herself for being duped or careless or vulnerable. What happened to her becomes her identity ("I am dirty!) and generates self-destructive behaviors to validate that (false) self-image.

Shame is far worse than guilt!
Know why Alcoholics Anonymous works? It requires a "searching moral inventory" and appeals for disclosure, honesty, and transparency — in a safe and confidential place where there is no judgment or betrayal. If the church had not lost its way to become so critical and unsafe, A.A. would never have existed.

Confess your sins to each other and pray for each other so that you may be healed. The earnest prayer of a righteous person has great power and produces wonderful results (James 5:16 NLT).

"The Awful Shame of Shame" by Rubel Shelly is licensed under a Creative Commons License. Heartlight encourages you to share this material with others in church bulletins, personal emails, and other non-commercial uses. Please see our Usage Guidelines for more information.