How can the younger brother of Jesus help us find our way to hope? 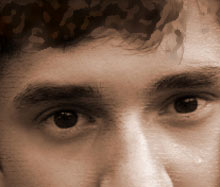 by Phil Ware (04/12/2009) | Two Minute Meditations
Editor's Note: Jesus was born into a real family. In putting the pieces of Scripture together, this is something like what it must have been like for them, especially for Jesus' (half) brother, James. If we allow their experience to be a part of our story, Jesus' resurrection can be so much more than just a holiday once a year.

Near the cross of Jesus stood his mother, his mother's sister, Mary the wife of Clopas, and Mary Magdalene. When Jesus saw his mother there, and the disciple whom he loved standing nearby, he said to her, "Woman, here is your son," and to the disciple, "Here is your mother." From that time on, this disciple took her into his home (John 19:25-27 TNIV).

James, like most good Jews of his day, was angry at Rome's brutal rule. He was even angrier at the treasonous partnership of the priestly class and the Sadducees with the Romans. Now they had tortured the life out of his own brother on the cross that stood before him!

James wasn't sure if his abandonment of Jeshua during the ordeal of Golgotha was out of anger or anguish. Maybe it was some of both. But now, as he stood on top of Skull Hill, tears streamed down his cheeks. He knew without having seen it happen, that what they had done to his older brother had been unspeakable. In the shadow of this Roman torture tree, this hideous means of making subjugated people cower in fear, James' emotions surged out of control.

James felt deeply wounded by his older brother. In death, his brother, the One others called Mashiach (Messiah) and Rabboni (Teacher), had said words that ripped through James' soul. "Woman, here is your son," and to the disciple, "Here is your mother."

"How dare Jeshua give the care of their mother to a Galilean fisherman and not to his own physical brothers?" Even in death, James couldn't help but feel that Jeshua's words tore at something deep inside him.

Over the last three years, James and his siblings felt that Jesus had embarrassed them. He had caused such a stir at their home synagogue in Nazareth that the crowd had rushed Jeshua and wanted to throw him off the high cliff just outside of town. James was never sure how his brother had escaped that mob, but the family knew they could never go back to synagogue there again (Luke 4:16-30).

And James could remember the words that had wounded all of them:

"Who is my mother, and who are my brothers?" Jeshua had asked. Then his brother pointed to his followers and said, "Here are my mother and my brothers. For whoever does the will of my Father in heaven is my brother and sister and mother" (Matthew 12:28-30).

O how those words had embarrassed and wounded them all.

Suddenly, as if the dam had burst, the confusing words of James' brother poured over him like a flood.

"Foxes have holes and birds have nests, but the Son of Man has no place to lay his head" (Luke 9:58).

"Sure he had a place to stay," James thought to himself, "he should have stayed with us in Nazareth! But he was determined to set out on some mission for God!"

"And why all of this language about families being divided over him? Hadn't he done enough in his own family to bring division?"

Neither James nor any of his brothers and sisters believed Jeshua was something special. They grew up with him. He was their older brother. So in a moment of irritation, they had all confronted him about his pretension of being someone great:

"Leave Galilee and go to Judea, so that your disciples there may see the works you do. No one who wants to become a public figure acts in secret. Since you are doing these things, show yourself to the world." For even his own brothers did not believe in him (John 7:3-5).

On another occasion, James and his brothers had broken through the crowd that wasn't letting Jeshua eat or sleep. They did it to rescue him, because they all thought he had gone over the edge emotionally.

Then Jesus entered a house, and again a crowd gathered, so that he and his disciples were not even able to eat. When his family heard about this, they went to take charge of him, for they said, "He is out of his mind" (Mark 3:20-21).

Simple! Clear! Powerful! Inspiring!
And now it ended here. At this Cross, with all of its pain and humiliation. "Such a waste!" is all James could muster himself to think at the time.

Thirty years later, and James was still in Jerusalem. However, everything was different. He was the most respected and best-known follower of Jeshua in Jerusalem (Galatians 2:9). Paul, on his last trip to the great city of Jewish faith, knew he had to connect with James (Acts 21:18). Paul had depended upon James years earlier when trying to secure the support to share the Gospel with Gentiles, and James had helped broker the deal (Acts 15:13). Even the famous apostle Peter had turned to James in times of crisis and hope (Acts 12:17). After all, James had been there in the upper room when the Spirit came, praying with the rest of the apostles (Acts 1:14). And later, when some Jewish churches were in trouble with their faith, it was James who wrote them to put them back on track. But far from resenting Jeshua's identity as Mashiach and Lord, James joyfully declared himself a servant of his brother:

Why was there such a dramatic change?

How did James go from a brother who ridiculed Jeshua (John 7:3-5) to one who saw himself as his brother's servant and who called his brother Lord and Christ?

Where did this transformation of his life happen?

Where did his passion, his influence, his hope, and his purpose arise?

Jeshua, the one we call Jesus, died and was buried. Life seemed over for everyone who knew him. No one would have been more crushed and more conflicted by the Lord's death than his own brothers and sisters. And no one is a better reminder that Jesus' resurrection is so much more than a bit of theological trivia or a holiday on the calendar. This event is the epicenter of life-change. It is hope reborn from all of life's ground zeroes. The resurrection is the center of power for family healing and liberation from all in life that holds us captive.

And if we choose to listen, the dashed hopes of a wounded brother turned passionate believer can become the manger for our lives made new and the empty tomb assuring our victorious future.

"James" by Phil Ware is licensed under a Creative Commons License. Heartlight encourages you to share this material with others in church bulletins, personal emails, and other non-commercial uses. Please see our Usage Guidelines for more information.