If it makes God mad, shouldn't we get angry, too? 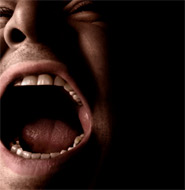 The fear of the Lord is hatred of evil. Pride and arrogance and the way of evil and perverted speech I hate (Proverbs 8:13 NRS).

When God sees someone abusing his wife, betraying her husband, corrupting a child, or otherwise perpetrating injustice, it makes him mad. Anger is the healthy response of a holy and moral God to the unholy and immoral deeds we perpetrate against one another.

Some theories of social justice and the spiritual life are modeled more on Aristotle's god — the "Unmoved Mover" — than the God we know in Jesus. When thousands are starving because of ethnic cleansing in Darfur, homeless because of recent flooding, or being aborted and abused, anyone who can be "unmoved" is worshiping Aristotle's impersonal god who is without feeling.

Anyone who knows the God revealed by Jesus of Nazareth has to feel something of God's outrage at the sight of innocent children suffering. He feels seething anger over the sordid things human beings do to one another. He should be enraged. Cry out for justice to be established.

"Give me 100 people who love God and hate sin," said John Wesley, who founded the Methodist Church, "and we will turn the world upside down for Christ!" Dr. Jack Arnold quoted that line from Wesley in the final sermon he preached in January 2005 — collapsing and dying in his pulpit as he moved to its conclusion — and said, "I think I could find 100 men and women who love Christ in America, but I am not sure I could find 100 men and women in America that hate sin." I have been haunted by that line since reading it. I fear he is correct.

God is passionate!
I fear we are so sophisticated and unmoved by evil that it doesn't make us angry. We'd rather do lists and observe rituals. We prefer to fight our church battles over whose doctrine is sounder than to follow Jesus into unpleasant places for the sake of caring about prisoners, prostitutes, and pushers.

Is there a parent reading this who would not be enraged at the person who seduced his daughter or hooked her son on cocaine? Is there anyone so cold and indifferent to the welfare of your own flesh and blood that you would be "unmoved" that your child has thrown away innocence? Made memories that will haunt and terrify for the rest of life? If you could receive such news with the calm of a statue, it is only because you have a heart of stone! God has a tender heart that is passionate for his sons and daughters.

If anyone has caused you to think that anger or getting mad is a wrong-headed thing for Christians, rethink that notion. And get mad about something that angers God.

"God Gets Mad" by Rubel Shelly is licensed under a Creative Commons License. Heartlight encourages you to share this material with others in church bulletins, personal emails, and other non-commercial uses. Please see our Usage Guidelines for more information.