What can I do to help? 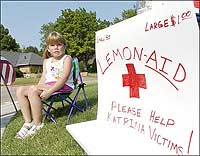 by Rubel Shelly (09/07/2005) | Special Features
Hurricane Katrina packed a mighty wallop when it hit the Gulf Coast of the United States last week. New Orleans, Biloxi, and many smaller venues in Louisiana, Mississippi, and Alabama are still reeling – and will be for months to years. The tragic stories of lives lost in the storm are heartbreaking. Nobody can estimate the damage to homes and businesses, infrastructure and jobs.

"Nightmare!" screamed one headline. Hundreds to perhaps thousands are believed dead. Search-and-rescue crews have had to bypass dead bodies in their scramble to try to save people who climbed trees, took shelter in attics, or sat forlornly on the roofs of destroyed houses.

There has been amazing heroism. Neighbor rescued neighbor. Stranger saved stranger. Police, firefighters, EMTs, volunteer workers – they have pushed their bodies beyond all reasonable limits. They have risked life and limb. And they have made a difference by rendering aid and saving lives.

On Wednesday of last week, bus convoys began moving some 25,000 evacuees from New Orleans to Houston. The famous Astrodome — not used for professional sporting events for years now — will be their temporary shelter! It has been cleared of events through December in expectation of being used that long.

The same series of events also brought out the very worst in others. Young and old roamed streets in order to loot stores! They weren't breaking in for bread or canned goods. They were trying on clothes and shoes on sidewalks and toting away television sets and computers. When an astonished reporter stuck his microphone in the face of one of them, he stopped for an interview. "You have to know how wrong this is!" he said. The looter grinned. He made some lame comment about how anybody else would do the same thing. I think not!

You and I must do more than alternately feel grief and express outrage. Each of us must find a way to help. Your company may create a relief fund. Perhaps your church will take a special offering to get relief supplies to people who are suffering. If not, pass the hat yourself. Or just give some money through a favorite charity or relief agency. But do something. And do it quickly!

If you've ever been given a helping hand and offered a glimmer of hope in a dark time, you know how critical it is. If you remember a time you needed help and none was offered, you know even more about what a critical moment this is!

[Jesus gave this illustration about loving our neighbor] "A Jewish man was traveling on a trip from Jerusalem to Jericho, and he was attacked by bandits. They stripped him of his clothes and money, beat him up, and left him half dead beside the road."By chance a Jewish priest came along; but when he saw the man lying there, he crossed to the other side of the road and passed him by. A Temple assistant walked over and looked at him lying there, but he also passed by on the other side."Then a despised Samaritan came along, and when he saw the man, he felt deep pity. Kneeling beside him, the Samaritan soothed his wounds with medicine and bandaged them. Then he put the man on his own donkey and took him to an inn, where he took care of him. The next day he handed the innkeeper two pieces of silver and told him to take care of the man. 'If his bill runs higher than that,' he said, 'I'll pay the difference the next time I am here.'"Now which of these three would you say was a neighbor to the man who was attacked by bandits?" Jesus asked.The man replied, "The one who showed him mercy." Then Jesus said, "Yes, now go and do the same." (Luke 10:30-37 NLT)

"Help for Katrina's Victims" by Rubel Shelly is licensed under a Creative Commons License. Heartlight encourages you to share this material with others in church bulletins, personal emails, and other non-commercial uses. Please see our Usage Guidelines for more information.