The Least I Can Do?

How do we move beyond election partisanship to moral change? 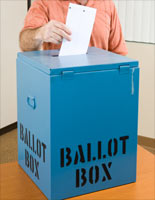 On one occasion an expert in the law stood up to test Jesus. "Teacher," he asked, "what must I do to inherit eternal life?"

"You have answered correctly," Jesus replied. "Do this and you will live."

But he wanted to justify himself, so he asked Jesus, "And who is my neighbor?"

In reply Jesus said: "A man was going down from Jerusalem to Jericho, when he fell into the hands of robbers. They stripped him of his clothes, beat him and went away, leaving him half dead. A priest happened to be going down the same road, and when he saw the man, he passed by on the other side. So too, a Levite, when he came to the place and saw him, passed by on the other side. But a Samaritan, as he traveled, came where the man was; and when he saw him, he took pity on him. He went to him and bandaged his wounds, pouring on oil and wine. Then he put the man on his own donkey, brought him to an inn and took care of him. The next day he took out two denarii and gave them to the innkeeper. 'Look after him,' he said, 'and when I return, I will reimburse you for any extra expense you may have.'

"Which of these three do you think was a neighbor to the man who fell into the hands of robbers?"

The expert in the law replied, "The one who had mercy on him."

Jesus told him, "Go and do likewise"

Have you noticed how cavalierly the name of God is invoked when those He created disagree with one another over issues of moral import? How is it, I wonder, that anyone could muster up the courage to sneak into Heaven and swipe Jehovah's signature stamp?

"It's the least I can do."
Having never obtained a passport, I rely on my intuition that Americans have become the world champs at this stratagem. It underlines our foreign policy debates and permeates our domestic politics as well. Both political parties have learned how to play this game. But, I believe the Lord deserves a position of honor a little higher than our bumpers.

Yes, there are critical issues at stake in most elections. And once again our airwaves and email were replete with affirmations that the choices were simple. But let's look beyond easy answers for a moment and consider the principle objectives.

Why not start with probably the toughest one: abortion. The epilogue to this epidemic would seem to be electing candidates who will work to repeal Roe v. Wade and then the problem is solved. Seems easy enough, but it probably ain't so. Christian ethicist Shaun Casey points out that the day after such a Supreme Court ruling, 15 states would immediately exercise their prerogative to legalize it under their state jurisdiction and another 20 would at least consider it before passing legislation one way or the other. And even if all 50 states outlawed abortion, the problem does not go away. If that were so, there would have been no need for legislation or lawsuits in the first place.

The solution to this or any of our pivotal moral issues is not found on buttons and banners. Nor is it realized by what we feel is righteous indignation, but is too often perceived as religious bullying and bigotry. And when have you ever truly breathed a sigh of relief when government came to the rescue? "The Great Society" didn't fix poverty any more than "No Child Left Behind" fixed education. While we may want to see our laws changed, such a change would not quickly fix the moral confusion that plagues our culture.

Whenever we take an "all or nothing" approach to a problem, it sure seems as if "nothing" wins 99% of the time. The reason we often fail to consider the incremental alternatives is because they require that each of us put forth a personally involved effort. We have and will prevent the abortion of far more babies by offering a safety net for mothers-to-be than we ever will by winning legal or political battles. So, do you and does your church support such ministry? That kind of ministry rarely gets done over coffee and caustic conversation — whether that partisan conversation is angry or gloating.

Here's another example. The challenges faced in our schools are innumerable. That was true before the Department of Education was created in 1979, and has continued to be the case even afterwards. Schools achieving the most success are quite often not the ones receiving the most money. They all need and receive funding, but the ones meeting challenges most effectively sure appear to be the ones where parents and the community are most involved. Ask most school principals which they would prefer, a government full of officials from their own political party or a strong PTO with community support and involvement; I think the latter would win by a landslide.

Voting for the ideal is a well-intentioned, but often fanciful notion that can divide friends, churches, and communities. And if all we do to address any given issue is campaign and vote for a candidate, have we really solved anything even if "we win"? Rather than merely electing someone to take care of sordid situations while we dispassionately "pass by on the other side," shouldn't we consider the divine strategy of reaching out to our neighbors with our own hands? Radical!

Maybe our slogan might be, "It's the least we can do."

Editor's Note:
We believe in the sanctity of life from conception. Any country that allows infanticide — through abortion or abuse — or geriatricide or any kind of selective murder wounds its soul. The point in this article, however, is that we need to resist the temptation of abdicating our discipleship to politicians and spend more time and effort personally ministering to the lost and broken around us.

"The Least I Can Do?" by Rob Woodfin is licensed under a Creative Commons License. Heartlight encourages you to share this material with others in church bulletins, personal emails, and other non-commercial uses. Please see our Usage Guidelines for more information.

Rob Woodfin is a printer and former community newspaper editor. Visit Rob's blog, Peculiar Perspective."He is an elder at the Church of Christ in Kimball, Tennessee. You can email rob at rob@woodfinprinting.com (Visit the Author's Website)