Would you wear the castoffs of the losers? 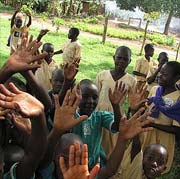 But godliness with contentment is great gain. For we brought nothing into the world, and we can take nothing out of it. But if we have food and clothing, we will be content with that. (1 Timothy 6:6-8 TNIV).

Hundreds of poor children in Nicaragua are wearing new shirts and caps, thanks to the relief organization World Vision and the National Football League. The shirts and caps, donated by the NFL and brought to the southern Nicaraguan city of Diriamba, commemorate the 2008 Super Bowl Champion New England Patriots.

In case you aren't a football fan, the heavily-favored Patriots actually lost the Super Bowl to the New York Giants — in the process ruining the first perfect season in the NFL in 35 years or so. But, did you ever wonder how championship teams get their shirts and caps to put on while they're still celebrating on the field or court? Well, the answer is that the companies who make the clothing crank out versions with both teams as winners so they can start selling their product by getting them on the players while they're still on TV. However, that leaves a lot of shirts and hats that celebrate the wrong team's victory; so some years ago, World Relief started taking those shirts to the poor in nations in Latin America and Africa. Better that than to destroy them, which was what happened before World Relief got involved.

I suppose that for some folks, what team logo is on their shirts just doesn't make a blip on their radar screens.

Maybe kids in Nicaragua ought to care that their t-shirts and caps have the wrong Super Bowl champ on them.

But there are hundreds, thousands, who don't. Millions in our world who wouldn't. Millions who couldn't care less what neighborhood they live in, as long as they have a place to live. Millions of parents who would love for their kids to go to a school, a real school, somewhere, so that they could learn and grow and stretch and have a chance to escape poverty and hopelessness. Millions who would give anything, anything, if they could give their kids three meals a day, or even just one, but instead have to watch their children grow weak and malnourished.

And what do those millions do? They go on about their lives, they do what they can, and perhaps by some miracle they get through the day able to find life's absolute necessities for themselves and their families. And if they can do that for that one day, then they're content. More than content. Ecstatic.

When was the last time you opened your closet and thanked God from your heart that it was full of clothes? Or do we more often worry about having "nothing to wear" — meaning by that, of course, nothing that makes us look 10 years younger and 10 pounds lighter. When was the last time you opened the refrigerator or the cabinet and praised God that it was full of food? Or walked into a supermarket and thanked him for the abundance you enjoy and the means to buy it? Or are we more likely to complain about leftovers again, or because something isn't prepared just how we like it, or because we have to make another trip to the store?

"Godliness with contentment ..." They go together. An important reminder, in a society where so many of us could, if we chose, enjoy the luxury of being particular. "We brought nothing into the world, and we can take nothing out of it ..." the Bible reminds us, probably because we can easily lose track of what life is all about.

What if we committed to a generosity that was more sacrificial?
Why do we have that compulsion to accumulate more and more? Why do we give in to it? After all, it isn't like we can take what we accumulate with us when our lives here are done. Obvious, of course, but it sort of opens our eyes to the farcical nature of our drive to acquire. The more we accumulate in this world, the more we leave behind when we go on to the next.

The fact is that there are just too many people in our world without the basic essentials of life. For a few of us in one of the most prosperous countries on the planet, how can we be anything but content? We must be content, because discontent dishonors the God who has given us so much. And beyond that, we must be content because greed leads us to spend our lives enriching ourselves while ignoring the predicament of people who really know what want is. When we're content, we see how much we have and are willing to help those who have less. When we're not, all we can see is what we want and feel so sure that we need.

Is it me, or is there something just vaguely embarrassing about the excitement with which the rest of the world accepts what America throws away? What if, instead of our cast-offs and hand-me-downs, the church committed to generosity that was a bit more sacrificial? What do you think pleases the Lord more: a church full of well-dressed, well-groomed, people in new clothes and new cars? Or a church full of people — content with what they have been given — who have put off buying new clothes and new cars so that they can share their abundance with folks who don't have the essentials?

I think I know the answer to that, and I think you do, too.

Command those who are rich in this present world not to be arrogant nor to put their hope in wealth, which is so uncertain, but to put their hope in God, who richly provides us with everything for our enjoyment. Command them to do good, to be rich in good deeds, and to be generous and willing to share. In this way they will lay up treasure for themselves as a firm foundation for the coming age, so that they may take hold of the life that is truly life (1 Timothy 6:17-19).

"Content with the Patriots" by Patrick D. Odum is licensed under a Creative Commons License. Heartlight encourages you to share this material with others in church bulletins, personal emails, and other non-commercial uses. Please see our Usage Guidelines for more information.