Better Get Used to It, Mr. McNair

Don't just hate being called that? 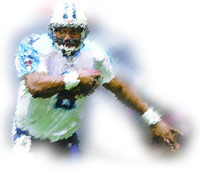 by Rubel Shelly (06/18/2005) | Leading in Hope
It was a fun story on the sports pages of Nashville's City Paper. Then it became a story I could understand. And finally it morphed into a commentary on life in general and how things work for all of us on Planet Earth.

Steve McNair is the outstanding quarterback for the Tennessee Titans of the NFL. He was the third pick overall in the 1995 draft of eligible college talent. He had played his college football at Alcorn State and got the nickname "Air McNair" because of a powerful and accurate passing arm.

Mastering the art of leading a professional football team, McNair shared the NFL's 2003 MVP honor with Peyton Manning. He led the league with a 100.4 passer rating and was the AFC's Pro Bowl Starter in 2004. He threw for 3,215 yards with a career-high 24 touchdowns and career-low seven interceptions.

The ten-year veteran had a tough season last year. He suffered a sternum injury that required surgery in the off-season. But there he was at the team's mini-camp. Healed and strong. Trimmer and fitter than at the same time last year. But quickly discovering, as the newspaper put it, "that he is no longer the new kid on the quarterback block." A rookie had come up to him and called him "Mr. McNair."

Hey, Steve, it happens to everybody!

Some abilities peak earlier than others in a normal life span. A few athletes can still perform well into their forties. Look at Roger Clemens! But athletes just put into sharp focus what happens to all of us. As you age, you have to be smart enough to make some adjustments. Let what you have learned over time work for you to compensate for eyesight or hearing or energy levels that aren't what they were a few years ago. Most important, find a way to pass along what you know.

The best coaches are people who have played the game.
Just imagine what it would mean for a twenty-something quarterback to get personal mentoring from a league MVP. Or a just-out-of-college trainee at your company to be taught the ropes by someone with years of experience. Or someone who has never taught Sunday School to work with a godly man or woman who has been serving God and others in that role for a decade.

It takes playing the position, working at the job, and being humbled by life to catch on to how things really work. The truly important things can't be written down and don't come in a manual. And those insights shouldn't be wasted.

The best coaches are people who have played the game well themselves.

Timothy, my dear son, be strong with the special favor God gives you in Christ Jesus. You have heard me teach many things that have been confirmed by many reliable witnesses. Teach these great truths to trustworthy people who are able to pass them on to others. (2 Timothy 2:1-2)

"Better Get Used to It, Mr. McNair" by Rubel Shelly is licensed under a Creative Commons License. Heartlight encourages you to share this material with others in church bulletins, personal emails, and other non-commercial uses. Please see our Usage Guidelines for more information.