How do we lift our spirits on difficult days? 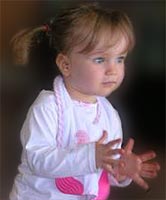 by Kelly Breece (07/21/2004) | Just for Women
"l just feel kind of depressed today. I don't really know why?" My husband remarked as we drove to church one Sunday morning.

"Well, I guess we just know a lot of people who are going through a lot of stuff right now." I replied.

For days it seemed that everyone with whom we spoke was dealing with a personal heartache — whether it was the loss of someone they loved or the threat of a serious illness. Even though the sun was shining brightly that morning, we both sat silently for the rest of the ride, staring out the window. Would we hear of even more sadness when we got to church?

After getting Shane settled in the nursery, I entered the auditorium and saw our song leader briefly explaining the arrangement of a song we were about to sing. Underneath his voice, thunder began rumbling outside the window. Trees began swaying swiftly in the wind on a backdrop of rain clouds that seemed to have appeared from nowhere. In a matter of minutes our sunny morning slipped to an eery, but strangely comforting darkness as a summer storm rolled in.

In that moment, as I listened to the words, I could almost physically feel my soul becoming lighter and lighter. Gazing at the rows of people around me, I could see one or two teary-eyed faces. They were also moved by the simple, yet profoundly spiritual lyrics.

There was one face, however, that especially captured my attention ... a baby girl, in her mother's arms, facing me. Her name is Faith, perfectly named, because that is what she personifies every day of her life. I watched her through my own welled-up tears as she clapped her tiny hands and laughed all throughout the song. She was born with spina bifida. Faith's parents were told that she would probably never be able to walk or do a lot of things that other little girls will do. That morning, however, as I looked into her angelic little face and watched her cheerfully waving at people around her, I saw something in her much more powerful than the ability to walk. In her I could see and feel the true meaning of the words that were singing.

There was one face that especially captured my attention.
I've heard the song many times, but that morning it rang louder and truer. No matter how broken we may feel in this world, we can know and enjoy "peace and joy and happiness," because we all have the promise of "no more sorrow ... someday". And there is no problem on this earth that will ever prove to be bigger than that promise.

Our present troubles are quite small and won't last very long. Yet they produce for us an immeasurably great glory that will last forever! (2 Corinthians 4:17)

"A Little Faith" by Kelly Breece is licensed under a Creative Commons License. Heartlight encourages you to share this material with others in church bulletins, personal emails, and other non-commercial uses. Please see our Usage Guidelines for more information.