For us to be 'cruciformed' means that we offer our hearts to be reshaped to be like Jesus' heart. It means we offer ourselves to be used by God to bless and serve others. 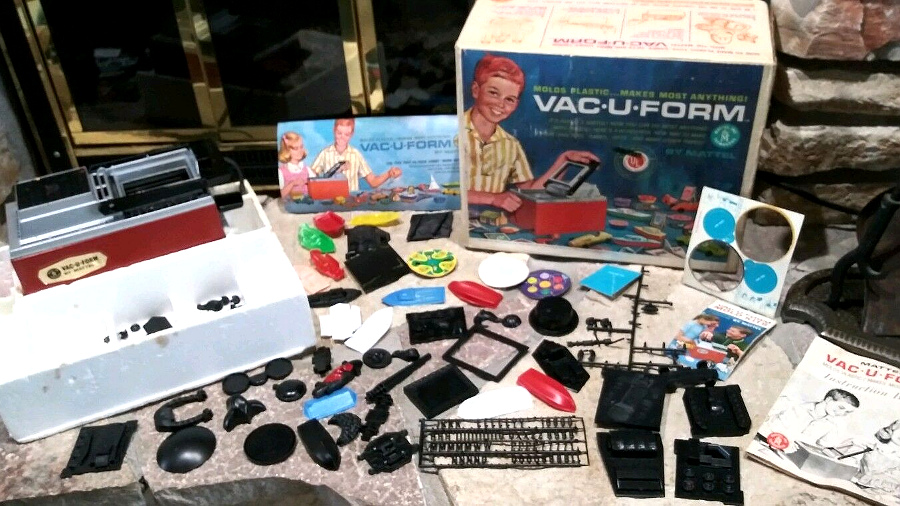 The suction drew the soft plastic tightly over the shape on the vacuum bed. I held the plastic in place until it began to cool. I removed the plastic sheet, separated it from the mold, and then trimmed the excess plastic from the newly formed object. I glued this newly formed piece (the top side of a tugboat) to the previously formed piece (the hull). I had made a floating toy boat to get my brother out of my hair. He quickly filled the sink with water and sudsy shampoo to play with his new toy. I then began making some neat stuff for myself!

What a blast! Nothing like heat, melting plastic, levers, a vacuum pump, and old caustic plastic cement in the hands of a little boy! Which is probably why I haven't seen one of those Vac-U-Forms advertised in decades. However, I won't forget what happens when warmed plastic is pulled over a mold and is sucked tight to it. That plastic is re-formed, or maybe better, transformed into something new.

Paul described this process in spiritual terms to the Corinthians. He first spoke of the finished work of a person transformed to be like Jesus:

Therefore, if anyone is in Christ, the new creation has come: The old has gone, the new is here! (2 Corinthians 5:17). 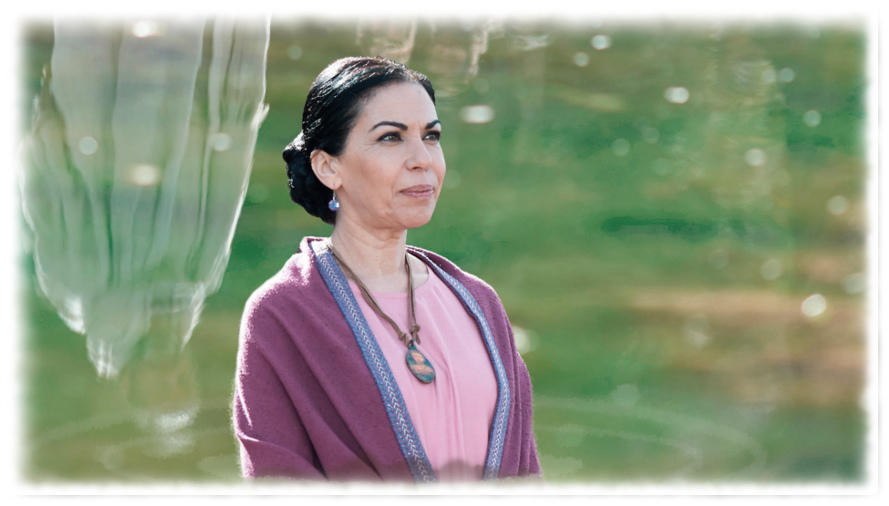 Notice the next phrase Paul wrote, as well: "All this is from God..."! The Corinthians' transformation was not something that they pulled off for themselves. Only God could do this kind of work. True transformation is something far beyond our human ability to achieve. We can no more "re-form" or transform ourselves into a new creation than the plastic sheet could make itself into a toy.

However, we do have a part to play in this process of transformation. Just as the plastic must be heated and give up its shape and become pliable to be re-formed, so must we. We must offer our wills to be re-created by God. Our hearts must be willing to be "de-formed" to be transformed by the Holy Spirit into the likeness of Jesus (2 Corinthians 3:18).

So, what can make our wills pliable? Why would we offer our hearts to be "de-formed" so we could be transformed? Paul suggests it's the power in Jesus' self-sacrifice on the cross:

God made him [Jesus] who had no sin to be sin for us, so that in him we might become the righteousness of God (2 Corinthians 5:21).

While Jesus' death on the cross may appear to be a ridiculous way to reach the hearts of a lost world, Paul knew the great power of Jesus' self-giving death on the cross to draw people to him (1 Corinthians 1:20-25; cf. John 12:27-34). 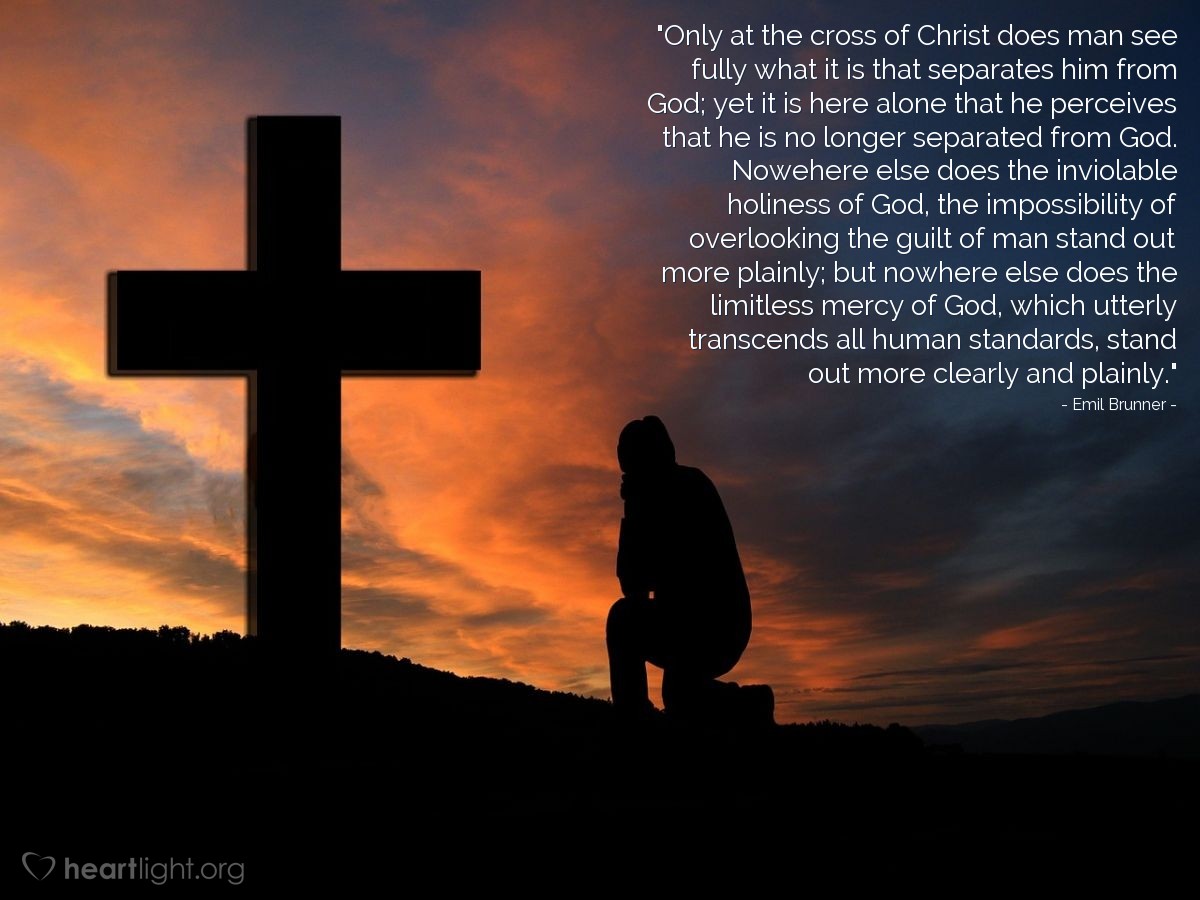 Mark broke his gospel story of Jesus into three parts, centering his message on the importance of the cross.[ONE] Today's message is a glimpse of this story so that we can see our goal that lies at our stories goal. In Mark's key central section on discipleship, Jesus repeatedly told his closest followers that he would go to Jerusalem, be killed, and then rise from the dead on the third day (Mark 8:31-32; 9:30-32; 10:32-34). They could not grasp what he was saying. In fact, the first time Jesus told them, Peter rebuked the Lord for saying he was going to die in Jerusalem (Mark 8:32).

Because Jesus' disciples could not — or perhaps, WOULD not — understand his going to the cross, they misunderstood what the Lord was calling them to do with their lives. He emphasized their need to follow his example of self-giving love to serve others (Mark 10:45). For them to follow Jesus as their Lord, however, they would have to be "cruciformed"! They must be reshaped by the cross of Christ so that the Holy Spirit could transform them into Jesus' likeness. They must be "cruciformed"!

And calling the crowd to him with his disciples, he said to them, "If anyone would come after me, let him deny himself and take up his cross and follow me. For whoever would save his life will lose it, but whoever loses his life for my sake and the gospel's will save it" (Mark 8:34-35).

For us to be "cruciformed" means that we offer our hearts to be reshaped to be like Jesus' heart. It means we offer ourselves to be used by God to bless and serve others, not seek special recognition for ourselves. Each of us must die to our selfish will and walk with Jesus in the way of the cross, choosing that God's will, not our will, be done in our lives.

Being conformed to Jesus through the cross is one of the reasons that baptism was more emphasized in the early church than it is in many groups today.[TWO] More than something they did — remember, baptism is a passive verb, an act of grace that someone else does to the believer — baptism was a time when early disciples shared in Jesus' death, burial, and resurrection while declaring their faith in him as their Savior (Romans 6:3-14; Colossians 2:11-12; 3:1-4). They offered themselves to be "re-formed" into the likeness of Jesus by the power of the Holy Spirit. They voluntarily gave themselves to God to be "cruciformed" — to be transformed by Christ and to be clothed with Christ (Galatians 3:26-27).

For the next several weeks, we will journey with Jesus and his closest followers through this life-changing time in his ministry. As we do, we will keep the goal of this journey in mind: to be "de-formed," "re-formed," and transformed to be like Jesus and serve others as he did. The goal of our lives, then, is not just to be "cruciformed"! To be "cruciformed" is the beginning. It's the start of a new life as a cross-shaped disciple of Jesus. 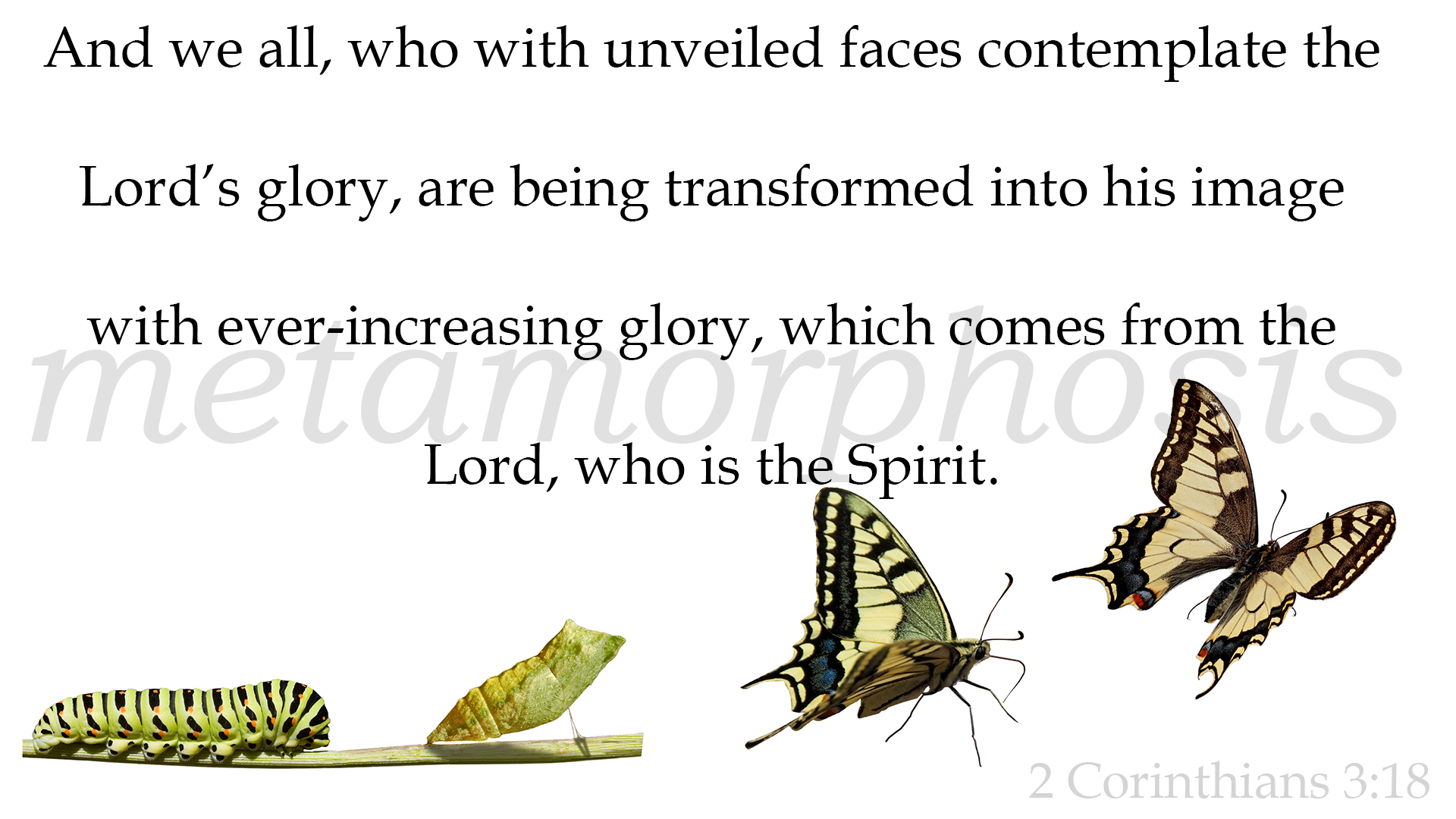 The goal is for each "cruciformed" disciple to live on a new mission to serve the lost and broken world as Jesus did:

Therefore, if anyone is in Christ, the new creation has come: The old has gone, the new is here! All this is from God, who reconciled us to himself through Christ and gave us the ministry of reconciliation: that God was reconciling the world to himself in Christ, not counting people's sins against them. And he has committed to us the message of reconciliation. We are therefore Christ's ambassadors, as though God were making his appeal through us. We implore you on Christ's behalf: Be reconciled to God. God made him who had no sin to be sin for us, so that in him we might become the righteousness of God. (2 Corinthians 5:17-21 — Bold emphasis added to draw attention to our new mission as Christ-formed people!)

[ONE]Mark's gospel can best be outlined in the following way:

Being 'cruciformed' is the beginning of a new life as a cross-shaped disciple of Jesus!

[TWO] Many groups that believe in the importance of baptism still separate it from the time a person calls on Jesus as Lord and believes in Jesus' saving work in his death, burial, and resurrection to save them. This separation is despite the emphasis among the early disciples we see in Acts. They were baptized as closely in time to their faith, confession, and repentance as possible. Notice Luke's emphasis in the telling of the first conversions at Pentecost:

Also, notice the similar emphasis with the conversion of the Philippian jailer and his household:

Then they spoke the word of the Lord to him and to all the others in his house. At that hour of the night the jailer took them and washed their wounds; then immediately he and all his household were baptized. (Acts 16:32-33 — Bold added for emphasis.)

The early Christians did not separate faith and baptism into two disconnected acts nor did they see calling on Jesus as Lord and Savior as something to be separated from their baptism (Acts 22:16). Instead, they kept baptism and faith together (Galatians 3:26-29) because more than being an act of obedience, baptism was actually participating in Jesus' saving work — his death, burial, and resurrection — through faith (Romans 6:3-14; Colossians 2:12; 3:1-4). 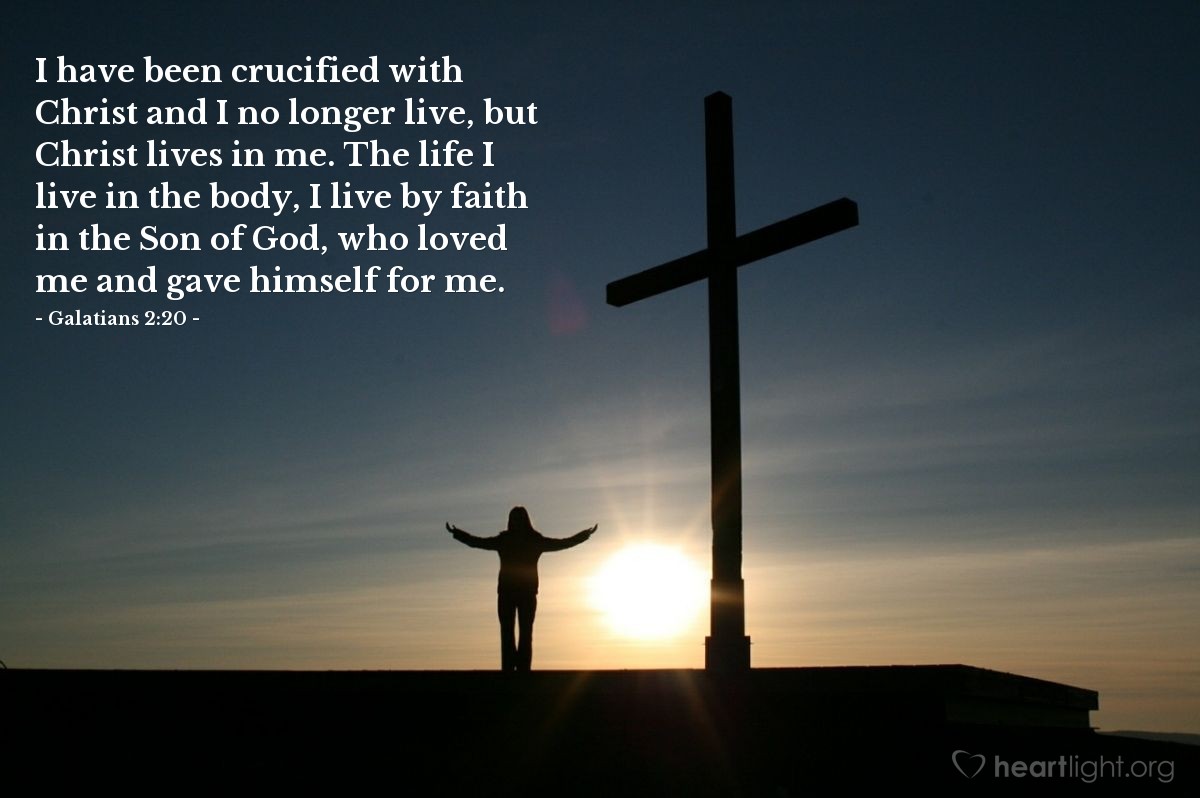 Special thanks for the use of the Jesus related images in this series to Free Bible Images and The Lumo Project. Those pictures associated with the ministry of the apostle Paul are courtesy of Boettcher+Trinklein Television Inc. © All rights reserved, from ToTheEndsofTheEarthMovie.com.

"CRUCIFORMED!" by Phil Ware is licensed under a Creative Commons License. Heartlight encourages you to share this material with others in church bulletins, personal emails, and other non-commercial uses. Please see our Usage Guidelines for more information.