God does the unthinkable to bless us immeasurably, in Christ! 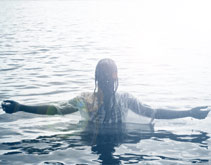 God was reconciling the world to himself in Christ, not counting people's sins against them ... (2 Corinthians 5:19 TNIV).

An Indian court this week sentenced a 75-year-old doctor to three months in jail for accepting a bribe back in 1985. The doctor accepted the payment of 25 rupees for issuing a fake medical certificate. He was convicted in 1992 and sentenced to a year in jail, but the case dragged on from one appeal to the next. Appeals finally exhausted, the doctor was taken into custody after having his sentenced reduced to three months. The court felt that a year was too long a sentence for the size of the bribe.

Twenty-five rupees is worth about fifty-one cents.

Now, I don't condone bribery, but I just don't think the good doctor was even trying very hard.

From a certain point of view, the 25-year prosecution of a 75-year-old for a half-dollar bribe seems just a bit silly. I mean, aren't there bigger fish to fry in India? Seems like he could just get a pass, doesn't it, with his age and the size of the bribe and all? Make him pay it back and get on with life.

From a certain point of view, that makes sense. But it didn't to the prosecuting attorney on the case, Vipin Kumar Sinha. "[The doctor] thought he would get a reprieve from the court," Sinha told reporters after the verdict. "But all the charges [have] been proved against him." To him, it seems self-evident. You do the crime, you do the time. Bribery with fifty cents is still bribery, and to make an allowance for one person is to set a dangerous precedent for others. Justice demands a consistent punishment for crimes committed.

I think sometimes we see God like that. We imagine him sitting in front of a big ledger, keeping track of our sins, never missing even one. I think that's why so many people react negatively to God and to spiritual matters: who wants to be prosecuted for everything we've ever done? Who can love an accountant with a pencil stuck behind his ear, carefully noting all the bad decisions you've made and bad things you're done and weighing out justice for each of them?

For some, religion is all about balancing the ledger: doing enough good to cancel out the bad. But it doesn't work like that at all. Whatever good the doctor may have done in his life, you don't see the prosecutor giving him credit. Justice demands restitution of some sort, or punishment, or both. Thinking in terms of balancing a ledger is rearranging deck chairs on a sinking ship. Sin doesn't balance. It doesn't just go away. Ask the good doctor in India. It has consequences that reach far beyond the initial act. If you doubt that, you have to look only as far as demands of its victims for justice to see proof.

We're on the hook, you see, every one of us. Just as surely and inevitably as that doctor. Oh, sometimes the consequences of what we do take a little time to catch up with us. But catch up with us they most surely do.

Paul talks about God "reconciling himself to the world in Christ." He's saying that in spite of our guilt, in spite of the fact that our sins put us at odds with God, God has chosen to settle things between us. He does this by doing what that prosecutor in India really couldn't: he just doesn't count our sins against us. He chooses to regard us with grace and forgiveness and love and offer us mercy instead of justice. He changes the rules in our favor.

And he does all this, Paul tells us, "in Christ."

There's a lot resting on those two words. Many of the New Testament writers spill a lot of ink writing about just how Jesus' death and resurrection settle matters between God and us. Is he our substitute, suffering in our place? Is he an atoning sacrifice, appeasing God's wrath? Does he impart to us his righteousness and faithfulness to God? Does he include us in his victory over sin and death through our faith in him?

Yeah, so you've blown it.
There's probably some degree of truth in all those ways of understanding Jesus' work, but then again they're also all imperfect metaphors for something that isn't to be explained as much as trusted. At some point, the language of rationality and explanation has to give way to the language of faith and praise. In the end, it's less important that we answer the question of exactly what God was doing "in Christ" than that we answer the question of whether or not we are "in Christ."

"All of you who were baptized into Christ have clothed yourselves with Christ," Paul says in another place (Galatians 3:27). He means more than merely being dunked in water, of course: he's also talking about the faith and repentance that precede baptism. Being "in Christ," then, is a matter of trust. It's a matter of turning away from all the old ways of living and coping and getting along, and replacing whatever we once trusted in with Jesus. Even that, of course, is a gift of God. But God responds to that faith in Jesus — shaky and tentative as it may be — by clearing the charges against us, so to speak.

So much for that picture of God all hunched over his ledger, obsessively tallying our sins. The God who delights in finding fault with his creatures is a construct of human self-loathing and Pharisaical self-righteousness. The God of the universe is the God who in some way that defies explanation shared our humanity, died, and rose again so that our sin would not be counted against us. "If anyone is in Christ, the new creation has come: The old has gone, the new is here!" wrote Paul (2 Corinthians 5:17-18). And so it would be very clear, he went on to say, "All this is from God, who reconciled us to himself through Christ and gave us the ministry of reconciliation."

"All this is from God": the God of the new creation, the God of beginning again, the God of life from death, the God of hope from despair. The God who comes to his sinful, guilty children, raises our heads, and gives us grace, mercy, and love — and a new purpose to take that message of reconciliation to others who need to hear it.

Yeah, so you've blown it. You're guilty. There's no way to hide it, no way to justify it. But come to Christ in faith and repentance, and you'll find something far better. You'll find a God who knows what you've done, and why you've done it, but who has chosen to suffer rather than to let your sins come between you and him. And you'll find a new creation, a new life full of hope and promise, that's yours to be had.

All this is from God.

May he be forever praised.

"In Christ" by Patrick D. Odum is licensed under a Creative Commons License. Heartlight encourages you to share this material with others in church bulletins, personal emails, and other non-commercial uses. Please see our Usage Guidelines for more information.