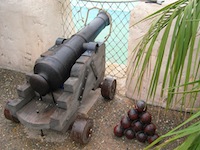 by Tim Archer (03/13/2013) | Hope for Life
The year was 1761. King Carlos III of Spain, realizing that his country would soon be involved in the Seven Years' War, appointed Juan de Prado as commander-in-chief of Spain's key holding in the Americas: Cuba. Specifically, de Prado was sent to Havana to prepare the city for the inevitable invasion by British forces.

The king gave de Prado a task that was of highest priority: fortify La Cabana hill, which overlooked the Morro castle. The Morro protected the Havana harbor; as long as the castle remained in Spanish hands, the city would be unassailable.

A year after de Prado's arrival in Havana, the British came. One of their first attacks was on La Cabana. They took the hill easily, for the fortifications had not been made. The city fell soon after, her defenses undermined by de Prado's failure to prepare.

Without doubt, he had many excuses to give. Yellow fever had taken a heavy toll on his work force. Other tasks needed to be tended to, important tasks in a city like Havana. But in the end, one thing mattered: de Prado didn't make the necessary preparations. Cuba fell into the hands of the British, marking the end of Spanish dominance in the Americas.

Jesus told a story about a group of young women who missed a wedding feast because they weren't prepared when it was time to go into the banquet hall. He ended the story by saying "Therefore keep watch, because you do not know the day or the hour" (Matthew 25:13). Both the apostle Paul and the apostle Peter said that Jesus will come at an unexpected time, like a thief in the night (1 Thessalonians 5:2; 2 Peter 3:10). Because of that, God's people are expected to be ready, all of the time.

We know that Jesus is coming back. We know that we need to be prepared when he comes. Yet somehow, so many of us find excuses for not getting ready. There's too much to do. There's always tomorrow.

Remember the Battle of Havana. Remember Juan de Prado and his failure to get ready. The king told him exactly what he needed to do, yet when the time came, de Prado didn't do what he was told.

God has told us to be prepared. We are to change our lives and believe in his Son. We are to be ready and watching for Jesus' return. We don't know when it will be, but we know we need to get ready.

Yet somehow, so many of us find excuses for not getting ready
Jesus is coming again. Don't let him take you by surprise.

Want to know more about how to be ready? Write to me at tarcher@heraldoftruth.org or join the conversation atwww.hopeforlife.org.

"Getting Ready" by Tim Archer is licensed under a Creative Commons License. Heartlight encourages you to share this material with others in church bulletins, personal emails, and other non-commercial uses. Please see our Usage Guidelines for more information.