How can we avoid the foolish man's crash? 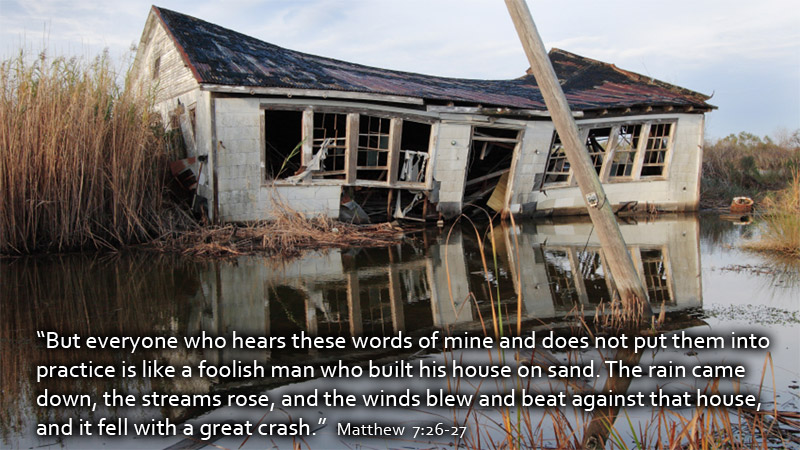 Most of us know that we should never call someone else an idiot. However, we've heard these words said many times in situations that were mostly private. The words are nearly always said in frustration about someone who has blown his or her opportunity in life because of something very unwise that he or she had done. Sometimes, we have even used the phrase, "What an idiot!" to describe our own behavior when we were frustrated or deeply disappointed in our personal choices.

"I've never met a long-term Christian whose knowledge of the Bible did not exceed her or his obedience of it."

I remember the first time I heard something like this. Honestly, I hadn't thought about it much, but the more I reflected on this statement, the more it bothered me because it was so true!

I've heard these words in songs so many times I cannot count them. I've sung them many times. All too often, I am afraid I haven't connected these words to Jesus and his closing thoughts in the Sermon on the Mount. 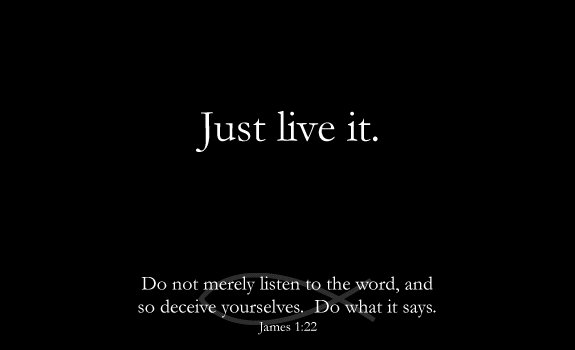 The Holy Spirit's goal was never to merely inspire the words of Scripture, but to fashion us through the Scriptures for godly living (2 Timothy 3:16-17). The Spirit longs to work in our lives through the Scriptures to transform us to be like Jesus (2 Corinthians 3:18). The Holy Spirit's goal for the inspired Scriptures is to produce the fruit of character and compassion: love, joy, peace, forbearance, kindness, goodness, faithfulness, gentleness and self-control (Galatians 5:22-23). So as disciples of Jesus, we are not called to be admirers of the word or hearers of the word, but doers of the word (James 1:22).

No one epitomizes the failure of using the Scriptures wisely quite like Solomon. He is the ultimate foolish man in Jesus' story at the end of his Sermon on the Mount. Solomon was considered one of the wisest men to have lived in ancient times. He made Israel a nation of strength, beautiful architecture, opulent royal living quarters, and great wealth. People came from all over to see if the rumors of his great accomplishments were true.

God lavished grace upon us to not only save us, but also to call us to be different and to make a difference.
In the middle of this wise man's accomplishments was great foolishness (Nehemiah 13:26). He traded away righteous character for lavish experiences and forgot compassion in his mistreatment of others. He sold out marriage to making treaties by marrying many wives of foreign leaders. He compromised the worship of God alone to the idolatries of his wives and their children. He built his great kingdom on the backs of the poor and laborers he mistreated and the general population he taxed to pay for his extravagance. Solomon built his great empire on the sand and like the foolish man in Jesus' story, it all came crashing down in one generation after his death.

Jesus said very hard words to his disciples about the importance of obeying God and not just knowing the teachings of God:

Not everyone who says to me, "Lord, Lord," will enter the kingdom of heaven, but only the one who does the will of my Father who is in heaven. Many will say to me on that day, "Lord, Lord, did we not prophesy in your name and in your name drive out demons and in your name perform many miracles?" Then I will tell them plainly, "I never knew you. Away from me, you evildoers!" (Matthew 7:21-23).

If the sad example of Solomon doesn't capture our attention, then hopefully the words of Jesus will. God lavished grace upon us to not only save us but also to call us to be different and to make a difference (Ephesians 2:8-10). Jesus is not looking for admirers, but for real followers. He is looking for true disciples who are willing to obey what he has taught (Matthew 28:18-20) and emulate how he lived (Luke 6:40). 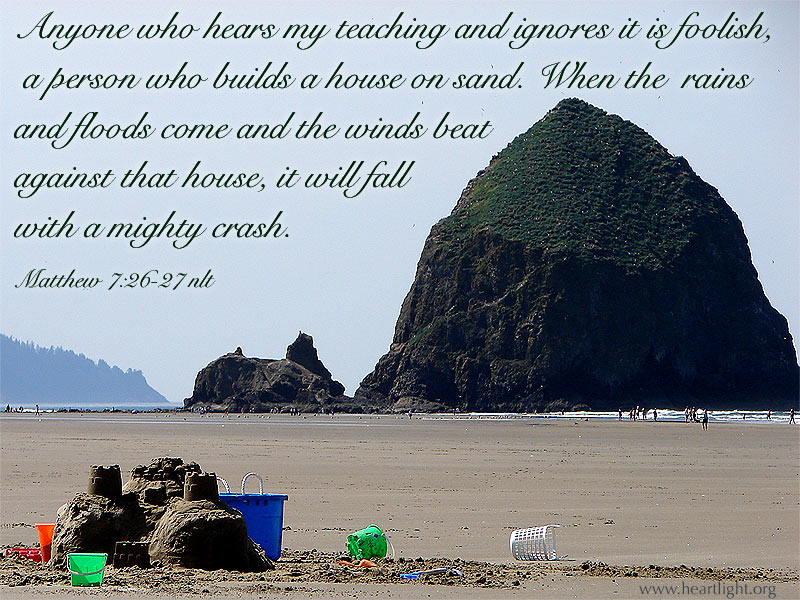 " The Foolish Man's House Went..." by Phil Ware is licensed under a Creative Commons License. Heartlight encourages you to share this material with others in church bulletins, personal emails, and other non-commercial uses. Please see our Usage Guidelines for more information.