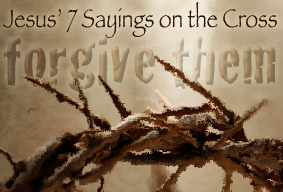 [Jesus said] This, then, is how you should pray:

Our Father in heaven,
hallowed be your name,your kingdom come,
your will be done
on earth as it is in heaven.Give us today our daily bread.Forgive us our debts,
as we also have forgiven our debtors.And lead us not into temptation,
but deliver us from the evil one,
for yours is the kingdom and the power and the glory forever. Amen.

(Matthew 6:9-13 with traditional ending from the TNIV).

The familiar words of the Lord's Prayer have been inspiring and instructive for Jesus' followers for centuries. Yet what is gently implied in one line of the Lord's Prayer — "... forgive us... as we also have forgiven..." — strikes us like a thunderbolt in the verses that follow:

This is a shattering truth! We will be forgiven only to the extent we are willing to forgive! We can dry up the grace flowing to our hearts by being graceless toward others!

But, how can this be?

How can our forgiveness be conditional on anything?

Doesn't the Father realize how badly these people have hurt us?

Why does Jesus place such a high value on us forgiving those who have wounded and wronged us?

Doesn't he know what they've done to us — betrayed, abandoned, cheated, ridiculed, mocked, and rejected us?

Maybe we misunderstood the message from Jesus? Maybe with some high-sounding theological gyrations we can work ourselves around the sharp realities of Jesus' words.

However, when we listen to Jesus' teaching, he makes clear he is serious about our being a people of radical forgiveness. Jesus told a story about an unmerciful servant who had been forgiven a huge debt he could never repay, yet this servant was unwilling to forgive a large — but repayable — debt owed him by a co-servant (Matthew 18:21-35). Jesus' words are chilling as he makes clear the meaning of his story:

Then the master called the servant in. "You wicked servant," he said, "I canceled all that debt of yours because you begged me to. Shouldn't you have had mercy on your fellow servant just as I had on you?" In anger his master turned him over to the jailers to be tortured, until he should pay back all he owed.This is how my heavenly Father will treat each of you unless you forgive your brother from your heart (Matthew 18:32-35).

Jesus wants us to know that God is serious about forgiveness!

When we examine other passages in the New Testament, we hear this same recurring theme. The apostle Paul challenged Christians to use the example of God and the sacrifice of Jesus as their models of forgiveness:

And do not grieve the Holy Spirit of God, with whom you were sealed for the day of redemption. Get rid of all bitterness, rage and anger, brawling and slander, along with every form of malice. Be kind and compassionate to one another, forgiving each other, just as in Christ God forgave you.Be imitators of God, therefore, as dearly loved children and live a life of love, just as Christ loved us and gave himself up for us as a fragrant offering and sacrifice to God (Ephesians 4:30-5:2).

Paul uses similar teaching with a community of new believers in Colossae (Colossians 3:12-14).

How can we not ask God to do the same thing?
A great example of this kind of radical forgiveness is Stephen, who was stoned to death by his religious enemies. His words, uttered shortly before his death as vicious attackers pounded the life out of him with large stones, are both powerful and convicting:

While they were stoning him, Stephen prayed, "Lord Jesus, receive my spirit." Then he fell on his knees and cried out, "Lord, do not hold this sin against them." When he had said this, he fell asleep (Acts 7:59).

These words are a powerful reminder of the high calling Jesus' followers have: we are to forgive as generously as Jesus forgave... not just us, but even those who were responsible for his torturous death. Stephen's words echo the Lord's words at the crucifixion. Jesus was arrested and beaten. He was unfairly tried and scourged. He was mocked by the religious authorities, the crowd, soldiers, and one of the criminals crucified next to him (Luke 23:32-39). Yet in the middle of humanity's worst moments, we see one of heaven's greatest gifts. Jesus simply, yet amazingly, said: "Father, forgive them, for they do not know what they are doing" (Luke 23:34).

While many truths have been derived from this saying, two seem most clear:

Jesus said it. Stephen repeated it. How can we not ask God to do the same thing with those who have wronged us?

"Father Forgive Them!" by Phil Ware is licensed under a Creative Commons License. Heartlight encourages you to share this material with others in church bulletins, personal emails, and other non-commercial uses. Please see our Usage Guidelines for more information.