Wonder what all those other guys did? 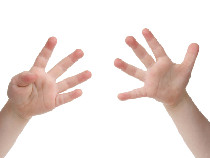 As he was going into a village, ten men who had leprosy met him. They stood at a distance and called out in a loud voice, "Jesus, Master, have pity on us!"

When he saw them, he said, "Go, show yourselves to the priests." And as they went, they were cleansed.

One of them, when he saw he was healed, came back, praising God in a loud voice. He threw himself at Jesus' feet and thanked him — and he was a Samaritan.

Jesus asked, "Were not all ten cleansed? Where are the other nine? Was no one found to return and give praise to God except this foreigner?" Then he said to him, "Rise and go; your faith has made you well"

Where were the other nine? If human beings haven't changed much in the last couple of millennia, I think I have an educated guess at the answer to that question.

One went on a speaking tour, telling audiences how he was cleansed of leprosy — and how they could be, too. No doubt he told the people who came to hear him how he had kept the Law of Moses diligently, or attended the synagogue regularly, or said the right prayers, or lived a virtuous life. Today he would no doubt be doing infomercials on late night TV hawking a skin-care system or herbal supplement. And people would lay down their money for the privilege of buying a dream that they, too, could be healed from what ails them. He would conveniently forget, though, that he was healed because Jesus heard his pleas for compassion.

One, I imagine, took on the role of victim. Never able to get past the rejection and abuse he suffered at the hands of his community, he found it very comfortable to give back what he had received. He would have lived in isolation and cynicism, never able to love, never able to trust. Ironic, really: though his leprosy was cleansed, though he was welcomed back to the community, he could never find a home there. The isolation his leprosy once forced on him gave way to an isolation he chose for himself through his bitterness. As for gratitude, what did he have to be grateful for, after the life he'd been forced to endure?

One who regretted all that he had missed when he had leprosy, decided that he would miss nothing else that life had to offer. He embraced experience after experience. Searched for pleasure after pleasure. His life became one hedonistic ego trip after another. Other people became objects, only valuable for what they could give him. Gratitude — well, gratitude just never found a place in his life. Gratitude is impossible when you're only focused on yourself.

One, I think, intended to go back. He promised he would, right after he went to the Temple and showed himself to the priest. But once he got there, his head was turned by the impressive buildings, the priests' robes, the altars and incense and trappings of religion. This Jesus was dangerous, they told him. He was a false prophet. A charlatan. Jesus couldn't have cleansed him, they told him, so there was no need to go back and thank him. They told him to offer some sacrifices instead, and of course he did. And his gratitude was sincere enough, but the religious system became easily enough the object of that gratitude. Jesus was lost, a hazy memory of another time and place.

One became an activist, working tirelessly to promote leprosy awareness and win grants for leprosy research. He worked hard at his calling, and accomplished much good. So much good, in fact, that he completely forgot that his own cure had come about because of God's grace, not research or awareness. He was thankful, yes, but increasingly for big donors and medical progress.

One started volunteering to work with leprosy victims. He brought them food and clothing. Kept them company. His heart went out to them because he had been one of them, and he would never forget what that had been like. And they appreciated what he did for them, but they didn't much hear his story. He served, but forgot to tell them what God had done for him. And so the one thing he could never really offer them was hope that their circumstances might change as dramatically as his had.

God doesn't need our gratitude.
But if human beings haven't changed much in the last couple of thousand years, then I'd guess that at least three didn't come back simply because they got too busy. After all, they had to get back to their lives. They had livings to earn. Families to raise. Things to do. Marks to make in the world. Five years later, if you'd asked them if they were thankful, they would no doubt have affirmed it. But they got so busy in and caught up by and anxious about the events of their new lives that they scarcely gave their old ones a thought. They didn't think that much either about the day that their lives changed so dramatically, or the One through Whom the change came about. And so their busy, productive lives bore little lasting trace of the miracle they had received.

Why? Because gratitude, I believe, is the only trace of a miracle that's left in our lives once it has worked its power and accomplished its task. Gratitude keeps memory alive. It's a constant token that we carry with us of the blessings God has given us. In these difficult times, gratitude reminds us how good God is. When we don't know what to do, gratitude gives us clarity of purpose. When we're down and discouraged, gratitude infuses us with joy and gives us reason for hope.

I'm glad that we celebrate a holiday called Thanksgiving in America. It's good that we take a couple of days away from the usual rhythms of our busy lives just to remember how much God has given us. I'm concerned, though, that if we can't cultivate the habit of gratitude throughout the year, by the time that fourth Thursday in November rolls around we'll find it very difficult to be thankful. Our lives get so busy and hectic and stressful, and I'm concerned that we're too much like those nine lepers: never quite able to find our way back to Jesus to give glory to God for the wonderful blessings he's given us.

God doesn't need our gratitude. Jesus doesn't need to see us there at his feet. But he knows we need it and he notices when we don't. "Where are the other nine?" he once asked. He knew, though.

"The Other Nine" by Patrick D. Odum is licensed under a Creative Commons License. Heartlight encourages you to share this material with others in church bulletins, personal emails, and other non-commercial uses. Please see our Usage Guidelines for more information.