One Out of Ten

Time to stop and say thanks 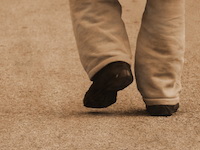 As we see in Chapter 17 of the Gospel of Luke, Jesus was traveling along the border between Samaria and Galilee. The people of Galilee were his people, Jews. The people of Samaria were the others, the half-breeds, the ones that the Jews wouldn't have anything to do with.

Unless they had leprosy, a terrible disease that forced people to live away from the rest of society. Then Jews and Samaritans could mix. As these ten men had done. Nine were Jews. One was a Samaritan.

They saw Jesus from a distance and called to him, asking to be healed. In answer, Jesus told them to go show themselves to the priests. According to the Law of Moses, the law that the Jews followed, that was the only way a leper could be certified as having been healed. He had to show himself to the priests.

As they went along, they were healed. Cleansed, as the Bible says.

Only one of them went back to thank Jesus. The foreigner. The Samaritan.

What about you? Do you stop to recognize the things that God has done for you? Do you thank him and praise him for his goodness?

Want to talk about what God has done for you? Join our discussion at www.hopeforlife.org or write to me at tarcher@heraldoftruth.org .

"One Out of Ten" by Tim Archer is licensed under a Creative Commons License. Heartlight encourages you to share this material with others in church bulletins, personal emails, and other non-commercial uses. Please see our Usage Guidelines for more information.