When Your Hero Falls

What do you do when your hero makes a big mistake? 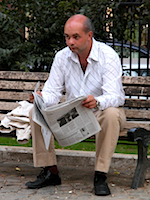 His name was Uzziah, and we read his story in the Bible, in the book of 2 Chronicles, chapter 26. We can read that he was a religious man, trying to do what God wanted. Because of that, God blessed the king with great success, militarily and economically. Everything he did turned out well.

Until he got too proud. Then Uzziah decided that his power as king wasn't great enough, that he wanted the power the priests had as well. When he tried to go against God's law and make an offering in the temple, God gave Uzziah a terrible disease. The king was immediately removed from public life and died in shame a few years later.

Some of you know the story. You've read it in the newspaper: the pastor caught in sexual sin, the church leader found to be embezzling funds, the public figure with a drug problem.

Others have lived the story. Someone that you believed in failed in a terrible way. Your role model turned out to have feet of clay. A person you trusted betrayed that trust.

We know how one young man reacted back in Uzziah's day. We read about it in the book of Isaiah, chapter 6: "In the year that King Uzziah died I saw the Lord sitting upon a throne" (Isaiah 6:1).

I don't think the timing is coincidental. I think it took Uzziah's death for Isaiah to really see the Lord, to recognize who the real king was.

Who is between you and God? Who are you letting be bigger than God in your life? Who keeps you from really seeing the Lord?

If I can help, write to me at tarcher@heraldoftruth.org or join the discussion at www.hopeforlife.org.

"When Your Hero Falls" by Tim Archer is licensed under a Creative Commons License. Heartlight encourages you to share this material with others in church bulletins, personal emails, and other non-commercial uses. Please see our Usage Guidelines for more information.