Have you offered sight to the blind? 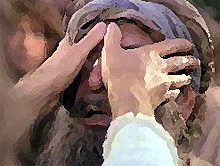 by Cathy Messecar (11/02/2013) | Just for Women
Imagine you're holding your newborn son. Perfect in every way. No treasure rivals a healthy child, but a few weeks later, an uneasy feeling invades. Your son turns his head toward sounds, but his eyes don't focus on anything — not even your face.

To this set of parents and this son, blindness became as familiar as daily bread (John 9:1-41). The son never saw a minnow or the faint yellow of fresh butter. The parents never witnessed his wonder at seeing a puppy or a lightning bolt.

By adulthood, darkness underwrote his world. He had no comprehension of light besides descriptive words. Around Jerusalem, the tentative man who had to feel his way around town was well known. Locals could tell any newcomer, "Oh, he's been around for years... blind since birth."

One day Jesus and his disciples passed near this blind man, and as Jesus noticed the man his disciples asked, "Who sinned, this man or his parents?"

Perhaps the sightless man overheard Jesus' answer. "Neither... this happened so that the work of God might be displayed in his life" (John 9:3 NIV). Jesus continued, "Night is coming, when no man can work. While I am in the world, I am the light of the world" (John 9:4-5). 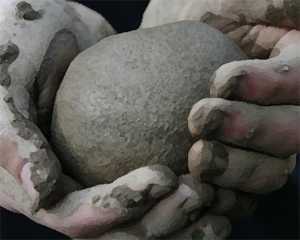 The Miraculous Clinic for the Blind was about to change one more life. Jesus started the ball rolling with mud balls. Instead of immediate creation of sight, Jesus mixed a Sabbath-mud-and-saliva paste and smeared it on the man's eyes: "Go," he told him, "Wash in the pool of Siloam" (John 9:7).

Wherever the blind man was in Jerusalem, he obediently groped his way toward the pool.

Did he encounter curious locals?

Did hecklers ridicule his mudpack?

Did brats jeer his stumbling walk or try to trip him?

Did citizens pity him, thinking that both his mind and sight were now gone?

Whatever he encountered, he pushed on to the pool of mercy.

The Father's assignment given to Jesus remains our spiritual calling today! 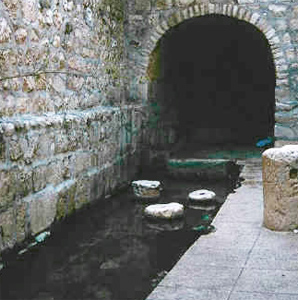 When he reached the water, did he kneel and dip his hands in the water? Or with abandon, did he splash into the pool, dipping his head beneath the surface? Did he rise, flinging locks, shaking off droplets, wiping watery dirt from his face and eyes?

With the soil of the earth washed away, his eyes opened. God met him there. Sweet sight. A spectrum of color. Adrenalin rush. Words and objects connected. For the first time, he had a picture-dictionary of his lifetime vocabulary.

On that Sabbath, the blind man saw a mural — his parent's faces, shimmering water, plants, his own hands, the synagogue, and scowls from religious zealots. Yes, ugliness treaded the boundaries of this healing. The Sabbath-protectors aligned Jesus with sinners. Their anger stemmed from his claims to the title of Messiah and his repeated so-called Sabbath offences.

In the first slew of questions from the religious leaders, the healed man couldn't identify Jesus. He'd never seen him. After more questions later that day, still without a face-to-face meeting, the man declared Jesus was a prophet (John 9:8-17).

Afterwards, cranky religious leaders asked further arbitrary questions of the healed man, and he confirmed Jesus' deity with his notable reply: "Now that is remarkable! You don't know where he comes from, yet he opened my eyes" (John 9:30).

Jesus heard that they had thrown him out, and when he found him, he said, "Do you believe in the Son of Man?""Who is he, sir?" the man asked. "Tell me so that I may believe in him."Jesus said, "You have now seen him; in fact, he is the one speaking with you."Then the man said, "Lord, I believe," and he worshiped him.

The Father's assignment given to Jesus remains our spiritual calling today:

To open eyes that are blind, to free captives from prison and to release from the dungeon those who sit in darkness (Isaiah 42:6-7).

A survey showed that most people would go with a friend to church if they were only invited. Do you have at least one friend who might go to church or to a Bible study with you? Invitations are small things to issue. When you invite someone, you offer huge possibilities.

You offer release from a dungeon of darkness into God's pool of mercy.

"Pool of Mercy" by Cathy Messecar is licensed under a Creative Commons License. Heartlight encourages you to share this material with others in church bulletins, personal emails, and other non-commercial uses. Please see our Usage Guidelines for more information.