Looking beyond Our Pigeonholes

You know you don't fit, so why climb into someone else's pigeon hole for you?

by Rubel Shelly (09/06/2013) | Leading in Hope
I wonder if the words stung him? After all, he knew what the people around him were thinking even before they said it out loud. Many a person has lost her or his zest for life by overhearing their equivalent.

Jesus had been teaching in Galilee, and it had created quite a stir. Lives were being changed. People were seeking God, being generous to the poor, and renewing their marriages. Mighty works were being done to restore sight to the blind and soundness of limb to crippled folk. Then he came to his hometown.

Once in Nazareth, he made his way to the synagogue and began to teach those who were there. People were amazed by his wisdom and insight. Then somebody spoke the disarming words that threw a monkey wrench into the gears of what might have been at Nazareth.

"He's just the carpenter's son, and we know Mary, his mother, and his brothers — James, Joseph, Simon, and Judas. All his sisters live right here among us. Where did he learn all these things?" (Matthew 13:55-56 NLT).

Our word for it is pigeonholing. Everyone does it at one time or another. With a wave of the hand, some person or idea is summarily dismissed. It is a convenient way to display ignorance and prejudice. Carpenter's son. Dropout. Trouble-maker. Liberal. Ex-con. Hopeless drunk. Dumb. The list goes on and on.

A lot of people who are pigeonholed accept their label, live with it, and confirm it. Not many youngsters who are given the tag "slow learner" at school will do what Thomas Edison or Albert Einstein or Gandhi did with it. They will accept the judgment and act it out as a self-fulfilling prophecy.

Don't give in to somebody's pigeonholing of you.
People who accept another's stereotyping of some third party cut off the possibility of relating to him or learning from her. That's what happened at Nazareth that day. "And they were deeply offended and refused to believe in him." Jesus was charitable about the whole episode, just quoting an old proverb about how prophets never receive honor in their hometowns. 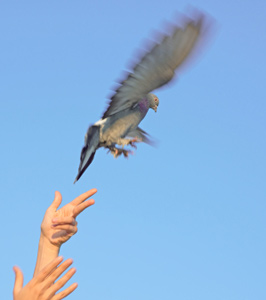 Because his own ego was secure, Jesus did not abandon his mission. He just moved on from Nazareth to other villages where he could get a fair hearing — without being dismissed on the front end by some know-it-all. Although he didn't suffer for its prejudice, Nazareth did:

"So he only did a few miracles there because of their unbelief." Why should he? It would have been casting pearls before swine, for they had already found an effective way to diminish his deeds and dismiss his teachings. It's only the carpenter's son.

Don't give in to somebody's pigeonholing of you. Be secure enough in Christ to pursue whatever dream is important to you. As Jesus did that day in Nazareth, remember whose child you really are.

"Looking beyond Our Pigeonholes" by Rubel Shelly is licensed under a Creative Commons License. Heartlight encourages you to share this material with others in church bulletins, personal emails, and other non-commercial uses. Please see our Usage Guidelines for more information.