A No! Church (And how to Avoid Becoming One)

Want to make sure nobody bothers you by coming back? 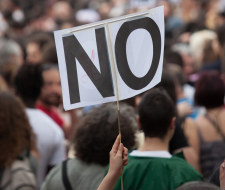 by Mark Frost (05/25/2013) | Leading in Hope
It was a Sunday morning. We were on vacation out of state. Our clan of four approached the morning with a mix of eager anticipation and anxious trepidation. We were visiting a church we had never before attended. On the one hand, we enjoyed meeting brothers and sisters in new locations. We liked making new connections with the churches we visited. On the other hand, walking into a strange environment full of strangers is always a little scary. And when you have two small children in tow, whose idiosyncrasies are not known (or appreciated) by these unfamiliar people, the prospect can be a bit unnerving.

We had found a nearby congregation in the yellow pages. The nice-sized, attractive ad promised us that "a warm welcome awaits you at the _____ Church." That was encouraging. I jotted down the street address — this was long before GPS — and joined the family in the car. I was pleased to find that the street on which the building was located was a major thoroughfare in town. We scrutinized the street numbers as they climbed toward the number I had scrawled on my scrap of paper. And then we passed it.

It took us two trips around the block before we noticed the outline of the church's roof hiding behind the local businesses that fronted the street. After a third circumnavigation, we discovered that the entrance into the church parking lot could only be accessed through the lot of one of those businesses — a funeral home, to be specific.

By this time, we were late for class. We found ourselves in a lot full of cars, devoid of people, facing a building with three double doors spaced evenly across (what appeared to be) the back of the structure. I could hear Monty Hall's voice in my head: "Which do you choose? Door number one, door number two or door number three?"

The teacher was focused single-mindedly on his material; he never missed a word as he continued his lecture, oblivious to the bewildered adults and two squirmy children behind him. After what seemed to be a long interlude, a class member finally asked, "Would you folks like a seat?"

I nodded "yes," and the questioner motioned us to a couple of empty seats (not next to each other, by the way). We started towards them. No one offered to move so we could sit together, nor did anyone offer to help us find classes for the kids. I finally approached the brother who offered us seats and whispered for his help in finding kids' classes. He pointed at a hall, and gestured, "Down there."

After class, we collected the children and headed into the auditorium, a few rows from the back, we managed to find some seats together. Not long after we parked ourselves on the pew, a ten-year-old boy came speeding out of the classroom wing. He zoomed like a jet fighter right to our pew, then pulled up short, obviously startled.

Fortunately, his Mom arrived just a moment later and explained to him that they would need to find another place to sit that day. But she threw an annoyed look our way as she shepherded her son into the row behind us. 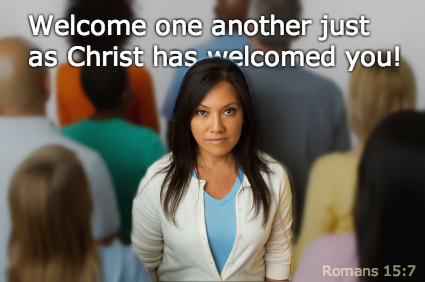 As might be expected, no one acknowledged us during the forced, "Greet the folks around you" portion of the service, nor did anyone introduce themselves as we exited at its conclusion — this time through door number one. We couldn't help but wonder, "Just where was that warm welcome they promised?"

Of course, we survived this incident with our faith intact. And one might say that this church's "sin" was little more than a lack of attention to detail. But I can't help wondering how the scenario might have played out had I been a struggling soul tentatively trying out church, desperate for hope, help and encouragement. And I wonder if what we experienced that day might be symptomatic of a deeper problem: a church grown content to cater to insiders because welcoming outsiders is just too much trouble.

Certainly one visit does not qualify me to make judgments about that church's character. But I have seen churches become so insulated that they essentially become "No!" churches. To anyone seeking entrance to the kingdom, their attitudes, words, and actions shout "No!" To strangers needing help and attention, they respond "No!" When a little care and kindness might make the difference, they decide "No!"

Jesus didn't think like that. He welcomed all manner of people. He lived an "open door policy." And some of his harshest words were reserved for those who "shut the door of the kingdom of heaven in people's faces. You yourselves do not enter, nor will you let those enter who are trying to" (Matthew 23:13 NIV).

The Apostle Peter (at the pivotal Jerusalem council recorded in the book of Acts) made it clear that the true calling of the body of Christ is to be a "Yes! Church": "I conclude that we should not cause extra difficulty for those among the Gentiles who are turning to God" (Acts 15:19 NET).

"Hey, you're in my seat!"
A "Yes! Church" anticipates the "extra difficulties" that might confront a person who is unfamiliar with church (much less faith!) and then works to eliminate them. In appealing to his fellow leaders in Jerusalem, Peter insisted people be accepted based on their faith and their embrace of the grace of God. Period (Acts 15:9-11). Any other "yoke" placed on them is not only unnecessary; it is an outright repudiation of the gospel (Acts 15:10).

A "Yes! Church" receives sinners who have been saved by the grace of Jesus without requiring them to conform to a dress code, adopt a particular political viewpoint, or adhere to a set of superficial behavioral norms. A "Yes! Church" embraces new believers who are anxious about whether or not they "measure up," assuring them that they are fully loved and fully accepted by their heavenly Father. A "Yes! Church" trusts the Holy Spirit to bring about needed changes in lives that are out of step with His character. And members of a "Yes! Church" are humble and helpful, recognizing that they too are in need of the same refining fire to purge all vestiges of pride, arrogance, and self-reliance from their lives.

How can your church become a "Yes! Church"? 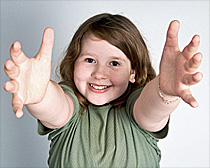 You embrace the "hospitality mandate." You recognize those who visit your congregations as "guests" visiting your home. You could begin by preparing to greet guests more effectively: putting up needed signage and training members in the fine art of welcoming the stranger. But the process can't stop there. It demands that you search for every worldly and man-made standard of acceptance that might be implied or imposed and mercilessly root it out until the only basis for fellowship and acceptance is one's reception of the "Yes!" that comes from the amazing grace of Jesus!

This is part of an ongoing series of message by a group known as Interim Ministry Partners: Phil, Greg, Mark, and Tim. Check out their website. Their focus is to help churches move from transition to transformation. Follow along the next several weeks as they share insight into becoming a "Yes! Church"!

"A No! Church (And how to Avoid Becoming One)" by Mark Frost is licensed under a Creative Commons License. Heartlight encourages you to share this material with others in church bulletins, personal emails, and other non-commercial uses. Please see our Usage Guidelines for more information.