Discovering the Character of your Church: 'Are' Values or 'Should' Values?

How do we get down to our true values?

by Tim Woodroof (09/22/2013) | Kingdom Leadership
Churches can get caught between the "rock" of their ideals and aspirations and the "hard place" of custom, comfort zones, and expectations. This "between" spot makes churches vulnerable to confusion, paralysis, and conflict.

Church A believes the Great Commission (evangelism and witness) should be the primary value of the church. They preach on the subject a great deal. They want to be effective at reaching their neighbors and their community. But the church's facility is in a downtown location and the surrounding community has changed dramatically over the past twenty years. Economics have soured. The racial mix of the surrounding population has altered. English is no longer the primary language heard on the street.

Yet, if you look at the way Church A actually operates, it seems barely conscious of these realities. The church's membership (and leadership!) is comprised of emphatically white, upper-middle-class, English speakers. Members drive to the church building from suburban homes. The problems of the urban environment are lamented more than engaged. There is no strategy for embracing and involving the people God brings to the church's door every day.

Whether it realizes it or not, Church A is dying. Members have gradually, steadily leaked away. Budgets are under increasing pressure. Foreign missions have supplanted local outreach in an attempt to scratch the evangelistic itch — but that involvement is largely financial. There is a growing tension between a faction who wants to sell the building and relocate to the suburbs ("Then, maybe, we can get our church back!") and the faction that wants the church to stay, make a redemptive difference, and become a multi-ethnic, multi-linguistic congregation ("That's what it means to be the church!").

It is easy to blame the challenges faced by Church A on changing demographics, external circumstances, and the urban blight so common in our cities.

When in fact, Church A has a values problem.

Consider a handful of values that are probably present (and competing) in Church A:

The difference between these two columns is not defined primarily by "right" and "wrong." It is not a matter of "Should" values being right and godly while "Are" values are mistaken and unworthy. You might question one or two of the "Are" values listed above, but it's hard to deny that they are rooted in either biblical teachings or human nature.

The prime difference between these two lists is what actually drives a church's behavior and decision-making. There is often a distinction between what a church claims to value and what, in fact, determines its actions. "Should" values are expressions of the church's conscience. "Are" values are expressions of the church's reality. Neither should be ignored. But, push-come-to-shove, "Are" values are a church's default. Unless they are "named" and deliberately challenged, they will continue to drive (and divide) a church regardless of its higher ideals.

In the book of Acts, there are numerous examples of churches wrestling with "Should" and "Are" values. Perhaps the most compelling example is the shift from a Jewish church to a Gentile church.

Now those who had been scattered by the persecution that broke out when Stephen was killed traveled as far as Phoenicia, Cyprus and Antioch, spreading the word only among Jews. Some of them, however, men from Cyprus and Cyrene, went to Antioch and began to speak to Greeks also, telling them the good news about the Lord Jesus (Acts 11:10-20).

Someone let the gospel cat out of the Jewish bag. Certain people talked to Gentiles about the good news. Barnabas and Saul went to work in Antioch ("...a great number of people believed and turned to the Lord" — Acts 11:21.). A Gentile church formed. And, as often happens in matters of faith, a conflict between "Should" and "Are" values arose.

Then some of the believers who belonged to the party of the Pharisees stood up and said, "The Gentiles must be circumcised and required to keep the law of Moses." The apostles and elders met to consider this question (Acts 15:5-6).

Consider a handful of values that were present (and competing) in the Jerusalem church:

"Are" values are not always wrong, but they are often limited.

It is easy (in hindsight) to question the motives and even the faithfulness of those "believers who belonged to the party of the Pharisees." We can't understand how they could ignore clear gospel values in favor of Moses.

However, look closely at the values that were driving their side of the debate. These people had cut their spiritual teeth on Moses and the law. They'd lived their entire lives under, shaped their lives by, submission to God's commands given at Sinai. They believed in the power of faith, but they also believed in the authority of God's word. "Accepting" Gentiles without requiring obedience to the law was not a form of mercy: it was a form of condemnation.

Peter, Paul, and James understood these values. In many ways, they shared them. But, for the sake of "Should," they challenged "Are." They called a meeting. They put the issues before the Jerusalem church. They listened to those who were driven by their allegiance to Moses and the law. They acknowledged how powerful and compelling those motives could be. They didn't kick anyone out of the church for arguing "Are" values.

But they clearly and robustly came down on the side of "Should" values. The gospel was different from Moses. The gospel trumped Moses. And where the gospel and Moses came into conflict, it was their determination that higher values must rule. They gave their reasons. They made their case. Openly. Directly.

"We should not make it difficult for Gentiles who are turning to God" (Acts 15:10).

And they put this determination in writing (Acts 15:24-29). They signed it in Jerusalem (in the presence of the gathered church) and sent it to Antioch in the hands of reliable witnesses.

Still (and this is an important point), "Are" values did not die easily. A commitment to Moses — however cogent the Apostles' reasoning, however clear the Apostles' decision — did not go away on the basis of a meeting and a letter. This issue (and the conflict between "Should" and "Are") dominated the agenda of the early church for the next thirty years. Evidence of the continuing tensions shows up later in Acts, in Paul's letters to the Galatians and Ephesians (to name just two), and in the epistles of Peter and James.

"Are" values steer a church's decisions and behavior — no matter what a church claims about "Should." Unless "Are" values can be named, challenged, refuted, and replaced, they will continue to determine the actions of the church. 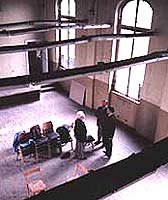 "Are" values are not always wrong, but they are often limited. "Are" values usually say more about us and our comfort zones than about God and his essential business. "Are" values invariably support the status quo rather than encouraging the church to create new skins to contain the new wine of the kingdom.

The only way to address the "Are" values of a church, to champion "Should" values, involves leadership: wise, theologically astute, assertive, confident, Spirit-led leadership. "Are" values will never change without leaders who are willing — for the sake of the kingdom — to stand up and be counted.

Yet before leaders are "counted," they need to do some "counting" of their own — counting the cost and recognizing the pain involved in challenging "Are" values. Churches can change, even in matters as central as values. Yet the change doesn't come easily. Leaders will pay a significant price in the attempt.

This is the first of four articles related to determining a congregation's core values and how these values — hidden or stated, operational or aspirational, personal or shared, and used with integrity — work in the life of a congregation. There series is called "Discovering the Character of Your Church" and are found with other resources for churches, especially churches in ministerial transition, on the Interim Ministry Partners Website. The articles in this series are:

"Discovering the Character of your Church: 'Are' Values or 'Should' Values?" by Tim Woodroof is licensed under a Creative Commons License. Heartlight encourages you to share this material with others in church bulletins, personal emails, and other non-commercial uses. Please see our Usage Guidelines for more information.