Where do we begin the work of genuine unity? 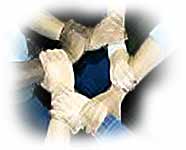 [Jesus prayed] "I am praying not only for these disciples but also for all who will ever believe in me because of their testimony. My prayer for all of them is that they will be one, just as you and I are one, Father — that just as you are in me and I am in you, so they will be in us, and the world will believe you sent me." (John 17:20-21 NLT, Ed. 1)

Unity, empowered by love, is that ever-elusive characteristic that Jesus prayed would define his followers (John 13:34-35; John 17:1-26). Jesus' prayer for his follower’s unity emphasized two primary results of that unity. First, Jesus prayed that the world would believe that the Father had sent Jesus to earth (John 17:21). Second, he prayed this unity would show that the Father loved both the Son and his followers (John 17:23). Jesus prayed his prayer for unity and protection for his followers shortly before being arrested, falsely tried, and crucified. In other words, this unity was the great passion of his last few hours before his death!

We should not be surprised, then, that the great battle in the early life of the church was for unity. The collision of a faith born in Judaism and the heritage of the Old Covenant of God with Israel as the Jesus movement transitioned into the Gentile world of paganism must not be underestimated. The future of the Jesus movement — his passion for unity for his followers — all hinged on the hugely important meeting of Jewish Christians, their elders, the apostles, and other church leaders in Jerusalem (Acts 15:1-41). What would be the basis of unity? Did the Gentiles have to keep the Law of Moses? Would the signs and symbols of Judaism be required of them? What would faithful Jews have to give up to maintain this fellowship? How could these widely differing peoples who all called themselves followers of Jesus share common table fellowship as well as the weekly fellowship of the Lord’s Supper? These and a host of other practical questions were on the line as they met. And, what can we learn from this meeting?

I’d like to share some things I believe I’ve learned about maintaining unity from this crucial event in the life of the early church. (I’m also asking you to share some of your thoughts on unity, as well, on my blog!)

The whole discussion was handled in the open with church leaders and church members — nothing was hidden and there were no “backroom deals" by a group who considered themselves the powerbrokers of the church (Acts 15:6; Acts 15:22).

The issue was discussed respectfully. Each group listened to the others and they focused on what God had accomplished among them and the implications of these things (Acts 15:12-13).

The truth of Scripture was honestly used to evaluate what had happened (Acts 15:13-18).

The conclusions, while definitely believed to be God-inspired, were shared with genuine humility (Acts 15:19; Acts 15:23-25).

The conclusions were clear and simply articulated, requiring certain moral standards and certain social accommodations to the Jewish way of life learned from Moses by Gentile Christians while calling on Jewish Christians to welcome their new brothers and sisters in Christ into God’s family without them having to fully become Jewish proselytes (Acts 15:19-21) (It is clear that the sexual morality focus was universally required in the new life of all Christians, but that the food restrictions were applied primarily in the regions where Jews and Gentiles regularly had fellowship with one another in the early days of the church — I believe that a careful reading of 1 Corinthians 6:1 - 10:33 and Romans 12:1 - 15:13 gives similar, but not exactly the same guidelines on these matters in regions mostly characterized by Gentile Christians.).

In addition to a letter to explain the basis of fellowship, real people representing both "sides" of the concern were sent with this letter to communicate and demonstrate this unity in person (Acts 15:22).

Seriously work toward this passionate desire of Jesus!
There was great joy in the celebration of a clear foundation for unity among believers with radically different backgrounds who built their new lives together in Jesus (Acts 15:30-31).

Unity doesn’t mean, however, that we will always agree on everything all the time. Paul and Barnabas' sharp disagreement on missions strategy that centered on the use of John Mark is a great reminder that unity does not mean uniformity in everything (Acts 15:32-41). Paul’s respect for Barnabas (1 Corinthians 9:6; Galatians 2:1-9) and Paul’s later use of John Mark (Colossians 4:10; Philemon 1:24; 2 Timothy 4:11) all testify to the importance of seeing ourselves as friends and partners in the Lord even after we have disagreements over strategy, procedure, and people.

Working toward unity among Jesus’ followers today is an awesome and seemingly insurmountable challenge. As denominational brand name loyalty continues to diminish, I pray that we can turn back to Scripture and seriously work toward this passionate desire of Jesus for his followers. Clearly other Scriptures must be applied to these principles (e.g., Ephesians 4:1-16; the book of 1 John); we must commit to share the passion of our dying Savior for unity. In a world increasingly without Jesus, there will not be enough light to illuminate the darkest corners if we do not find a better way of living out unity our Lord so much desires to see in us, his followers.

"I have given them the glory you gave me, so that they may be one, as we are — I in them and you in me, all being perfected into one. Then the world will know that you sent me and will understand that you love them as much as you love me. Father, I want these whom you've given me to be with me, so they can see my glory. You gave me the glory because you loved me even before the world began!" (John 17:22-24)

"Unity?!" by Phil Ware is licensed under a Creative Commons License. Heartlight encourages you to share this material with others in church bulletins, personal emails, and other non-commercial uses. Please see our Usage Guidelines for more information.