Which way would you run? 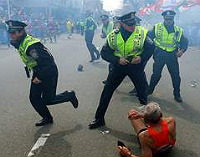 by Phil Ware (04/21/2013) | Two Minute Meditations
Like many of you, I was both horrified and amazed when I saw both video and still images of the bomb blasts near the finish line at the Boston Marathon. Horrified at the gruesome damage done to human lives by bombs intended to do what they did. Amazed again at the first responders — law enforcement, fire, and medical personnel — who ran "in the wrong direction" from the rest of the crowd.

While everyone was running away to escape the danger, these people were running toward the danger to help others. And they did this all week long in Boston. This was equally true of first responders in West, Texas, when a fire broke out at the fertilizer plant and caused a horrific explosion that killed at least nine first responders, leveled part of a small town, and wounded and killed many others.

What amazed me most was that their reaction "to run the wrong direction" — to run toward the trouble, to run toward the danger, to run to rescue the wounded and hurting — was that this reaction was instantaneous. These first responders had a sort of reverse instinct from the rest of us in the face of danger and destruction. While most ran away from danger or ducked for cover, these first responders turned and ran toward danger and possible death!

This reverse instinct "to run the wrong direction" in the face of danger and death moves us to something deeper than admiration or envy. Their confidence of purpose in the face of grave risks is something most of us are not sure we possess. We are even less sure we want to find out in the crucible of life and death realities to see if we do possess it. Yet stirring just below the surface of our conscious thought, there lurks the hidden realization that all of us, in one way or another, will have to face these life and death realities. Sooner or later, we are all going to have to decide "to run the wrong direction" in the face of our life's ultimate realities.

As we come to the final chapters of our journey through the Bible, The Story, we reach a point where we have to decide what we believe. We have to decide what truth we will build our lives upon. We have to determine if we have the courage "to run the wrong direction" from the rest of the world that has no real confident hope when confronted with the realities of physical death.

The old grizzled apostle Paul, now in his second imprisonment in Rome, finds himself in the cold, dank, dark, and oppressive confines of Mamertine prison — originally the two cells of the prison had been cisterns to hold water, which they didn't do very well, but they made great places to confine and torment those awaiting death in the most uncomfortable of surroundings. Winter is coming. A number of Paul's friends, converts, and apprentices have abandoned him. Some have even abandoned their faith in the face of Emperor Nero's persecutions (2 Timothy 1:6-12). Paul is alone and knows he is facing certain death. His requests are few — for Timothy to come to him, that Timothy bring John Mark with him, along with a coat and the parchments (2 Timothy 4:9-18).

In the face of certain martyrdom, this well-traveled, often beaten, imprisoned, and persecuted apostle of Jesus once again runs "the wrong direction" in the face of danger and death. By example, the ol' grizzled apostle also calls us to face danger with courage. He calls us to a hope that is stronger than death. He invites us to share a confidence that our future is connected to and invested in a Kingdom that cannot be taken from us by death:

As for me, my life has already been poured out as an offering to God. The time of my death is near. I have fought the good fight, I have finished the race, and I have remained faithful. And now the prize awaits me — the crown of righteousness, which the Lord, the righteous Judge, will give me on the day of his return. And the prize is not just for me but for all who eagerly look forward to his appearing (2 Timothy 4:6-8 NLT).

Like Jesus, Paul can say that not only did he finish what God called him to do, but that he finished strong! There's a victor's crown in his future! He is confident. He is ready. In the face of certain death for the cause of Christ, in the face of many abandoning him and the message he proclaimed to them, he chooses "to run the wrong direction" from the crowd and he chooses to run in the direction of Jesus, fully convinced that victory and deliverance and reward are ahead.

We began our thoughts today with admiration for first responders. We focused on Paul who shows us how to have that first responder's mentality in the face of life's ultimate crisis. But, I want us to finish with the real declaration of confidence that we, as followers of Christ, can have... all of us! Look again at the last part of verse 8. This confidence, this reward, this victory is ours!

And now the prize awaits me — the crown of righteousness, which the Lord, the righteous Judge, will give me on the day of his return. And the prize is not just for me but for all who eagerly look forward to his appearing (2 Timothy 4:8 — emphasis added).

Over a decade ago, our son Zach was driving his grandparents and fiancée (now his wife) home to our house for Easter weekend. About the time we expected them to arrive, I got a call from him.

"Dad, we're going to be a little late, because of an accident problem." Zach said calmly.

"One we are in... but don't get all upset and speed getting here, dad. Another accident won't help. I think we are all ok."

"So is everyone is alright?" I asked trying to disguise my panic.

"Well an ambulance is taking MiMi and Grandfather and Mandy to the hospital. Mimi is having some problems breathing, but I think we are all going to be ok!" This time, his voice seemed to quaver a little bit and my heart was pounding out of my chest.

It took me about fifty minutes to make it to the accident scene. I arrived to see Zach as the fire department pulled off his shirt and washed the glass dust out of his hair. I am thankful that I was able to see that he was physically fine, because about that time they pulled the car out of the ditch. When I saw it, and I saw how badly damaged it was from this 120 mph plus head on collision, I got the dry heaves and my knees buckled.

The cars had come over the top of a hill and were caught in a sudden downpour. Zach had slowed some in the rain, but the car coming the other way spun out of control and hit him head on. The driver admitted he had been going over 75 mph. Zach's steering wheel finished about 11 inches from the seat. The motor came through the firewall on his side of the car. The State Trooper was both shocked and amazed, remarking that he had never seen an accident of this severity and collision speed that didn't involve a fatality.

Having seen this kind of collision before, I told Zach I had never seen an accident with this much damage where the driver had not broken an ankle or hip or leg or arm from pressing the brake and holding the steering wheel. His response, as a twenty year old, blew me away.

"Dad, I assumed I was going to die and that my job was to keep the car on the road, but avoid as much of the collision as possible and not go over the side of the embankment. In a way, dad, this was a blessing, because you never are sure that you really believe what you say you believe. In that moment, I found out that I really believed it, and it made a big difference. I was able to relax and just try to do what I could to save everyone else."

The majority of the blow was on the left front of the car — Zach's side. Zach held the car on the road long enough to keep from rolling down the steep embankment and into the trees — something the state trooper said would have meant certain death. My twenty year old son, in the face of what he thought was certain death, chose "to run the wrong direction" to try to save his grandparents and his fiancée, and he did... and he did it with a calm and confidence that blew me away.

Zach decided in that moment — a moment when things happen so quickly and yet your mind seems to slow it all down and you can think of a jillion things at once — that he really believed what he said he believed:

And now the prize awaits me — the crown of righteousness, which the Lord, the righteous Judge, will give me on the day of his return. And the prize is not just for me but for all who eagerly look forward to his appearing (2 Timothy 4:8 — emphasis added).

There's a victor's crown in our future! We need to look carefully at those words and grab a hold of them and take them into our hearts. They can be our confidence when we face that ultimate reality when we have to decide what we really believe and need "to run the wrong direction" in the face of danger and possible death. When we need to believe that at worst, we are running into the arms of Jesus who is waiting to reward us with the victor's crown that no one can take away.

"The Wrong Direction" by Phil Ware is licensed under a Creative Commons License. Heartlight encourages you to share this material with others in church bulletins, personal emails, and other non-commercial uses. Please see our Usage Guidelines for more information.