Life as a Fourteen Year Old

Some things shouldn't have to be part of a fourteen year old's life experiences. 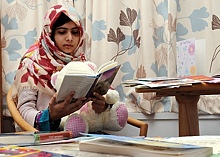 by Rubel Shelly (11/13/2012) | Leading in Hope
Fourteen should be a wonderful, carefree year in a child's life. Actually, being 14 is more nearly part of the bridge between being a child and becoming an adult. At so tender an age, a degree of maturity might well be making a child aware of the world and its ills; at that age, however, there should be no sense of being an adult who is responsible for fixing the world's misfortunes and evils.

Malala Yousafzai is only 14, and she seems to be something of an exception. In her home country of Pakistan first, then eventually at an international level, she has become an activist for education. More specifically, she has pleaded for adults in her part of the world to make education more widely available to girls.

Malala has the misfortune of living in a place where a rigid fundamentalist religion claims that girls should not receive the education boys are entitled to have. After all, as women they will remain answerable to their fathers, brothers, and husbands — with very few personal rights. They will be required to be subservient and docile. Cover their faces. Defer to men. Keep their mouths shut.

Today Malala is fighting for her life in a military hospital in the garrison city of Rawalpindi, Pakistan. Doctors give her slightly more than a 50-50 chance of survival. If she recovers, the degree of permanent damage is uncertain.

Last month, armed men stopped the school bus on which she was riding, called for her by name, and shot her in the head and neck. According to a spokesman for the Taliban — the fundamentalist Muslim group that eagerly claimed "credit" for the deed — it was Malala's fault. And the fault of her father.

She dared to go to school, and her father had permitted it. In the face of such "secular-minded" and "pro-West" behavior, said the spokesman, reverent and devout Taliban shooters were "forced to take this extreme step." If Malala survives, he said, more righteous warriors will be dispatched to finish the job.

That the attempted murder of a child happened in the name of religion only makes this story more disgraceful. The "righteous warrior" who would commit such an atrocity is evil beyond imagination. He is the right arm of Satan himself.

Islam condemns such behavior. So does Christianity. For that matter, so do atheists. All rational people recognize true evil for what it is — whether perpetrated by Muslims or Christians or Jews, by far right or far left.

People of goodwill from all backgrounds must stand up for freedom of expression, justice for minorities, rights for women, and protection of children.

An ancient Hebrew prophet, saying The LORD's own words, speaks eloquently to all religious people who miss the point of their religion:

"I hate all your show and pretense — the hypocrisy of your religious festivals and solemn assemblies. . . . I want to see a mighty flood of justice, an endless river of righteous living" (Amos 5:21-24 NLT).

Enough with making excuses for hatred. It is time for all nations and tribes, religions and parties to affirm human dignity, respect for one another, and love.

October 10, 2012 was World Malala Day.
Pray for Malala. And pray for us all to surmount our most sordid impulses.

Malala is in Queen Elizabeth Hospital in Birmingham, England. She is recovering well from this awful attack. Saturday, October 10, was celebrated around the world as Malala Day. For an update on Malala and World Malala day please check out the following links:

Supporters of Malala Yousafzai hand in petition for girls' education

"Life as a Fourteen Year Old" by Rubel Shelly is licensed under a Creative Commons License. Heartlight encourages you to share this material with others in church bulletins, personal emails, and other non-commercial uses. Please see our Usage Guidelines for more information.