Who's afraid of the big bad grave? 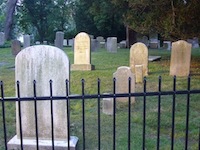 by Tim Archer (06/06/2012) | Hope for Life
Just as different nations have different holidays and memorial days, different families have seasons that are special to us. For our family, the end of May has become one of those times.

It began when my father-in-law, Luis Tolosa, passed away on May 27 at the age of 64. A few years went by, then it was Carolina's grandmother, who passed away on May 26. Another aunt died May 29 two years ago, then last year it was my dad, who left us on May 25. Four death anniversaries in five days; it's a time to remember those who have gone on.

I hate death. I worship the God who is life, and death is his natural enemy, the final enemy to be conquered (1 Corinthians 15:26). In a wonderful twist of irony,  Revelation pictures death itself being thrown into the fiery lake that is itself known as the second death (Revelation 20:14).

Jesus came to free mankind from the fear of death, or at least from slavery to that fear (Hebrews 2:15). Our innate survival instinct will always leave us with some fear, but we need not live as slaves to that fear. We know someone who has been there and back, and he has promised that we can overcome death. In  Revelation 1, Jesus says, "Fear not, I am the first and the last, and the living one. I died, and behold I am alive forevermore, and I have the keys of Death and Hades" (Revelation 1:17–18).

I love that last phrase. "I have the keys of Death and Hades." As I wrote in Letters from the Lamb about the letter to the church in Philadelphia:

In the case of Jesus, we need to remember that each of the letters refers to chapter 1 of Revelation. In the vision that John had of Jesus, Jesus had keys in his hand, the keys to death and Hades. It seems likely that Jesus is referring to the same keys here; the reference to the key of David is made to emphasize the permanence of Jesus' actions regarding death and Hades. Now that he has opened that door, no one can shut it again, until Jesus himself decides to do so. Christians can face death without fear, for their Lord holds the key to let them out of the realm of death. Their stay in Hades will be but a temporary one, for they know the One who holds the key. When he opens the door, no one can shut it again. When Christ spoke with Peter about having the keys of the kingdom, he also spoke about the gates of Hades, saying that they would never be able to prevail against his church. Jesus opens the door to the place where the dead are, and once he has opened it, no one can shut it.

I hate death, but I also face it with confidence. I know he who has gone before and trust in his power to keep his promises.

I hate death, but I also face it with confidence
Are you living a life of slavery to the fear of death? I want to help. Write to me with a question or comment at tarcher@heraldoftruth.org. Or visit our www.hopeforlife.org website.
(Expressed written consent must be obtained prior to republishing, retransmitting or otherwise reusing the content of this article. Contact us at info@hopeforlife.org)

"Death" by Tim Archer is licensed under a Creative Commons License. Heartlight encourages you to share this material with others in church bulletins, personal emails, and other non-commercial uses. Please see our Usage Guidelines for more information.