What do you fear? 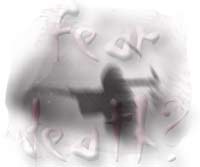 by Jamie Shell & Brent Nidiffer (02/25/2005) | Timely Truths
Many people suffer from various kinds of phobias today. Fear grips their lives. Some fear seeing the number 13, many have a fear of heights, and still others have a fear of being in a cramped, closed space. Whatever the fear, the greatest fear for many is the fear of death. Because of this fear, people have done some truly strange things trying to avoid its inevitability.

William Randolph Hearst built the great Hearst Castle near Morro Bay. He filled the structure with the most beautiful objects and art of our world. Yet whenever anyone visited, he had a standing rule that no guest in his home could ever mention the word “death.” Each night he was afraid to go to sleep because he was tormented by the fear of death.

The Bible teaches us that death is not the end. Daniel wrote of this truth: And those who sleep (die) in the dust of the ground will awake, these to everlasting life, but others to disgrace and everlasting contempt. (12:2)

Death is not the end.
Maybe there is a proper fear of death for some. But for those who “die in the Lord,” there is nothing to fear, for they will be the ones to receive an eternal reward. After all, this is why Jesus came, that he would not only win the victory over death (1 Corinthians 15:51-58), but so that he could also help us overcome our fear of death! (Hebrews 2:14-18)

"Fear of Death" by Jamie Shell & Brent Nidiffer is licensed under a Creative Commons License. Heartlight encourages you to share this material with others in church bulletins, personal emails, and other non-commercial uses. Please see our Usage Guidelines for more information.