Observations after a Trip to Africa

What are your observations from traveling outside our country? 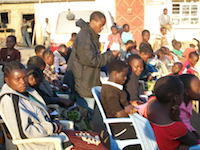 by Bill Brant (05/23/2012) | Hope for Life
50 hours in airplanes and airports and then another 12 hours in a van, going to the countries of Malawi and Tanzania in East Africa takes a lot of time from Abilene, Texas.

Herald of Truth, the mass media ministry I'm associated with, has worked in those areas for almost a decade, but this was my first trip to the African continent. It was last July, summer in Texas, winter in Africa, but it was warm in both locales.

During my nine day visit I experienced a number of things: policemen in Malawi toting weapons asking for a ride to their headquarters about five miles away, bicycles as transports for almost everything, friendliness of the people, security for an African president with military vehicles and mounted machine guns on all sides of the presidential entourage, Tanzanian traffic police pulling us over and asking for money because they were thirsty, Americans especially are seen as the super rich, and an African's hunger to fill both bodies and souls.

Thus I would like to offer some BO, Brant's Observations, derived from my visit to the African continent.

My trip was not that unusual from what others experience when they too go to Africa, but for me the perspective was eye opening and priceless.

So what are your observations from traveling outside our country? Join the conversation at www.hopeforlife.org.

"Observations after a Trip to Africa" by Bill Brant is licensed under a Creative Commons License. Heartlight encourages you to share this material with others in church bulletins, personal emails, and other non-commercial uses. Please see our Usage Guidelines for more information.