Not Quite as We Have Told It

It's not the road you think, but it's the destination you seek! 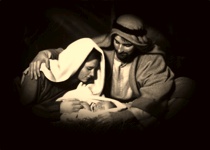 by Phil Ware (12/18/2011) | Two Minute Meditations
If we are honest, there simply are a lot of things that we get wrong about Jesus' birth. It's not that we don't care about the facts, we just seem to lose them in the mix of sentimentality and the re-telling of a story precious to us. As well-intentioned as we may be, we just get some things wrong:

When you strip these down and hear the story in its simple yet brutal beauty, it may lose some sentimentality, but takes on even greater power. A young engaged couple, expecting a child conceived by the Holy Spirit, goes back to their ancestral home and has no one who will take them in because they are unmarried and pregnant. They find an abandoned cave normally used to keep sheep safe. It is abandoned because the shepherds are in their fields at night during this special time of year.

Baby Jesus is wrapped in strips of cloth and placed in a stone watering trough for his bed. (For those who first heard these stories and knew the culture, this would sound eerily like the tomb in which he was placed in death!) The Lamb of God is rejected by family and people in power. The Lamb of God is welcomed by those who tended sheep as he slept where baby lambs would have slept. The shepherds in the fields could have been the very same shepherds who watched over the lambs slain at Passover, because that is what many Bethlehem shepherds did.

God with us, Immanuel (Matthew 1:23), was not welcomed into this world by those who knew Mary and Joseph. Jesus would save his people from their sins (Matthew 1:21), yet he and his family were rejected because everyone suspected he was conceived under "sinful circumstances" in their way of thinking. Shortly after Mary became pregnant, she left her home in Nazareth and went to be with Elizabeth in the hill country of Judea, probably because of her questionable pregnancy while she was engaged to Joseph (Luke 1:39). Even years later, Jesus would still hear the taunt that he was Mary's boy, implying that Joseph wasn't his real father and Mary's supposed sin had somehow tainted him (Mark 6:3).

At the end of Mary's pregnancy came the required trip to Bethlehem. Where is Joseph's family during this journey? They would have made the trip, but Joseph and Mary journey alone. After the long hard walk from Nazareth to Bethlehem, Mary had to give birth without the love or support of family — not because they weren't there, but because they had spurned Joseph and Mary! Mary had risked everything to follow the call of God — including the risk of losing the love and companionship of Joseph (Matthew 1:18-19). And Mary did all of this to offer herself to God as the servant of the yet to be born Messiah (Luke 1:38). And when Joseph joined her in this risk of obedience, he was ostracized, too!

No one is left out.
Such is the love of God for us … for all of us … those near and far from God … to show us that Jesus came to include us … each of us … all of us … in his mercy and grace.

So we see Jesus welcomed, worshiped, and proclaimed by Jewish shepherds (Luke 2:15-20), Iranian astrologers (Matthew 2:1-11), and angels from heaven (Luke 2:8-14). We see his birth recognized and feared by King Herod and his religious experts (Matthew 2:3-8). We find precious and devout servants Simeon and Anna, both long in years, rejoicing in his birth and proclaiming God's loving mercy in the Temple (Luke 2:22-28). We see his birth set in history in Roman time (Luke 2:1) and Jewish time (Luke 1:5-7). We see Jesus' genealogy traced through David and Abraham (Matthew 1:1-17) — with some Gentile detours through Gentiles like Rahab and Ruth — and we see it traced through David to Adam (Luke 3:23-37).

Bottom line, no one is left out. Whether we get some things wrong or we research every bit of minutiae, all roads lead to Jesus — whether those roads are traveled by Jews or Gentiles, the pitiful or the powerful, the righteous or the rebellious! Jesus is the story of God's love, the testimony to God's gritty grace, and the living witness of God's costly kindness for all people (John 1:14-18). And that story is consistent from beginning to end — from cave to grave, from heaven and back to glory.

May he be born in us this day and not lost in sentimentality or sanctimony of our season!

You can find the video here: http://hlt.me/tmlFpr

"Not Quite as We Have Told It" by Phil Ware is licensed under a Creative Commons License. Heartlight encourages you to share this material with others in church bulletins, personal emails, and other non-commercial uses. Please see our Usage Guidelines for more information.