Sometimes, you just have to believe 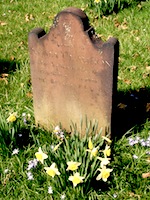 by Tim Archer (09/14/2011) | Hope for Life
There's an amazing story about Jesus and a man named Jairus who was a religious leader, one of the rulers of the Jewish synagogue. At that time, that would have made him unlikely to go see someone like Jesus. But Jairus went.

Jairus was able to convince Jesus to come to his house. But while they were on the way, someone came with terrible news: Jairus' daughter was dead. All hope was now gone. Or so Jairus must have thought.

But Jesus thought otherwise. He said to the grieving father: "Don't be afraid; just believe, and she will be healed" (Luke 8:50).

When they arrived at Jairus' house, people were standing outside, crying. Jesus told them: "She is not dead but asleep." They laughed at him, because everyone knew she was dead.

Except Jesus. That is, he knew she was dead. But he also knew that she wouldn't stay that way. Jesus went to the girl, took her by the hand, and told her to get up. And the young girl did!

It's a beautiful story. As a father, I guess I hear it differently than I once did. I can imagine if my daughter were desperately ill, how hopeless I would feel. And I don't even want to try and imagine how I would feel if she passed away.

But I know that Jesus' words would ring in my ears: "Don't be afraid; just believe."

More than 80 times in the Bible, people are told "Don't be afraid." Fear is a common element of our human condition. And there's probably no greater fear than the fear of death. One New Testament writer wrote that Jesus came to "free those who all their lives were held in slavery by their fear of death" (Hebrews 2:15).

As we find ourselves facing the imminent death of someone we love or even our own death, that's the time we need to hear Jesus' words: "Don't be afraid; just believe." Because even when the worst happens, Jesus can say, "They're not dead but asleep." He is able to take even the dead by the hand and wake them up. If we only believe.

Don't be afraid; just believe
I need that hope. I'm guessing you do too. If you don't feel that assurance, if your fear is greater than your belief, write to me at tarcher@heraldoftruth.org. Let's talk about it. Or watch some of the videos at www.hopeforlife.org and see how others have overcome their fears.

"Don’t Be Afraid; Just Believe" by Tim Archer is licensed under a Creative Commons License. Heartlight encourages you to share this material with others in church bulletins, personal emails, and other non-commercial uses. Please see our Usage Guidelines for more information.