Tell Them How Much!

So what do we do now that we've left the table? 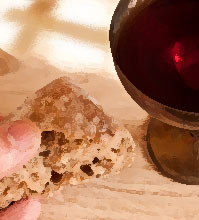 [Editor's Note: This is part of an ongoing series of messages that will be shared over the next year or so. They are offered to help us explore "God's Riches for Us at the Table of the Lord."]

He lived in a place of unspeakable darkness and evil. Living among the tombs near the water, where he was isolated, abandoned, and alone. He was feared by all who knew him or had even heard about him. He was unclothed. His body was covered with wounds where his skin had been torn and pierced. His hands and feet showed the visible wounds where he had been bound, yet had broken the shackles the crowd had used to try to control him. Dark evil forces so dominated his every thought that he had lost his identity. He was known by the legion of demons that terrorized his every moment.

When Jesus stepped out of the boat along the Sea of Galilee, this tormented man rushed to meet him. Jesus directly confronted the evil one and his host of demonic minions who controlled the man. We have no record of Jesus' followers getting out of the boat — and if I am honest, I am not sure I would have under the terrifying circumstances. Yet with a word, Jesus orders the demons out of the man and restores this man to his right mind. As the encounter between Jesus and the man draws to a close, we find the formerly demon possessed man fully clothed and in his right mind.

Jesus did not let him, but said, "Go home to your own people and tell them how much the Lord has done for you, and how he has had mercy on you" (Mark 5:19).

Apparently the man does this, because the next time Jesus goes to this same region, people come to him for help.

In another direct confrontation with the evil one, Jesus' body is bruised, battered, and pierced. Jesus is abandoned and alone, isolated and unclothed. He is the one bound hand and foot, nailed to a cross. Darkness envelops the moment as Jesus hangs on the cross and dies. His body is placed in a borrowed tomb as Jesus descends into death. Dark evil forces seem to control the moment and share in their apparent triumph over goodness, grace, and God.

We know that the story doesn't end here — not with darkness, evil, death, isolation, and a battered and pierced body. Instead, on the first day of the week, Jesus rises triumphantly from the dead. And as we come together on the first day of the week and gather around the Lord's Table to share in communion, we are reminded of Jesus' confrontation with the evil one and his triumph over evil, sin, isolation, death, and hell itself. The early church took the Supper of the Lord on the day of his victory, his resurrection, not on the day of death and defeat (Acts 20:7).

For whenever you eat this bread and drink this cup, you proclaim the Lord's death until he comes (1 Corinthians 11:26).

We declare our faith in a victorious future!
God's riches for us at the Table of the Lord remind us that we have a story to tell and a mission to "declare the praises of him who called you out of darkness into his wonderful light" (1 Peter 2:9). Without the high cost paid by Jesus and his triumph over sin, death, darkness, and evil, our future would have been the same as Legion! In victory, our mission is the same as the mission given to him:

"Go home to your own people and tell them how much the Lord has done for you, and how he has had mercy on you."

And when we share our story of deliverance with others, we do proclaim "the Lord's death until he comes."

"Tell Them How Much!" by Phil Ware is licensed under a Creative Commons License. Heartlight encourages you to share this material with others in church bulletins, personal emails, and other non-commercial uses. Please see our Usage Guidelines for more information.