What do we see when we look at how the early church met? 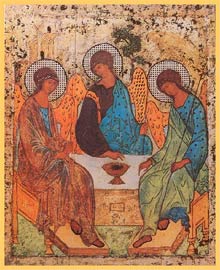 by Phil Ware (03/11/2010) | Two Minute Meditations
Imagine that you are one of the following: Rocky, Drew, Johnny, Mary, or Sally. Your small group has gotten together in the upstairs den of one of your group members, and suddenly there is a big stir. Folks come from all around the neighborhood, as well as other parts of the city, to see what in the world is happening. Rocky gets up and starts telling the story of Jesus. Before you know it, three thousand people have confessed Christ, turned their hearts to God, and been baptized.

Your small group suddenly has gone from a little over a dozen to well over more than you could have ever imagined! How are you going to grow these people as true followers of Jesus?

You learn some of these people are from out of town, so how are you going to grow them quickly into true followers of the Christ before they go home? How are you going help them with their basic needs until they do go home?

Interesting problems to have, for sure, because they bring huge challenges. With no internet, no public or private transportation, no phones of any kind, no supermarkets, and no public address system, how are you going to help this group of people grow and stay connected?

These are just a few of the actual problems that the church faced its very first day in existence! They go from a few followers in an upper room (Acts 1:12-14) to over three thousand in one day (Acts 2:41-47). And they weren't done. Before we turn around good, they have grown to over five thousand just counting the men (Acts 4:4) and people kept streaming in to their community of believers (Acts 5:14). Even with the problems of language, age, and culture causing some problems, they overcame these problems and the number of Jesus' followers "increased rapidly," even bringing in a group that had originally been their opponents (Acts 6:1-7).

So how did they do it?

They were devoted to what the apostles taught about Jesus, to sharing their lives with one another, to sharing the Lord's Supper and daily meals with each other, and to personal and public times of prayer (Acts 2:42-47). But, there had to be more than this that held them together organizationally.

So let's ask another question. How did they organize themselves to help people grow in the Lord?

This is where, I believe, we find the genius of the early church's community. They met publicly in the outer court of the Temple where large numbers could gather, and they met privately in homes where they could gather as smaller groups who knew each other well (Acts 2:46). This doesn't appear to be an accident or a one-time strategy. The apostle Paul later talked about using a similar strategy in Ephesus, in a very different culture, to grow followers of Jesus there (Acts 20:20).

We must recognize our essential need as Jesus' followers to have times when we gather with large groups of those who share our faith. At the same time, we also desperately need to meet regularly in our homes, in much smaller size groups, where we are known and can be encouraged based on our needs, and live in genuine community.

We know that the early believers met on the Lord's Day (Revelation 1:9-10), Sunday, to share in the Lord's Supper (Acts 20:7); to encourage each other to remain faithful and stir one another up to love and good deeds (Hebrews 10:25); and to set aside funds for those in need (1 Corinthians 16:2). This was sometimes done in large groups like the church in Jerusalem that met in the Temple courts, but it was also done in smaller settings like house churches (Romans 16:5; 1 Corinthians 16:19). Assembling on the day of the Lord's resurrection was a reminder of the victory and joy they shared because of Jesus' resurrection and was a tie to the apostles who were blessed by the presence of the Lord on those first two Sundays after his resurrection (John 20:1-19; John 20:26).

Yet we also hear about the importance of having close ties to others on a daily basis. The early believers shared this kind of fellowship (Acts 2:46). They were also commanded to encourage each other every day because of the challenges they faced in their daily lives as believers (Hebrews 3:12-14). It's in this context that the many "one another passages" take on added depth and significance. When we know people well and are involved in each other's lives on a regular basis, then we can be a special blessing, bring encouragement, hold accountable, greet each other warmly, and correct each other as we need it — see the one another passages by going here: http://bit.ly/cHEmFx.

Over the years, my experience in ministry has validated what I believe to be our need for regular larger gatherings with Christian believers and smaller, more intimate gatherings. Each size of gathering fulfills different needs we have.

Whether you want to call this biblical practice of large/small gatherings a "publicly/house-to-house" model, a proclamation/transformation model, or celebration/cell model, is not as important as participating. My prayer is that we won't let the wounds and frustrations in our past keep us from finding folks who are deeply committed to follow, honor, obey, and reflect the character and compassion of their Savior.

Each size of gathering fulfills different needs we have.

What are the blessings that can be received from gathering with a large group of believers who long to honor God as their Father, Jesus as their Savior, and recognize the Holy Spirit that fills them when they worship?

What are the blessings that can be received in doing those things in a smaller, more intimate group?

What are the dangers of only participating in large gatherings of believers?

What are the dangers of only participating in small gatherings of believers?

Where do you think the "one another passages" can most readily be faithfully practiced and why?

What makes them more useful in helping you in your day-to-day living for Jesus?

"Re: Vision 2020" by Phil Ware is licensed under a Creative Commons License. Heartlight encourages you to share this material with others in church bulletins, personal emails, and other non-commercial uses. Please see our Usage Guidelines for more information.