What kind of concept is this for a church? 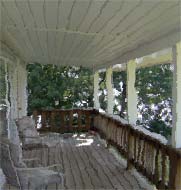 by Phil Ware (08/27/2007) | Two Minute Meditations
So many folks these days are interested in Jesus, but are truly turned off by organized religion. At least they are turned off by what they portrayed negatively in the media and reconfirmed by many who they feel mix politics and a self-proclaimed conservative religious orientation. (See Dan Kimball's "They Like Jesus not the Church" for a good, but shocking insight to this!)

More importantly, how do we communicate with folks who are anti-church so they know what the people of Jesus are really about? It seems that so much of our language is defensive and protective and many of our messages are focused on us not being corrupted by our culture. As a workgroup of ordinary working folks in our congregation focused on what they believed God was calling us to be as a church, one image emerged that was striking and powerful.

"We believe we are called to be God's community front porch. If you think about it, Starbucks has become our modern version of the front porch. We need to be something like that, except be a place where folks can come to meet Jesus." While these words are not a direct quote from one person, they are the clear sentiment of the folks who introduced this concept and forever changed the way we would view church.

However, a couple of objections were raised to help us think through what was being said:

Why is this image important?
Isn't the idea of a front porch a bit archaic and not understandable by those who are younger?

The answer to the first of these questions was pretty simple for anyone who has studied culture. During the late 80's and early 90's, a phenomenon took hold in modern American culture called "cocooning." With air conditioning, automatic garage door openers, pervasive television watching, long work days, and privacy fences, any sense of neighborliness vanished. People began "Neighborhood Watch" programs, but had to call neighborhood meetings to recognize each other by sight — while they might recognize their neighbors' cars, they didn't know their names or even much of what they looked like. With a high price paid for each square foot in a house, front porches became mere stoops or entryways. People hungered for relationship and community. They wanted to go where "people are all the same" and a place where "everybody knows your name." Many folks had lost any sense of neighborhood and it was important to many that they find it again.

However, we found that the second concern was legitimate. Most folks under forty today don't really know about true porches — big expansive places to sit in the shade, visit with family, drink lemonade or iced tea with neighbors, and wait for the sun to set and the house to cool down before going to bed. But as we surveyed young adults, we found that what the front porch symbolized — a place of friends and family, visiting and hanging out, a place to read or play the guitar and sing --was exactly what they knew they needed.

As we began to ramp up our ministry to local needs, this "front porch" concept took hold and powerfully began to shape our identity. Yet somehow, ironically, most of us missed the simple truth that this new self-concept was really quite old and extraordinarily biblical.

We find these words as a summary statement of that remarkable first Pentecost after Jesus' resurrection and Peter's famous sermon:

With many other words he warned them; and he pleaded with them, "Save yourselves from this corrupt generation." Those who accepted his message were baptized, and about three thousand were added to their number that day.
They devoted themselves to the apostles' teaching and to fellowship, to the breaking of bread and to prayer. Everyone was filled with awe at the many wonders and signs performed by the apostles. All the believers were together and had everything in common. They sold property and possessions to give to anyone who had need. Every day they continued to meet together in the temple courts. They broke bread in their homes and ate together with glad and sincere hearts, praising God and enjoying the favor of all the people. And the Lord added to their number daily those who were being saved. (Acts 2:41-47 TNIV underlining added for emphasis.)

Maybe this is just the image we need!
The public gathering space for the early followers of Jesus was in the court of the Gentiles in the enormous outer court of the Temple (1470 feet by 975 feet in dimensions). In fact, they met in a covered portico or porch along the 490 foot east wall of the Temple compound. This was called Solomon's Portico (Acts 3:11; 5:12; cf.  John 10:23). This was the place of much activity, business, and general visiting by the population of Jerusalem and visitors. Far from isolating themselves from everyday life and everyday people, the early followers of Jesus lived out their faith in the middle of everyday life in Jerusalem. This remained true until many of their leaders were driven from the city (Acts 8:1-5).

In an era when everyday folks were basically denied access to authentic faith, Jesus' followers lived it right in the middle of them. They didn't have to learn all the special traditions of the Pharisees, or be rich and powerful like the Sadducees, or have the birthright of a Priest or Levite, or separate themselves totally from societal corruption like the Essenes (the ascetics who preserved what we call the Dead Sea Scrolls). They could do their jobs, love their families, call on Jesus as Lord, and admit their need for cleansing through confession and baptism. Thousands did. And they lived out their life of faith on the front porch of their culture.

Maybe this is just the image we need to remove the defensive, anti-culture, retreat from society, and elitist thinking that threatens many of our churches today? Hmm ... maybe that's too harsh a judgment on today's churches ... what do you think?

And what do you think about seeing ourselves as God's front porch to a culture hungry for Jesus and yet turned off by what they think churches stand for?

I'd love to hear your take on my blog!

"The Front Porch" by Phil Ware is licensed under a Creative Commons License. Heartlight encourages you to share this material with others in church bulletins, personal emails, and other non-commercial uses. Please see our Usage Guidelines for more information.