Faces in the Crowd

What's standing in the way of us really finding health care? 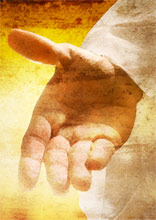 A large crowd followed and pressed around him. And a woman was there who had been subject to bleeding for twelve years. She had suffered a great deal under the care of many doctors and had spent all she had, yet instead of getting better she grew worse. When she heard about Jesus, she came up behind him in the crowd and touched his cloak, because she thought, "If I just touch his clothes, I will be healed." Immediately her bleeding stopped and she felt in her body that she was freed from her suffering.

At once Jesus realized that power had gone out from him. He turned around in the crowd and asked, "Who touched my clothes?"

"You see the people crowding against you," his disciples answered, "and yet you can ask, 'Who touched me?'"

But Jesus kept looking around to see who had done it. Then the woman, knowing what had happened to her, came and fell at his feet and, trembling with fear, told him the whole truth. He said to her, "Daughter, your faith has healed you. Go in peace and be freed from your suffering."

I'd love to know more about this woman, wouldn't you — this woman who was so desperate to be healthy that she was willing to defy social conventions and religious laws? For twelve years, she had lived with the bleeding. If it's the kind of bleeding it seems to be, then she had lived as well with the pronouncement of the Law that she was "unclean" (Leviticus 15:25-27). After so long, surely she had resigned herself to never being well, never joining in the joyful processions to the Temple for the festivals, never being a fully-participating part of the community. And, depending on how scrupulous her husband, family, and friends might have been, she might have resigned herself to missing much more than that. For at least some of the people around her, I imagine, any physical contact would have been out of the question.

So it's a true indicator of her desperation — and I think of her alienation from people around her — that she slips through the crowd to try and touch Jesus unnoticed. There's no raising of the voice from her, like the leper or the blind man who cried out to Jesus for healing. She doesn't even come and kneel respectfully, like the synagogue leader who got to Jesus just before she did. "If I can just touch his cloak, I'll be healed," she reasons.

She's quiet. Easy to overlook. She's OK with that, because that's just the way she wants it. If she can just "accidentally" brush against him in the crowd, then no one's the wiser. There will be no embarrassing confrontation, where she has to say publicly what's wrong with her and receive the censure and self-righteousness of her peers. If she can just brush against him in the press of the mob, she can go away well and no one will ever have to know why.

I wonder how many people in our world are like her. Sick, but quiet and overlooked. Unable to bear the cost of getting well, but unwilling to let anyone know. I wonder how many can relate to the words of Mark: "She had suffered a great deal under the care of many doctors and had spent all she had, yet instead of getting better she grew worse." Seniors, who have to choose which prescriptions to refill, if any. Kids, whose parents can't get them treatment for common childhood ailments that most of us never have to think about. Parents and grandparents who won't see their kids or grandkids grow up because they can't be screened for colon cancer or heart disease or high blood pressure. Young adults whose life span is shortened because they can't afford treatment for health problems that will only worsen over time.

Health care, of course, is the political issue of the moment, and however you paint it, it comes down to this one issue: What does a society that thinks of itself as moral and ethical do with people like that woman in that crowd? What do we do when there are people among us who are sick, but quiet and overlooked? Whatever we think of the President's plan, whatever we might think about the government's role in health care, we can't lose sight of the real issue. It's not about which political party looks better. It's not about our personal opinion of our President. It's about what we do as a people with folks who are lost in the crowd and left without access to the kind of care many of us take for granted.

She would have followed him anywhere!
Whatever our opinions and positions in the current health care debate, there's one opinion, one position, that is untenable for people who claim to follow Jesus. It's never correct for the church to say, implicitly or explicitly, "I've got mine — let them figure out a way to get theirs." As a Christian, if we don't want the government involved in health care, then our next statement has to be, "What can I do, what can the church do, for people who are lost in the crowd, unable to care for themselves and unable to make their voices heard?"

I'm so certain about that — and I believe you are, too — because we know what happened when that poor, sick, desperate woman reached out a hand in that crowd and touched Jesus. She found healing. And Jesus, not willing to let her remain anonymous, commended her faith and sent her away in peace. It seems like those closest to him never noticed her. Jesus could have ignored her, too. He could have suggested that she needed to work harder so that she could afford better health care. He could have questioned whether she even belonged in the country. But he healed her. He commended her faith. And he sent her away in peace.

And so I believe that Jesus' church should be the champions of those, like that woman, who reach out their hands in desperation and hope and faith, believing that God will take notice and heal them and their families. If not through supporting legislative reform of the existing system, then through individual efforts to facilitate access to existing resources. Only Jesus heals. But, the Lord's people can help to make sure that reaching hands can come in contact with the hem of his garment.

I know — that doesn't seem like the church's work. But it is. It was for sure Jesus' work (Matthew 4:23;  Matthew 9:35). Jesus didn't require that woman to be baptized first. He didn't make her listen to a sermon or volunteer in his ministry or straighten out her life. He didn't have to. When she reached out her hand in faith and found healing, oh my, she would have followed him anywhere.

People still will, when they reach out and find Jesus' people there to help. They'll follow him anywhere.

Whatever you think about the health care debate, don't ignore those reaching hands.

"Faces in the Crowd" by Patrick D. Odum is licensed under a Creative Commons License. Heartlight encourages you to share this material with others in church bulletins, personal emails, and other non-commercial uses. Please see our Usage Guidelines for more information.