But Can She Sing? 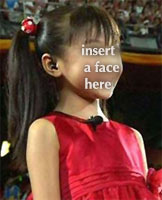 by Rubel Shelly (09/05/2008) | Leading in Hope
During the Olympic Games, news media pointed to several mini-scandals among the Chinese hosts that have blemished the event. First came the revelation that the spectacular fireworks display that opened the Games was mostly faked footage. Then we learned that the "voluntary" performers in the same ceremony were army personnel. There were more.

The most disheartening illusion foisted on us was the revelation that nine-year-old Lin Miaoke's performance of China's unofficial anthem was lip-synched. The actual child singer was a girl named Yang Peiyi. Why did the person performing the number not get the spotlight her talent deserved? She was judged not pretty enough for that shining moment of Chinese national triumph.

Shades of Western culture and values! Cute is valued above ability. Pretty is more marketable than skill. Or, as you get a bit older, sexy is desirable above intellect, talent, competence, or virtue. Hot trumps good practically every time. So a boob job or hair transplant is worth more to some than education or hard work.

Just think of what this reversal of values has done to American child stars whose lives have been destroyed by manipulation, exploitation, and greed. They skyrocket to the top in music or pop culture only to flame out in addictions, personal melt-downs, or — perhaps worse still — abandonment when their purpose has been served to the company or industry.

Getting back to Yang Peiyi, her teeth aren't straight. She doesn't have the photogenic face of the child chosen for television. She gives the appearance of being a bit shy in front of a camera. So she became a commodity for her voice.

And you certainly have to admit that Lin Miaoke has the perfect face for the role. She is adorable, with sparkling eyes, camera-friendly face, and bubbly personality. Oh, yes. Her teeth are perfect. But can she sing? We'll probably never know the answer to that.

Some have called it the "ultimate discrimination." It goes beyond race or ethnic features. It certainly has nothing to do with talent. It does not judge a man or woman by skill and performance. It is discrimination on the basis of looks — looks alone. Pretty beats plain. Hot trumps competent. Sexy conquers skilled.

Let's face it, for many roles in life it is important to combine skill with "presence" or ability with "charisma." There's nothing wrong with cultivating talent and teaching social graces, good hygiene, and appropriate persona. But, to put everything else in the back seat to appearances is simply shallow. It is a sad commentary on the way we have rearranged the price-tags of human worth!

It's simply shallow.
The Chinese Olympic organizers got caught. Let's try not to repeat their egregious blunder in our spheres of responsibility.

Charm can be deceiving, and beauty fades away, but a woman who honors the LORD deserves to be praised (Proverbs 31:30 CEV). But the LORD told him, "Samuel, ... people judge others by what they look like, but I judge people by what is in their hearts" (1 Samuel 16:7).

"But Can She Sing?" by Rubel Shelly is licensed under a Creative Commons License. Heartlight encourages you to share this material with others in church bulletins, personal emails, and other non-commercial uses. Please see our Usage Guidelines for more information.