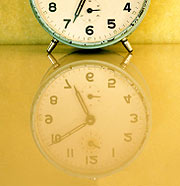 So you also must be ready, because the Son of Man will come at an hour when you do not expect him (Matthew 24:44 TNIV).

Imagine that you wake up one morning to somber news: a huge asteroid is hurtling towards earth. It will hit in one hour, and its impact will immediately wipe out all life on the planet. How would you spend those last 60 minutes on earth?

I know; it's kind of a bummer to think about. But, that's exactly the question asked by a recent survey conducted in Great Britain and commissioned by a publishing company to market a new novel. Fifty-four percent of respondents said that they'd spend their final hour either at the side or on the phone with loved ones. Thirteen percent said they'd spend their last moments on earth relaxing with a glass — or more likely, a bottle — of champagne. Nine percent answered that their last hour would be spent making love and two percent said that they'd enjoy their favorite fatty foods. Two percent admitted that, with an hour left to live, they'd start looting. (Although I suppose they wouldn't have much time to enjoy whatever they took!) Amazingly enough, only three percent of those surveyed mentioned prayer as a part of their last hour alive. Though, if you look at it in a glass-half-full kind of way, at least more people said that they would pray than loot.

I don't think I trust the results of the survey very much, but the story caught my attention because it represents an attempt to get people to think in a way that we don't usually think. It asks us to think about how our lives would be different if all that we assume and take for granted about the future was suddenly, dramatically, and drastically altered. It doesn't seem that anyone answered that they'd go to work for one more hour. No one answered that they'd take a nap. If she knew that life would end in an hour, there's not a student in the world who would finish that paper that was due the next day. If he knew that he only had sixty minutes left to live, there's not a person alive who would waste a second paying a parking ticket. Soldiers would lay down their weapons. Surgeons would put down their scalpels. No one would lose a fraction of that time doing anything simply because someone else wanted them to.

Left with one hour, we would distill life down to its simplest essence. We would ask one question: What matters most to me? And the answer to that question, and nothing else, would determine how we'd spend those final sixty minutes.

The more I read the Jesus in the gospels, the more I get the feeling that he was trying to get people to live with that "last-hour" kind of urgency, meaning, and purpose. I think we sometimes misunderstand this principle. I think we often understand him to be saying that we'd better "repent and be baptized" so we'll be "right with God" before he comes back and judges us. And so we do what we're supposed to do and then go about our lives, content in the knowledge that we're ready for his coming. But, I don't think that's what he had in mind — at least, not all he had in mind.

For one thing, he's always telling people to "keep watch." Not, "get ready." Not, "do this one thing, and then you'll be all set." It's "keep watch." By definition, keeping watch is a long-term activity. It's not something you do only at certain times. A watchful homeowner, so the parable says, stays alert all night. The faithful and wise servant, as Jesus tells the story, is found when the master returns doing what he was given to do. The watchful maidens, as the story goes, were ready for the bridegroom and able to go in with him to the feast; those who weren't so watchful were left out because they had to go get what they were supposed to have already had. The commended servants in the parable of the talents were those who had been doing business for their master in his absence. And it's those who are found caring for the hungry, thirsty, alien, poor, sick, and imprisoned when the Son of Man returns who receive the inheritance "prepared for them since the creation of the world."

I guess it's out of self-defense.
Urgency and purpose. When we understand that life is finite and that we don't really have that long, we distill it down to its simplest essence. We ask one question: What matters most to me? And the answer to that question, and nothing else, determines how we spend those final days or years or decades. Theologians call that an "apocalyptic mindset." Jesus just called it being "watchful."

Now, understand, that doesn't necessarily mean that Jesus is calling us all to spend our entire lives working among the poor in the slums of India or as a missionary in Africa or doing "full time church work" (whatever that is). You can be watchful in the career you've chosen by remembering that what God is using you to do among your colleagues or customers or patients is more important than your rapid advancement. You can be watchful as you raise a family by keeping in mind that your most important purpose is creating in your home a miniature of the kingdom of God. In school, or in your neighborhood, or wherever God has placed you, being watchful means operating from his to-do list, valuing the things he values, noticing what he notices, saying what he wants you to say, and doing what he has given you to do for those who are in need of compassion. It means remembering that one hour or another will be our last on earth, and that then he's going to hold us accountable for what we've spent our lives doing.

That doesn't have to be a scary thought. It's not that God is out to get you or that you have to pile up enough good deeds to balance out your sins. Jesus died and rose to secure our welcome into the Kingdom of God. It's just that what we profess ought to match the way we live; those of us who have asked to be let into the Kingdom through Jesus are expected to live like we're subjects of the King.

I guess it's out of self-defense that we pretend that we're going to live forever and that we'll have plenty of time later to do what really matters. The fact is, though, that what we're doing with our lives right now is what really and truly matters to us. And while it may have nothing to do with an asteroid, we can be assured that there will be one hour that actually is our last hour on earth. It might even be this hour. Whenever that hour is, may our Master find us about his business when he comes.

"Last Hour" by Patrick D. Odum is licensed under a Creative Commons License. Heartlight encourages you to share this material with others in church bulletins, personal emails, and other non-commercial uses. Please see our Usage Guidelines for more information.