Is an apology offered before the fact really an apology? 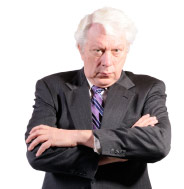 by Joey Cope (08/29/2008) | Leading in Hope
I was staring at the paper plate in front of me, trying to recall what I had just had for lunch. Slowly, I was able to piece together memories of beef with broccoli, fried rice, and egg roll. The momentary image gave me some pleasure.

Then I drifted back to the speaker. His opening statement was what sent my mind searching for something to occupy it. This fellow is a frequent contributor to our gatherings. He's been around a long time — a fact that he often brings up. But he's a discontented sort. I can't remember the last time that his comments were in favor of something — other than finding someone else to be in charge up the line of responsibility somewhere.

He has a companion in these strolls. She is less negative, but equally opinionated. When the two of them get started, I do a lot of deep breathing exercises. I would shut them out completely, except for the fact that they do make some good points. Yet, their delivery and demeanor makes it especially hard for me to be objective. Of course, that's my problem, right?

I've really been working on that. I just about had it under control until a new wrinkle appeared in his presentation. The last two or three meetings, he sits quietly while others add to the conversation. Then, at his moment, he slowly begins speaking these words:

"I am sorry for what I'm about to say. I apologize if I seem negative and difficult."

Those few words seem to ice the air in the meeting room. After all, most of the time what he says is negative and difficult. What could be coming if he thinks there's a problem with it?

In my view, if you have to apologize for something before you say it, you probably shouldn't say it.

After all, with just a few more minutes delay or after sleeping on those thoughts for at least a night, isn't it possible that you could come up with a better way to say it? One that could be more readily accepted by the hearer? You might even decide that you don't need to share those words. Or perhaps they would be better received by someone else.

As some one who deals with conflict all of the time, I understand that it is necessary for most people to express concerns — to vent their emotions. Even then, I believe that we can all work toward a better communication style. A strategy that magnifies the negative is rarely productive. Look at most of the political communications — particularly in a campaign.

Except in those rare debate competitions rich with rules and filled with judges trained to score the participants on style, effectiveness, and the rules, no one ever wins a debate. Most of us understand that the only effect of a real-life debate is to further entrench each side into their arguments.

Contrast "debate" with "conversation." I suppose the courteous debater might open with an apology. But, the effective conversationalist always begins with words that build relationship and invite understanding.

Of course, that's my problem, right?
So perhaps my colleague is a courteous debater. I am challenged to answer as a conversationalist. An apology offered to excuse future hurt is not one I'm prone to accept.

Of course, that's my problem, right?

Do not let any unwholesome talk come out of your mouths, but only what is helpful for building others up according to their needs, that it may benefit those who listen

Let your conversation be always full of grace, seasoned with salt, so that you may know how to answer everyone (Colossians 4:6).

"Misplaced Apology?" by Joey Cope is licensed under a Creative Commons License. Heartlight encourages you to share this material with others in church bulletins, personal emails, and other non-commercial uses. Please see our Usage Guidelines for more information.