The Real Root of Brokenness

We must not dare forget to give thanks for how we're blessed and how great the Father is! 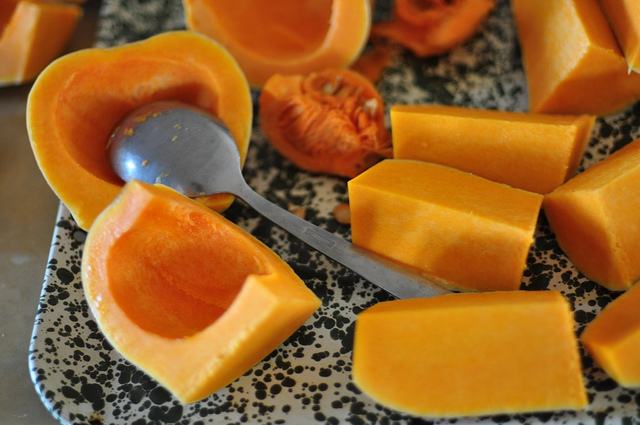 It’s after I cut the squash right open.

The two halves split and quartered there on the cutting board. After the paint brushes are washed out, after the pawns of chess game are all returned to their squares, after the potatoes are baked and served, the dinner plates are pushed back empty.

The Farmer splits the Word right open then and that’s when I’m cut to the quick.

“First, I thank my God…” That’s what it reads, right there in Romans 1.

The Farmer reads it slow — what should always come in the beginning.

And Paul, he writes more, peels back the hot holiness of God. I hold it there in my hands.

These are the holy words that hollow me out.

For the wrath of God is revealed from heaven against all ungodliness and unrighteousness of men….

For what can be known about God is plain to them, because God has shown it to them…

For although they knew God, they did not honor him as God or give thanks to him, but they became futile in their thinking, and their foolish hearts were darkened…

And since they did not see fit to acknowledge God, God gave them up to a debased mind — to do what ought not to be done.

The light fills the cups on the table.

I can feel it’s warmth on the nape of my neck. Spring might be coming? The hot heat of it melting everything cold.

One of the best writers I’ve read and a kind friend, Pastor and fellow Canadian, Mark Buchanan, he’d asked the most critical questions of them all:

What is the root sin, the molten core of wickedness and godlessness — that convinces God to turn us over?” (Mark Buchanan, The Holy Wild

Isn’t that what we have to figure out?

It’s right there in Romans 1.

It’s not the sinfulness that you’d think:

It’s the thanklessness — that we do.

It’s thank-lessness that first stirs the full wrath of God.

The beginning of Genesis and Romans 1 pivot on the same point: Eve’s thanklessness for all God does give and her resentfulness of the one fruit He doesn’t give, this is the catalyst of the fall. Which Romans 1 confirms: “For although they knew God —they did not… give thanks to him, but they became futile in their thinking, and their foolish hearts were darkened.”

Our fall is always first a failure to give thanks.

The pride of thanklessness always comes before the fall.

God’s makes Himself plain and there’s no excuse — but they did not give Him thanks.

I have done this and just this morning, there spooning potatoes.

The house upended with ridiculously messy and wondrous living. Paint smeared on a shirt, across a table. The chess loser in loud tears.The stringy inners of squash all over the counter. Instead of falling on my knees in thanks? I fall into sin and anger.

G.K. Chestertonhad offered: ‘Thanks is the highest form of thought‘…

And Romans 1 concurs and expresses how non-thanks is the lowest form of thought — of life: “When we don’t give Him all thanks, all our thinking become futile.”

Thanks is the highest form of thought — precisely because it rightly orders everything: Us laid low. Before God on High.

But refuse to give God thanks? God lets our very lives become refuse. Our thinking becomes futile and God on High lets us live low.

“The heart of wickedness and godlessness is that: a refusal to glorify God. It’s the refusal to thank Him.”

It’s brings me up short, there in the noon light.

The root of godlessness is thanklessness.

Wickedness springs up in me — when I am thankless.

There is Buchanan’s startling realization: “All the wickedness in the world begins with act of forgetting.”

All the brokenness in the world begins with the act of forgetting — forgetting that God is enough, that what He gives is good enough, that there is always more than enough to give thanks for.

Forget to give thanks — and Who you forget is God.

In a thousand, infinite ways God turns His glory round for us to see, but we can shrug; we can turn a blind eye. And so He lets it come, what we want — and everything, us, it all goes black.

There is light at the table, these open pages filling with it.

Isn’t that what Paul is saying: When, in light of everything, we don’t turn to God in thanks…. God gives in to what we want… and turns us over to the dark…

Don’t bother to acknowledge God with thanks — and God no longer bothers you with Himself?

Our fall is always first a failure to give thanks1
I don’t know. I don’t know. Or maybe I do. Yes, cut to the quick.

“I printed out 21. Twenty-one of those “7 Gifts Good & Perfect” sheets? And if I did my math right?” She grins and glances over at her dad. The Farmer winks.

“Seven a day for 21 weeks — and that’s more than a thousand thanks for a thousand gifts.” Hope looks down at Romans 1 open before her.

“I’m turning my life around.”

Turn in thanks and everything turns — and you see that God doesn’t turn away.

And there is this:

A lack of doxology leads to depravity.

Doxology or dark — you decide.

Live Doxology — and you step into light.

If all our brokenness begins with an act of forgetting — then the act of remembering, the act of counting blessings, literally re-members us.

Hope’s hair’s radiant in the sun.

Her smile, this shining.

After lunch, I clean off the counter, gather up the squash inners, and Hope, she’s turned in the light, turned in thanks.

All these halves finding their wholes.


The Science behind Why Giving Thanks Turns Everything Around


One Thousand Gifts on sale for $5


How to be One of the Great Thinkers

Giving thanks in everything because we fiercely believe that Christ can redeem anything.

"The Real Root of Brokenness" by Ann Voskamp is licensed under a Creative Commons License. Heartlight encourages you to share this material with others in church bulletins, personal emails, and other non-commercial uses. Please see our Usage Guidelines for more information.