Have you ever thought about being a coach? 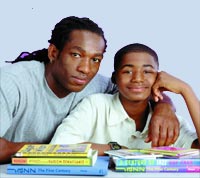 A few months ago I took a day off and drove to a small town in East Texas. It was a trip that had been at the top of my to-do list for a week. I wanted to talk to Edwin once more before he died.

He was thin and weak, but still sharp and alert. His first words to me were, "I have heard really good things about you and what you're doing."

Down deep I knew it would be like that ... he always found a way to help me see God in my life, even when I had lost my way.

I first met Edwin in 1969. He was a banker, a church leader, and a compassionate listener, but to me he was more than that ... he was my faith coach. We never used that term or spoke of that concept; no one did back then. He was always a step ahead of his time.

Edwin encouraged, pushed, motivated, and inspired me. He invested his life in my life. And, not just me, there are hundreds of people in East Texas who knew this gentle giant who had endowed us all with inspiration.

Edwin was a banker by vocation, but his passion, his calling, was to be a cunning and creative investor in people. And, I was blessed to be one of his accounts.

As I told him of the dream, the coaching ministry and the opportunities God was granting me, he listened with eagerness. It was as though my story and his story were the same. Not one challenge was left hanging in the air; he seemed to know the answers before I could share the questions. He grabbed every word; his eyes danced with joy and celebration. It was a God thing.

When it was time to go, I bent down to hug my coach who had invested in me so many years ago ... All I could say was, "Thank you for life."

And, he blessed me again.

A couple of weeks ago after nearly a century of life on this planet, Edwin Rasco turned in his worn-out physical body, but his spirit is still invested in people. And those people are investing in others.

For many years Dale arrived Sunday around 8am and put the children's classrooms in order, making sure that the attendance cards were properly distributed and that there was a pitcher of fresh water in each classroom.

He loved all the kids, and they loved him. He really loved "Messy Games Night." This meant that he might be seen with a big smile on his face, covered with whipped cream, mud and candied lifesavers. He was also good at "Crazy Monkey" and made everyone laugh. Many children said that, when they grew up, they wanted to be like Dale.

Dale sent creative, homemade cards to everyone on his prayer list and he made regular phone calls to encourage people. After his uncle died, he called his aunt to cheer her up. When he got her answering machine, he left a message in song: "I just called to say, I Love You." She kept that message and still plays it on days when she's feeling blue.

These events are still paying big dividends.
In this "it's all about me" culture, Dale was "all about everyone else." He had no theological credentials, but he lived his faith in a profound and influential way. He didn't talk much about what he believed; he just lived like he knew God.

Dale passed away not long ago at the young age of 37. The church was packed with hundreds of people from all walks of life, people from various age groups, economic and educational levels, and races. The gathering was a testimony that Dale saw people with none of the world's traditional distinctions. He saw past the differences.

Oh, did I mention that Dale had a child's mind in an adult's body. When he was about 14 months old, he had a seizure and suffered oxygen deprivation. His parents found him limp and barely breathing. They rushed him to the emergency room where doctors fought to save his life. They did, but he was left with significant brain damage, at least it seemed that way at the time.

Dale's investments are still paying big dividends. Lives have been changed forever and the accounts are still growing.

So, do you want to be a faith coach? Do you want to give your life to the task of investing in people? Are you ready to focus outside yourself? For some, it's a calling, for others it's a constant struggle, but for all believers, it's the secret to life the way it was meant to be lived.

Ask God to help you name the accounts (people) where you should place your investments. Be proactive, practical, positive, and powerful. Encourage, push, condition, and inspire.

Coach now, before you call it coaching.

"Coaches Invest in People" by Ron Rose is licensed under a Creative Commons License. Heartlight encourages you to share this material with others in church bulletins, personal emails, and other non-commercial uses. Please see our Usage Guidelines for more information.