Are you willing to get rid of the stuff in your life that is just in the way? 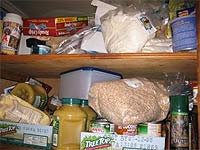 In anticipation of a construction project that will necessitate moving our church's food pantry, we've been doing a little cleaning at church. Like a lot of homes — maybe like your home, in fact — church buildings accumulate stuff. And while some of the stuff they accumulate is important and necessary, a good portion of it is "we-might-want-to-use-this-again-sometime" stuff. We have a lot of that kind of stuff lying around, waiting for "sometime." By the look of it, some of it has been waiting since the Nixon administration.

Anyway, watching people sorting through cabinets and shelves and throwing out stuff that's no longer useful has me thinking about the old stuff that one finds lying around church buildings. Old stuff like hymn books that are no longer used, or leftover Bible class curriculum, or old sound equipment, or broken furniture. It's got me thinking, as well, about old stuff like traditions, ways of doing things, values, and assumptions about the world around us and the community in which we live. I've been thinking about how most churches could stand to do some "uncluttering," for lack of a better word. I've been thinking how most churches need every now and again to look at all the stuff that's lying around and ask if it's worth keeping.

I wonder if that wasn't what Jesus was getting at with his "new wineskins" comment. I look at that, I look at where it's located in Matthew, and it starts to dawn on me what Jesus had in mind. He's announced to a paralyzed man that his sins are forgiven, and people are calling it blasphemy because forgiving sins is God's business. He's invited a hated, traitorous, corrupt tax collector to join his inner circle. (Imagine, for comparison, if he asked a businessman laundering drug money for the mafia.) The pious people have called him and his disciples out for not fasting. He's just about to be touched by a woman made "unclean" by her constant hemorrhage, and then he'll go on to touch an "unclean" dead body. He heals the woman and raises the dead little girl, but clearly he's giving the religious folks plenty of ammunition.

See, I think the folks that criticized Jesus for doing the things he did needed to clean out their church buildings, if you take my meaning. They had some stuff lying around that wasn't doing them or the people God called them to teach and lead and serve much good at all. They had some assumptions, traditions, and practices that were just taking up space, causing people to stumble, and getting in the way of the things that really mattered. But it was stuff that had always been there, and as far as they were concerned, always would be there. And so they left it in place and got very grumpy and impatient whenever someone tripped over it or wondered aloud if it wouldn't be better to toss it out.

It happens in churches!
It happens in churches. Stuff accumulates over the years. Oh, there's always a reason that it does, and usually it's a very good reason. At least at the beginning. Over time, though, the reason fades and what's left is the tradition, or the practice, or the assumption. I bet you can think of some stuff at your church like that. A lot of it is innocuous and harmless enough. I recently conducted an experiment at my church to try to find out why, after the servers pass the communion trays, one of them always comes back up to the front to put the lids from the grape juice trays back on the pedestals that the stacks of trays start on. The trays aren't there anymore, but someone always moves those lids. No one seems to know why, but there you are. (The best answer I got was, "I don't know: so there's room for the offering plates later?")

A lot of the old stuff that's lying around my church, and yours too, is like that. It doesn't interfere with anything, and doesn't take up much space, so why not hang on to it? And some of the old stuff is there for a really good reason, and shouldn't be thrown out unless it's for an even better reason. And some of it — well, it's the equivalent of walls and columns and floors and ceilings in a building. It's load-bearing, and to get rid of it would be to forsake the gospel and cease being the church.

So, really, I'm not advocating throwing out old stuff without discernment, just getting rid of the clutter!

"Uncluttering" by Patrick D. Odum is licensed under a Creative Commons License. Heartlight encourages you to share this material with others in church bulletins, personal emails, and other non-commercial uses. Please see our Usage Guidelines for more information.